Receding correlation of dollar index and crude oil prices is likely driving the recent resilience of the Indian rupee, making the currency a diversifier in the Asian currencies' space, analysts at Societe Generale Research said in a note on September 19.

“The oil-dollar price movements are back to being negatively correlated, from the anomalous March highs, when the Russia-Ukraine crisis was at its peak, and the Fed’s monetary tightening response to high inflation was in its nascent "25 basis point" stages,” Vijay Kannan and Kiyong Seong said.

“This drove both the dollar and oil prices higher together, thereby causing a high positive correlation. However, with more policy tightening being priced in to global markets, oil prices and the dollar have resumed their divergent paths causing the correlation to reverse into the negative territory.” 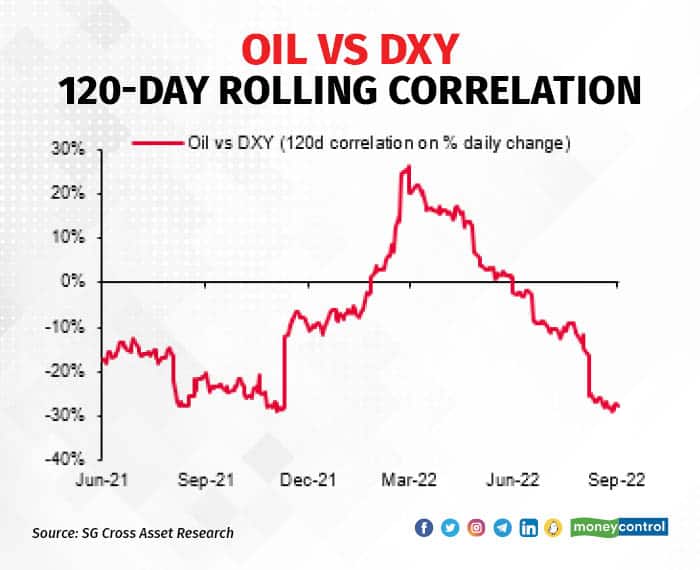 The reversal of the correlation has meant that the two major short-term drivers of the dollar-rupee exchange rate are now counter-acting their impact on the Indian rupee, and this has caused the correlation of USD/INR versus DXY (US dollar index) to reduce substantially in recent months, the analysts said. 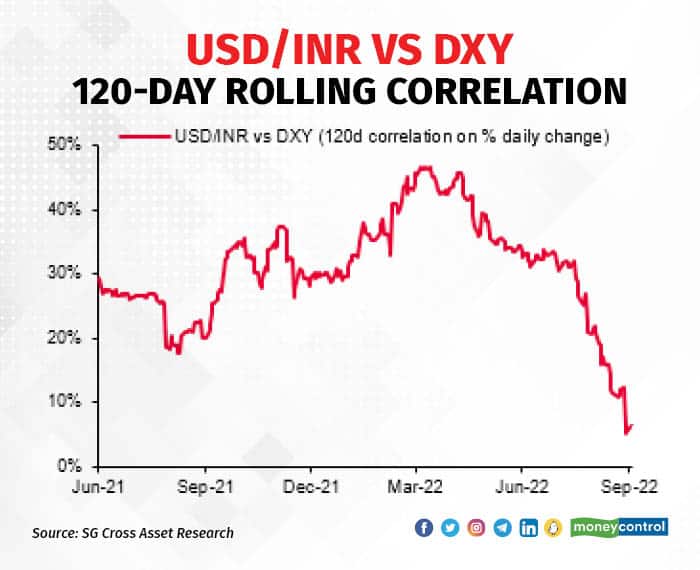 Reduced sensitivity of rupee to the dollar index has occurred in conjunction with the still-high correlation of other Asia FX to the dollar, as a strong dollar and a weaker yuan have driven bearish Asia FX sentiment in recent weeks.

A low correlation of the rupee to the dollar should enhance the appeal of the rupee, the analysts added. The Federal Reserve’s policy decision is due on September 21. The US central bank is widely expected to hike interest rates sharply as it seeks to curb inflation.

Aggressive Fed monetary tightening and US yield curve inversion have taken their toll on currencies of several economies.

On a year-to-date basis, the rupee has fallen over six percent against the dollar while several other currencies like the Australian dollar, Malaysian ringgit, South African rand, Chinese renminbi, and Thai baht have fallen around seven to nine percent.

Meanwhile, crude oil prices which had soared earlier this year to record highs after Russia's invasion of Ukraine have come off amid worries about a global economic slowdown.

Horror, sci-fi and comedies: Shows to watch on Netflix, Prime and Hotstar in October