Invest in businesses where there is decent earnings visibility coupled with valuation comfort.

Earnings in the final quarter of FY18 were marked by sustained traction and the prospect of capex in consumption-facing businesses, infrastructure spending by the government, and strong growth in commodity-driven companies and digital-ready information technology players. However, the disproportionately large losses in corporate-focused banks on account of elevated provisions marred the aggregate performance.

The aggregate picture is poor but for a reason

For the universe of over 7,700 companies, the growth in net sales at 8.7% was a tad better than the previous quarter. The jump in operating profit of 14.1%, too, was much better although the decline in aggregate profitability was solely due to the huge losses reported by the corporate lenders. If one looks at the Nifty, the disproportionate impact of corporate lenders is visible as well. While aggregate topline growth of Nifty companies was 11.5% (better than the previous quarter), the growth in operating profit at 15% was slightly inferior to Q3FY18, impacted by one-offs including Coal India’s provision for gratuity. There were several one-offs in several Nifty companies, hence the reported 16% rise in profitability ought to be adjusted. The adjusted profitability shows an overall decline weighed down by financials; ex-financials reported a modest growth. 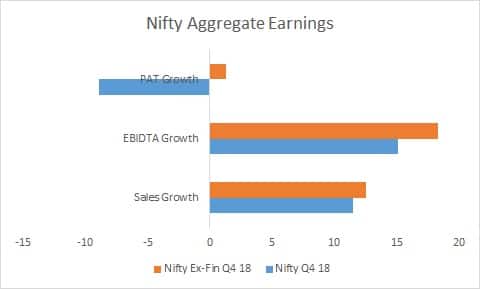 Barring Tata Motors, the automobile stocks in the Nifty, namely Mahindra & Mahindra, Hero, Bajaj Auto and Maruti reported steady underlying performance. Private banking lenders like HDFC Bank, HDFC Ltd, IndusInd and Kotak performed as per expectations. Yes Bank posted a strong show. ICICI Bank’s profitability was aided by a stake sale in a  subsidiary whereas the other corporate lenders like State Bank of India and Axis Bank reported losses. From the IT pack, TCS and Tech Mahindra reported an encouraging show, Infosys was steady, but HCL Tech and Wipro disappointed.

In the pharmaceutical sector, the disappointment on account of the price erosion in the US generic business continued. Sun Pharma showed a sequential (quarter-on-quarter) improvement although the rest like Dr Reddy’s and Lupin are yet to turn the corner. In the consumer space, Hindustan Lever reported a strong show, ITC was in line and Asian Paints had a decent performance. Larsen & Toubro too reported in-line numbers.

So while the aggregate performance wasn’t encouraging, the underlying performance, barring a handful of sectors, showed strength.

How did the broader universe fare?

Corporate earnings deserves a close scrutiny this time around as the correction in the equity markets over the last four months has opened a window of opportunity for the discerning. 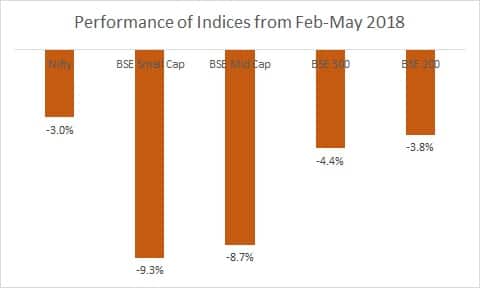 For the broader indices like BSE 200 and BSE 500, while the growth in sales and operating profit for Q4 FY18 was better than the previous quarter, the profitability declined, impacted by large quantum of losses from corporate lenders. However, it is heartening to note that excluding the impact of financials, the growth in profitability was better than the previous quarter. Thus while there are pockets of strength, overall the breadth of earnings have deteriorated. Hence investors have got to be careful.

The winners and losers from the season

The pockets of strength were seen in consumer-facing businesses like staples, white goods and automobiles. The weak base in the year-ago quarter on account of demonetisation coupled with a perking up of the rural economy were supportive for these businesses.

Cement was a positive surprise led by good volume in the east and central region while cost was essentially flat on a sequential basis leading to an improvement in margin over the previous quarter.

Metals were positive on firmer global cues and the continued tailwind of capacity shutdowns in China. IT was a mixed bag with early adopters of digital winning handsomely.

On the losing side, as discussed earlier, the biggest drag was corporate lenders, especially PSU banks that had to step up provisions on account of RBI’s  February 12 circular disallowing all forms of restructuring. Pharmaceuticals continued to be under the weather as well. On expected lines, telecom reeled under competitive pressure although hopes are riding on eventual consolidation in the sector resulting in improved pricing.

What should investors read into the earnings season?

While there are definite pockets of comfort in the market, FY19 threatens significantly higher macro headwinds. The imponderables range from fears of inflation rearing its ugly head on the back of rising commodity prices (especially crude) forcing an earlier-than-expected rate hike, to the strength in the global economy leading to a faster pace of rate hikes in the United States, resulting in capital outflows. Being an election year, political outcomes too will sway market sentiment.

In India, close to 50% of the earnings recovery in FY19 and FY20 hinges on the recovery in financials. While a lower provision from the second half of FY19 has higher visibility, the ability to grow the balance sheet especially for public lenders is contingent on their access to capital. 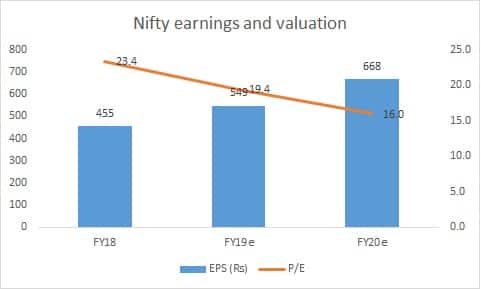 Even on this slightly optimistic assumption, valuation at 19.4X FY19e earnings isn’t cheap. So investors have got to place their bets wisely. We broadly recommend accumulating secular themes like consumption-driven businesses although they may look expensive.

The correction in the mid and small cap space has been sharp, but caution is warranted, as in several pockets the valuation has run ahead of fundamentals. Invest in businesses where there is decent earnings visibility coupled with valuation comfort. And keep an eye on the Moneycontrol Research page for well-researched investible ideas.