The Adani Group has become India's third conglomerate to cross $200 billion in market capitalisation with the shares of five of its seven listed companies soaring to all-time highs on Thursday.

Analysts said that stock prices of Adani Group firms surged after they expanded and diversified into multiple businesses leading to earnings visibility in the future. 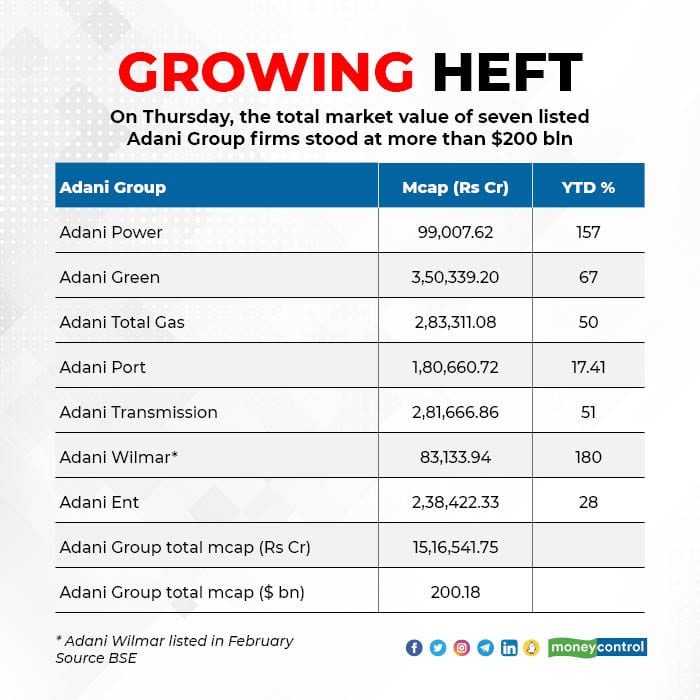 The total market cap of the seven listed Adani Group companies stood at $201 billion, according to BSE data. Earlier, Tata Group and Mukesh Ambani led-Reliance Group had achieved this milestone. Tata Group's current market cap stands at $320 billion, while the RIL Group is valued at $237 billion at current market prices.

"The current businesses are at a growing stage and are far away from showing their full profit potential. So, future growth potential and improvement in profitability might be the reason for increasing investors’ interest,” said Santosh Meena, Head of Research, Swastika Investmart.

"Investors are betting that it will be a major beneficiary of India's growth story," he said.

Analysts say some of the current businesses have shown an improvement in fundamentals while others have made announcements about entering sunrise sectors.

For instance, Adani Ports handled the highest ever cargo of 312.39 MMT (26 percent on-year growth) in FY22.

Adani Total Gas announced its entry into electric mobility by launching its first EV charging station in Ahmedabad and has plans to expand its network by setting up 1,500 such charging stations across the country.

“We believe that the future growth prospects have already been priced in the CMP and the stock is fairly valued,” said Vinit Bolinjkar, Head of Research, Ventura Securities.

Adani Power surged on expectations of better financials in the fourth quarter amid an increase in power demand as temperature soared across the country. Recently, Adani Power received dues with interest totalling Rs 3,000 crore from a state-run power distribution company in Rajasthan.

Adani Wilmar Ltd fortunes improved since listing on the back of higher volumes in edible oil. With sunflower oil supply being disrupted due to the Russia-Ukraine war, consumers are shifting their consumption to alternatives such as soyabean, groundnut and mustard oil, analysts said.