Crude oil futures down 1.39% on rise in US inventory, coronavirus economic impact

Crude oil futures slipped 1.39 percent to Rs 3,753 per barrel on January 30 as participants increased their long position as seen by the open interest. The fall was triggered by a rise in US inventories by 3.5 million barrels for the week-ended January 24 and fears that the increasing spread of coronavirus could have on global economic growth.

Fears of the virus impact on oil demand are increasing as major airlines cancelled or reduced direct flights to China and travel advisories issued by different governments led to drop in the number of passengers.

The value of the February and March contracts traded so far is Rs 3,350.13 crore and Rs 72.12 crore, respectively.

Crude oil price has given a negative break out from rising trend line channel, price is expected to trade negative. Sustaining below Rs 3,770 next leg of correction would drag price lower towards Rs 3,720-3,700 levels, according to Axis Securities. 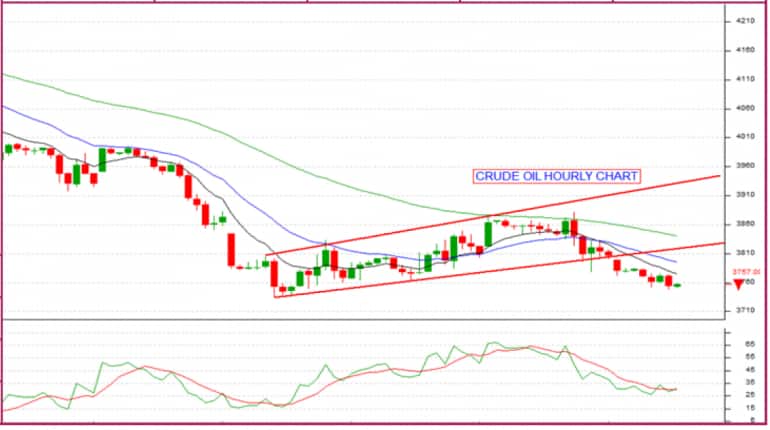 On hourly chart, price has been trading below 60 EMA which is a negative sign for price. The relative strength index is trading at 32 indicating low momentum in price.

MCX Crude oil has immediate support at Rs 3,770-Rs 3,680 whereas resistance is at Rs 3,790-3,840. Bias remains sideway to negative for the day, according to Motilal Oswal. The broking firm advised its clients to sell on rise targeting support level of Rs 3,730-3680.