A clutch of lenders, including SBI, BoI, and HDFC, have hiked their lending rates in the wake of the repo rate hike by the RBI on September 30. Home loan borrowers should pre-pay to ensure that the loan is repaid in the anticipated time frame

Retail consumers are beginning to face the heat of higher equated monthly instalments (EMIs) following the Reserve Bank of India’s (RBI) 50 basis point (bps) increase in the repo rate on September 30. One bps equals one hundredth of a percentage point.

A clutch of lenders, including the State Bank of India (SBI), Bank of India (BoI), and HDFC, have hiked their external benchmark lending rate (EBLR) after RBI’s rate increase. The repo rate, or the rate at which the RBI lends funds to banks, currently stands at 5.90 percent. Consumers’ EMIs are likely to rise further in the coming months given the likelihood that bank lending rates will continue to rise, experts and analysts told Moneycontrol on October 3.

Acharekar added that since the RBI had moved out of its accommodative stance and was focused on targeting the inflation in the backdrop of global happenings, there was a likelihood of a further hike in the repo rate in FY23. Hence, lending rates are also likely to rise further as banks would pass on the hike as much as possible to protect their margins, he added.

Also read: RBI’s 50-bps rate hike may be a pain for borrowers, but gain for depositors

How are lending rates stacked up? 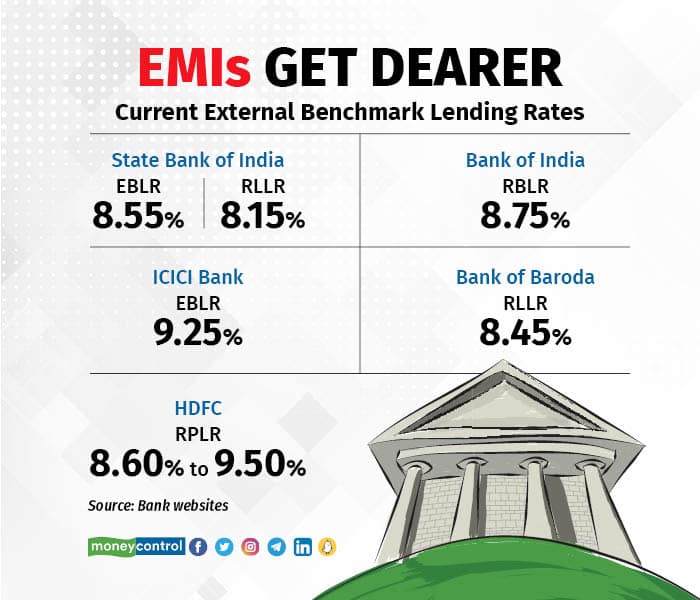 Rate cues from the RBI are transmitted in the banking system when lenders adjust their lending and deposit rates based on the rate actions from the central bank. For instance, if the RBI hikes the repo rate, it means that banks will have to borrow short-term funds at a higher cost from the RBI. This additional cost is passed on to customers through lending rate hikes. This curbs the demand for money.

The RBI’s Monetary Policy Committee (MPC) has increased rates by 190 bps since May to quell inflationary pressures in the economy. Economists expect the MPC to hike the repo rate further at its next policy meeting in December.

“At a portfolio level, lending rates will continue to inch up since EBLR-linked loans transmit rate movements faster,” said Jindal Haria, director at India Ratings. “MCLR takes time and is often more dependent on deposit rates, which too would go up in a staggered manner through the rest of the year.”

Also read: Six money rules for your wallet this October

Even though lending rates are edging higher, bankers and analysts do not expect the rate hike cycle to curb demand for loans. According to RBI data, bank credit registered a yearly growth of 16 percent in August.

“If we zoom out of the short-term rate hike cycle, we will see that the credit-to-GDP ratio for India is only 50 percent, whereas it's three times higher for countries such as China and the US. So we have a long runway to grow credit,” said Adhil Shetty, CEO, Bankbazaar.com.

Shetty said that in the current scenario where interest rates have risen sharply, it is advisable to pre-pay loans systematically. Consumers who had borrowed at under 7 percent recently would be the most adversely impacted as their loan tenors and EMIs would get bigger. “In some cases, we’re seeing tenors extend by more than 10 years. The way out of this is periodic pre-payment,’’ added Shetty.

Further, EMI step-ups will also help shave the months off the loan. The key is to pay off the loan within one’s intended timeframe, Shetty said. 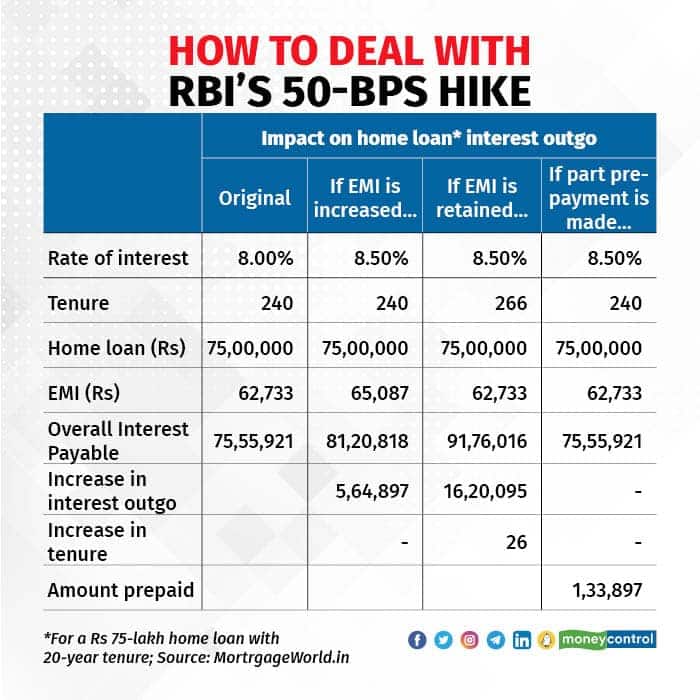 To fund the credit growth, banks are expected to mobilise deposits and raise funds from the market, said experts. Already, lenders such as Axis Bank, DCB Bank, ICICI Bank, and RBL Bank, have increased fixed deposit (FD) rates following the RBI rate hike. RBI Governor Shaktikanta Das, in his post-policy briefing, had said that there would be more traction with regard to the adjustment of deposit rates going forward.

“The competition for deposits would intensify and the dependence on wholesale funding could increase. This is reflected in bulk deposits (more than Rs 2 crore), rates of which are now materially higher than deposit rates for lesser amounts,” said Haria of India Ratings.

Going forward, the hike in deposit rates was likely to happen at a slower pace than lending rates in order to protect margins, said analysts. That may not be the case for small finance banks. Moneycontrol had reported on September 9 that small finance banks may face stress on margins as the rise in their deposit rates is higher than lending rates.

“Rate sensitivity is fundamental to banking and banks adjust deposit rates accordingly. Deposit growth will continue and may trail credit growth,” said CareEdge’s Acharekar. “Most banks have surplus liquidity due to COVID, which will get deployed as credit demand picks up.”

“We believe deposit mobilisation is the way forward. The hike in deposit rates would make banks an attractive source of investment for depositors,” added Malhotra.