Air travel during COVID-19: Are masks compulsory for children below the age of 2?

It's a question that is increasingly worrying parents, especially during this festive season that is also the peak travel time. Airlines in India have a different stance from their peers in the US

Nitin Sarin and his family have been raring to travel, having not stepped out of Chandigarh since January. The continued slide in COVID-19 numbers nationally has now encouraged the Managing Partner of Sarin & Co, which specialises in aviation law, to plan a short holiday to Goa. But there's a worry at the back of Sarin's mind.

Is it safe to travel with his daughter who will soon turn two? Is it mandatory for her to wear a mask? "It is impossible to keep our daughter in one place. And she refuses to wear a mask," says the lawyer.

Most parents of toddlers will relate to that; not just the challenge in keeping a restless, energetic child in check, but also about the concern of traveling with someone that young. What if the airline refused to let them board if the child doesn't wear a mask? One can't really force a child that young to wear a mask or a shield.

The concern especially builds after multiple instances of parents and their families being de-boarded in the US, after their younger members refused to wear a mask. A particular incident aboard a JetBlue flight went viral on social media in August, with the mother of a child who was refusing to wear a mask asking the flight attendant, "So should I tie her hands? What should I do?"

It's a situation that parents will want to avoid. Same with Sarin. With that concern in his mind, the aviation lawyer put out a question on Twitter, tagging IndiGo, Vistara and GoAir. Here's the tweet:

@IndiGo6E @airvistara @goairlinesindia my daughter is 1.9 years old, does she have to wear a mask?

Only IndiGo replied. "While we've employed stringent cleaning and safety procedures to ensure well-being of our customers, it is advisable that children/infant not to travel. We'd request you to get in touch with your pediatrician for better care of your lil one," the airline told Sarin.

The reply has made Sarin to hold off the travel for a while longer. The dilemma however continues for fliers, especially in the middle of a festive season, a favourite time to visit relatives and friends.

What the airlines say

Moneycontrol reached out to IndiGo, GoAir, SpiceJet and Vistara. While SpiceJet didn't respond, a GoAir spokesperson said the airline didn't have a specific advisory for its younger travelers.

A Vistara representative said that while the company advises children and senior citizens against traveling, it provides customised face shields for the  smaller ones. 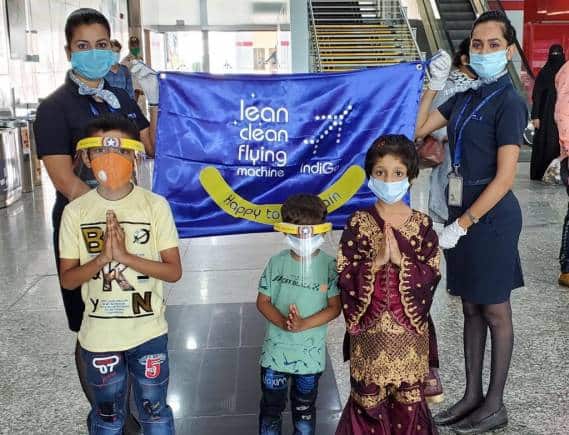 IndiGo has gone a step ahead. While the country's largest airline also advises against children traveling, if they still do, the carrier has made sure to entertain and keep them occupied during the flight. While it has come out with a customised safety kit for children, the airline has also tied up with The Unscripted Life, a Bengaluru-based maker of travel products, to launch a new product for its young customers. The Unscripted Life's travel store, The Mysticland, has downloadable books.

"It provides kids a digital platform from where they can access ‘Mystic Land’ workbooks which are destination led and comprise puzzles, stories, fun filled exercises and travel experiences which are highly engaging for them," the airline said in a statement to Moneycontrol.

"Every month a new edition of the workbook will be published with a new destination in focus. We launched our first edition last month with a focus on Kerala as a destination," a spokesperson said. IndiGo passengers got the book for free in the first month.

Bottomline: None of the airlines said masks are compulsory for children under the age of two.

Infection, and anxiety, among children

As of October 27, over 44 million people have been infected by the coronavirus. Of these, 29.8 million have recovered, and 1.17 million have succumbed to it.

India, 1.2 lakh people have died of the virus, which has infected nearly 8 million till now. Over 7.26 million have recovered.

The World Health Organisation says that children below the age of 18 represent about 8.5 percent of the reported cases, "with relatively few deaths compared to other age groups and usually mild disease. However, cases of critical illness have been reported."

Even if the infection rate may be lower, the pandemic has had multi-faceted impact on the children. "These effects are not limited to health and well-being but extend to many dimensions of children’s lives, education, safety, and poverty," says Anant Kumar, Associate Professor in Xavier Institute of Social Service.

The psychologist recently co-authored an article on the impact of COVID-19 on children for UK-based The Association for Child and Adolescent Mental Health. "Due to lockdown, many children have had no physical access to friends, peers, schoolmates, and relatives for over six months. Limited or no opportunity for outdoor play and socialization may also impact children adversely, making them easily bored, angry and frustrated. Agencies working on children’s issues have also expressed their concern that heightened anxiety and stress on families due to COVID-19 may lead to an exacerbation of mental health problems in children," he adds.

Little wonder, that travel is seen by many families as a way to beat the stress.

Moneycontrol spoke to a few executives from the aviation sector. All of them said children can be seen taking flights. "The numbers may be lower compared to pre-COVID-19 times. But I saw even infants traveling," said an executive.

What can parents do to limit their children's exposure to the virus, while traveling?

"Parents have to restrict their kids movement by carrying them or putting them in the prams once they are in airport," says Dr. BK Vishwanath Bhat, Pediatrician and MD of Radhakrishna Multispecialty Hospital, Bengaluru.

"One has to maintain social distance from others so that their kids do the same as well. Hand sanitisation should be done frequently for kids. Those above the age of two can wear mask and face shields," adds the doctor.

"Long distance traveling is better avoided till COVID-19 vaccine is available and is taken by majority and this implies not only for those below the age of two years, but for everyone."

With inputs from Viswanath Pilla

Prince Mathews Thomas heads the corporate bureau of Moneycontrol. He has been covering the business world for 16 years, having worked in The Hindu Business Line, Forbes India, Dow Jones Newswires, The Economic Times, Business Standard and The Week. A Chevening scholar, Prince has also authored The Consolidators, a book on second generation entrepreneurs.
Tags: #aviation #Business #coronavirus #India
first published: Oct 29, 2020 07:54 am