The author will attend the Ubud Literary Festival in Bali and the Singapore Writers' Festival in October-November 2022.

Ireland-born writer Audrey Magee lives on an island in the country. But before she decided on a writers’ quiet life, she worked as a journalist and wrote for, among others, The Times, The Irish Times, The Observer and The Guardian. 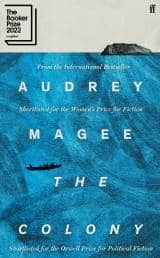 Magee studied German, French and Journalism at universities in Ireland before taking up writing full time.
Her first novel, The Undertaking, was shortlisted for the Women’s Prize for Fiction, for France’s Festival du Premier Roman and for the Irish Book Awards. Translated into 10 languages, the book is being adapted for film.

Her second novel, The Colony, was longlisted for the Booker Prize in 2022.

Moneycontrol spoke to her about her travel plans, among other things:

Any travels planned this year?

Yes! In October The Colony and I are going on a trip to Indonesia, Malaysia and Singapore. I will attending the Ubud Literary Festival (October 26-31) in Bali and the Singapore Writers' Festival (November 4-20), as well as doing some events in universities in the different countries. I am really excited to discuss The Colony in Asia.

The first thing you pack?

I haven't decided my English reading yet, though my French reading will be Leïla Slimani's Regardez nous dancer.

What will you be listening to?

I love radio; I can tune in anywhere to feel the pulse of a place.

Not really a big thing for me.

What food do you look forward to eating?

Anything with rice and Asian spices. I went to Sri Lanka while writing The Colony as it was emerging from colonisation and civil war just as Ireland did 100 years ago. I adored the food there, that blend of Indian and South-East Asian cuisine. Huge fan.

I live on a rock in the Atlantic Ocean. It's pretty far from things Mediterranean.
Pallavi Singh is an independent journalist and business historian in training at Queen’s University Centre for Economic History, Belfast. Views are personal. She tweets at @econhistorienne
Tags: #MC Travel Special
first published: Sep 24, 2022 06:04 pm