Duff and Phelps valued the badminton player to be worth $21.6 million in 2018. After her gold at the World Badminton Championship 2019, her endorsement fee ranges between Rs 1.2-2.2 crore. Though there are a few who believe her valuation will not go up much, one expert says her bronze win is likely to get better valuation than Mirabai Chanu’s silver win.

Badminton player PV Sindhu has bagged another medal at Olympics, making her the only Indian woman athlete to have won two medals at the games. The bronze medal at the Tokyo Games 2021 will increase her brand value, believe experts. She had won the silver at the Rio Olympics in 2016.

“There will be a premium on her (PV Sindhu), post the win in Tokyo. A 25 percent increase in her brand value is estimated. The win is big because it’s the first time an Indian woman is winning two medals at the Olympics," Darshan M, Founder of PLAY sports, media and entertainment Pvt Ltd, and a sports marketer, told Moneycontrol.

Brand expert Harish Bijoor, founder, Harish Bijoor Consults Inc, also said: "Sindhu, with her bronze, has the added to the allure of being a two-metal winner at the games. That talks consistency. This sure is a story to position her as someone who does it time and again. Her brand value is set to rise.”
Aviral Jain, Managing Director, Duff & Phelps - A Kroll Business, pointed out that back in 2016, post her success at the Rio Olympics (when she won a silver medal), PV Sindhu emerged as an overnight favourite for many brands, and she managed to add brands like Vizag Steel, Bridgestone India, PepsiCo’s Gatorade, Panasonic, amongst others to her portfolio.

Jain said that at the end of 2020, PV Sindhu had about 10 endorsements and her brand value was about USD 12 million.

He added that over the years, Sindhu has managed to maintain and expand her brand portfolio also because of the popularity she enjoys among the Indian masses.

While Sindhu has set a benchmark for sportspersons in India, unlike in Rio Olympics, the win this time may not bring a significant change to her brand value. From the time Sindhu won a silver medal at Rio Olympics, Bijoor had estimated a 400 percent increase in her endorsement fees.

But this time, Das said that the quantum jump in her brand value would not be significant, compared to the Rio Olympics.

How much is her brand value

Darshan explained why the effect on value increase will not be high. “Earlier, the increase was from a low base. Now, the base is already high. Amid non-cricketing athletes, Sindhu is already expensive."

Duff and Phelps valued the badminton player to be worth $21.6 million in 2018. In 2019, Sindhu was endorsing around 14 brands including Moov, Myntra and sports drink Gatorade, among other things.

After Sindhu bagged a gold at the World Badminton Championship 2019, her endorsement fees increased by 25 percent to 50 percent and ranged between Rs 1.2 crore and Rs 2.25 crore. 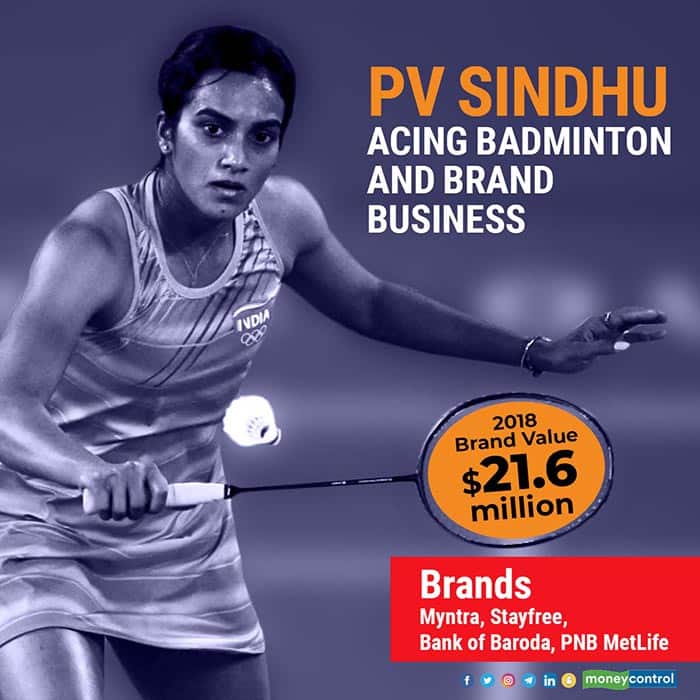 Compare this with top cricketers like Virat Kohli, whose endorsement fee is estimated to be around Rs 5 to Rs 5.5 crore. Despite being the highest paid woman athlete in India, brands still prefer cricketers over non-cricketers.

“For brands, the reach of the athlete is important. Brands associate with sportspeople for their reach and cricket is still more preferred as the price per contact has more value for money. Unfortunately, other sports don't have that reach," said Darshan.

This is why he said that there will be few brands which will make a decision on just this win.

"Few brands will take a knee-jerk reaction. If they had associated earlier, the reach (for brands) would have been good. Plus, brands cannot advertise on player jerseys during Olympics," he pointed out.

Adding to this, Dr Sandeep Goyal, MD, Rediffusion, said that while it is a good achievement and a proud achievement, it is not a value-enhancing achievement. Brand value does not get enhanced by one bronze victory.

‘A gold would have been different’

"A gold, yes, may have pushed up her brand value. She is a successful athlete and so she will continue to be," he added.

While the change in Sindhu's brand value is yet to be ascertained, Pavan Padaki, branding coach and author of Brand Vinci, said that Sindhu’s bronze win is likely to get better brand valuation than Mirabai Chanu’s silver medal win.

"This is because of the media exposure to Sindhu’s personality and stories around her rise to fame, which is more defining for brands to ride on. Glamour quotient, personality traits, cultural values, origin, the road to fame, photo- friendliness, association with other brands etc., all add up to determine the current brand value," added Padaki.