Nostalgia on a plate

During the pandemic, frayed recipe books, mothers, friends, neighbours have become the new providers of recipes, and succour; and cooking and sharing old recipes and childhood foods has made a comeback.

“What do you fear, lady?" Aragorn asked.

― J.R.R. Tolkien, The Return of the King

Like the caged bird, we now know the pain of being caged. Nowhere to travel. No freedom to spend an evening at a favourite restaurant. While eating-out options have dwindled, ordering-in also comes with a ladleful of wariness. In the limited-kitchen possibilities during the pandemic, old frayed recipe books, mothers, friends, neighbours have become the new providers of recipes - and succour, and cooking, sharing, experimenting and reviving old recipes and childhood food has made a comeback.

During the pandemic, the Proustian phenomenon (aroma/odour-evoked autobiographical memories) has become very palpable. The term comes from French writer Marcel Proust (1871–1922), who described In Search of Lost Time, how the experience of eating a madeleine (a small, often shell-shaped, sponge cake) transported him in memory back to childhood. HR professional Pragya Agarwal has been recreating the litti-chokha of her childhood home in Bodh Gaya, in Kuala Lumpur.

Far away from home, Pragya Agarwal lives the Proustian moment. A crazy-busy banking HR professional based in Kuala Lumpur, Agarwal often ordered in, ate out or rustled quick dishes. She would often fly to India where she dug and dug her fork into her must-eats. She also carried back home-made spices from her mother’s pantry. That was before the pandemic. Now, no flying in, no mother’s recipes, no domestic help to lend a hand in the kitchen. And that’s when she took to nostalgia - the aroma of litti-chokha, the famed Bihari dish that was a constant in her home in Bodh Gaya (Bihar), and the mutton that took nearly 3 hours to cook. Pragya is subsisting on them - making litti (baked wheat flour balls filled with roasted gram flour) in the oven and trying her hand at the old mutton recipe.

“Strangely, sattu (roasted gram flour) became easily available in Kuala Lumpur’s Indian stores - pre-pandemic it was a tad difficult to find,” says Agarwal, who spends a chunk of her weekend stacking the refrigerator with childhood eats, often making 30 littis in one batch that she shares with friends and colleagues. 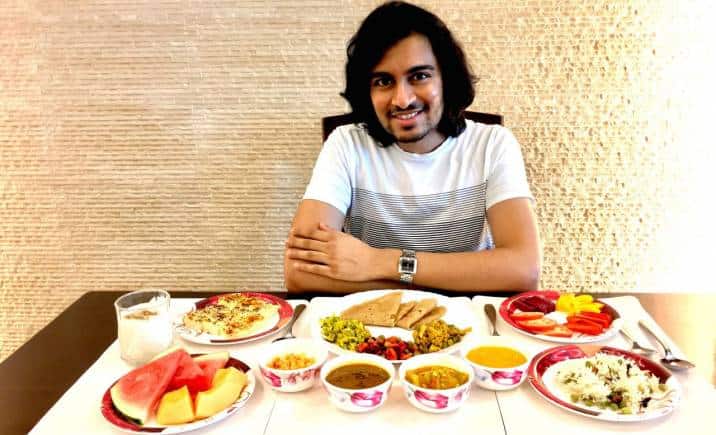 Sohil Bahamania had carried home-cooked, vacuum-sealed rotis and dal to Manila, in the hope that his next trip to Mumbai would come before he ran out of these.

Sohil Bahamania takes nostalgia to another homesick level. Just before the pandemic, when this long-haired, soft-spoken vegetarian was moving to the predominantly meat-eating city of Manila (the Philippines), he brought along kitchen utensils and countless packets of mom's vacuum-packed rotis and dal and gravies which he assumed would last till his next trip to Mumbai or until mom flew to Manila. When the lockdown caged this corporate communications professional in, he tried his hand at cooking, a task he had never undertaken before. Not just any dish, but typical roti, dal, rice, curries that he grew up on, even the "cringe vegetables like bitter gourd and squash".

“I am old-fashioned. I cook everything old style,” he utters like a veteran kitchen trooper. One day he tried his hand at making rotis. He failed. He tried. He failed. Finally, when the dough was rolled right and the paratha was buttered, the smoke alarm screamed. “I learnt to butter properly,” says Bahamania, who now makes 30 rotis every weekend along with three or four ready to eat vegetables and a few bowls of dals. “I stick to my mother’s recipes, sometimes I improvise,” adds Bahamania. He says that he never orders food. Never, he insists. 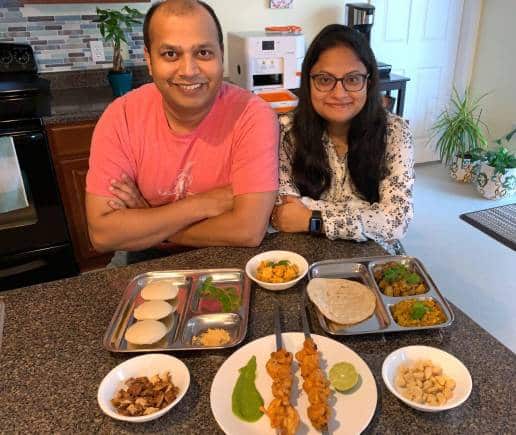 Dr Ratnakar Singh and Surabhi Sonam have been making Bihari dishes, from parathas to poha, at home.

University of Illinois Urbana-Champaign (USA) graduate-student and mom-to-be Surabhi Sonam has a deft pair of helping hands in the kitchen. Her husband: Dr Ratnakar Singh, research scientist. Of the 21 meals in a week, almost all are typical Bihari dishes - from parathas to kebabs to chutneys to poha, their household is always heavy with the whiff of spices. So passionate is Singh about cooking that in his heart he nurses a secret dream of opening a restaurant serving old-fashioned Biharis dishes. Singh painstakingly replicates all that he watched his mother cook - everything to the last detail. When rotis became too tedious to roll, the two bought an automated roti-making machine. So far, it has spewed 4,000 warm rotis in the Surabhi-Ratnakar home. Ask Singh what’s the first thing he’ll eat whenever he is in India next, prompt is his reply: litti with chicken that is sold in Kankarbagh, Patna.

While for everyone else nostalgia is one town, one cuisine, retired bank manager Hyacinth Kumar has to literally traverse the map. Her maternal ancestry beginning in Goa, journeying to Burma (now Myanmar), and finally settling in Patna; her paternal footsteps starting in Portugal, landing in Kolkata and then finally digging heels in Hazaribagh (Jharkhand). Before the lockdown, Kumar had no spare time from crunching official numbers but now her kitchen is a cauldron of Goan, Bihari, Jharkhand food - traditional and a few with a hint of fusion. From the pre-pandemic quick meals, Kumar’s dining table now has Goan fish curry (finding kokum in Hazaribagh is near-impossible) with Goan kulkul, Jharkhand’s dhuska (urad dal batter fried), vegetarian vindaloo and a gourd kofta.

“I share recipes with my friends - one is coaxing me to try the typical Goan bebinca (layered dessert) and chicken xacuti, the other shared her ginger wine recipe,” says Kumar, who is not straying from childhood dishes though she is tweaking them a little to make them healthier.

“I am always thinking food. At breakfast about lunch and at lunch about dinner. Food is my focus,” Ira Jain, Mumbai-based serial entrepreneur and mother of two, confesses. Dining out was a weekend joy that she waited for. “I miss that the most,” says Jain, a Sindhi married to a Punjabi Jain. Jain lists Sindhi sai bhaji as her most loved nostalgia food. To it she adds the Sindhi kadhi (Sunday staple), aloo tuk, and the Punjabi kadhi, rajma-chawal (with tomato-imli), maa ki daal and rawa halwa.

For something sweet, she turns to heirloom recipes: her husband’s 86-year-old maternal grandmother's mango pudding. Her father’s signature mushroom in white sauce dish is another heirloom dish she's been making in the past year.

The pandemic is taking us back in time. Proust was right. A madeleine dipped in tea can bring back remembrances of the things past. And help us manoeuvre a tough present.