UPCOMING EVENT:Are you 45+? Planning for retirement? We have just the right webinar for you - Planning for Retirement with Life Insurance on 27-Jan, 3pm. Register now!
you are here: HomeNewsTrendsFeatures

Our leaders' personalities and experiences have a bearing on the kind of policy decisions they make too; Uppal says that a historiometric approach could help us to predict policy consequences.

Nishant Uppal is the author of 'Narcissus or Machiavelli? Learning Leadership from Indian Prime Ministers'.

You could study their speeches and policies, preserved and discussed in books and newspapers. Or you could take a short cut, like reading Nishant Uppal’s book Narcissus or Machiavelli? Learning Leadership from Indian Prime Ministers (published by Routledge), to find out.

An associate professor, Uppal is on the faculty of organization behaviour in the human resources management group at IIM Lucknow. Excerpts from an interview:

How did you balance academic rigour and political correctness while analysing the personality traits of various Indian Prime Ministers?

The trade-offs were unavoidable but not irresolvable. I used robust and universally acceptable personality traits—narcissism and Machiavellianism­—that have been deployed by international researchers for studying political leaders’ behaviours and associated policy outcomes.

The framework prevents the researcher’s bias from interfering with intended outcomes, and thus protects from any potential controversy. Nonetheless, narcissism and Machiavellianism are generally seen as negative traits; therefore, some of the research outputs in the book—despite being entirely unbiased—can be treated pejoratively. This systematic risk, in any such intellectual and scholarly pursuit, is unescapable.

What made you study this subject?

India has entered its 75th year of Independence. This deserves a lot of appreciation, as its continual and efficacious existence is against several predictions that were made when India received its freedom from colonial powers. While we celebrate our triumph, it is necessary that we occasionally put India through a critical lens. There are various parameters of success; I chose to study the one consistent with my line of research and expertise: personality-policy connect.

Political institutions and government bodies operate through human agency. Scholars of history and political science suggest that political and governmental actors in upper echelons impinge a great deal of themselves—their experiences, preferences, and dispositions—into their decisions and leadership behaviours, often with great consequences. Despite the availability of several such researches on the international landscape, Indian political leaders have scarcely been put through such scrutiny.

Tell us about your research methodology?

Political leaders are physically and politically distant, and few become available for controlled laboratory-based experimental research. Besides, it is too ambitious for social scientists, who like to pose onerous questions, to expect lawmakers to fill lengthy survey forms. Thus, I employed the historiometric analysis that utilizes historiophoty (the representation of history and our thought about it in visual images and filmic discourse) and historiography (the representation of history in verbal images and written discourse) to examine the truth and accuracy presumed to govern the professional (or unprofessional social media governed) practice of psychographic profiling of the subjects in question.

Donald Trump, Barack Obama, Saddam Hussain, Robert Mugabe, and Vladimir Putin have been put through historiometric scrutiny. One study that examined George W. Bush’s personality predicted quite accurately his stimulants and reactions with respect to the US attack on Iraq. The historiometric approach deployed on Indian prime ministers may reveal some important predictions and policy consequences. 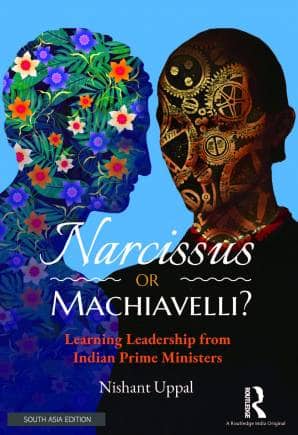 Narcissus was a hunter in Greek mythology who fell in love with his own reflection. What insights can leaders draw from his story?

Narcissus fell in love with his own reflection in a pool, and ultimately perished as a result of his self-preoccupation. Psychologists such as Sigmund Freud identified various manifestations of narcissism, including self-admiration, self-aggrandizement, and a tendency to see others as an extension of one’s self. Modern social scientists added other dispositional dimensions to narcissism such as exploitation, entitlement, superiority, arrogance, self-absorption, self-admiration, and an insatiable urge to be at the centre of attention. In my book, I put prime ministers through this dispositional lens.

Niccolò Machiavelli’s book The Prince is associated with using unscrupulous means to achieve success. What can it offer leaders who prioritize ethics in public life?

Often, Niccolo Machiavelli’s book The Prince is misconstrued as cynical. While for a leader with high Machiavellianism ‘end justifies the means’, it is not universally villainous. Comparisons have been drawn between Kautilya (Chanakya) and Machiavelli, which explains that both were political and public policy thinkers and promoted result-oriented means to achieve goals.

In The Prince and The Discourses, Machiavelli advocated extreme behaviours such as manipulation, exploitation, and deceitfulness with an analytical attitude without a sense of shame or guilt for acquiring and maintaining power in socially and politically competitive situations. He advised leaders to take on many carefully crafted personas to create a leader-like image by exhibiting greatness, boldness, gravity, and strength in their actions. The Prince suggests that men are moved by two principal things—love and fear.

Wouldn’t it be simplistic to conclude that India hasn’t had any women as Prime Ministers apart from Indira Gandhi because women refuse to be narcissistic or Machiavellian. What other explanations are possible?

While empirical evidences from the science of psycho-pathology reveal the differential presence of narcissism and Machiavellianism in women and men, political leadership can rarely be understood if gender is seen through a binary static lens. Generally, for women in lower gender egalitarian societies, exhibiting more charismatic and authoritarian leadership behaviours may provide a way for them to appear more androgynous and thus acceptable. Androgyny may offer women a way out of the double bind they are put in when they are associated with leadership ability but also the expressive qualities associated with their prescribed gender role; therefore, the association with goddess Durga.

Indira evolved from being ‘gungi gudiya’ to ‘Durga’. Given the male dominant Parliament and political and social leadership spectrum in her time where female leaders frequently bestowed their positions to their male counterparts, her escalation and sustenance would not have been easy. From early childhood, she was an ignorable entity. However, she took bold decisions which were previously unseen even by her male counterparts. While narcissism and Machiavellianism are two essential ingredients of any political leadership, which she evidently displayed, androgyny was an equal contributor to her premiership.
Chintan Girish Modi is an independent journalist, writer, educator and researcher who tweets @chintan_connect
Tags: #books #IIM Lucknow #Indian prime ministers #interview #Leadership #Narcissus or Machiavelli? Learning Leadership from Indian Prime Ministers #Nishant Uppal
first published: Sep 10, 2021 12:01 pm