Is there such a thing as an Indian way of doing business?

Leadership to Last: How Great Leaders Leave Legacies Behind by Harvard Business School (HBS) professors Geoffrey Jones and Tarun Khanna, emerged from HBS' Creating Emerging Markets (CEM) project to understand leadership in Africa, Asia, Latin America and the Middle East. Under the project, which has been running since 2007-08, researchers have interviewed over 150 business leaders in these geographies to answer some fundamental questions:

"How do entrepreneurs in emerging markets build world-class brands?

"Why and how do entrepreneurs in emerging markets think about 'going global'? Are the motivating factors for them different than for business leaders in more developed markets?

"How does corruption manifest itself in emerging markets? What are some ways that business leaders have dealt with this phenomenon?

"How do business leaders in emerging markets view corporate social responsibility? Are there general trends, or regional variances?"

Jones started this project 14 years ago, and he and Khanna are currently faculty co-chairs on it. Their book, Leadership to Last, draws on interviews that the CEM team conducted with business leaders like Ratan Tata, Adi Godrej, Kiran Mazumdar-Shaw, Rahul Bajaj, Patrick Chalhoub, and Shinta Kamdani in Asia.

Over a Zoom call, Jones and Khanna explained what triggered the project, what it tells us about the Indian way of doing business and where to see the CEM interviews for free. Excerpts:

This book came out of a larger project where you interviewed people in different geographies about what it takes to build a lasting business. I wanted to understand from you, what were some of your takeaways from talking with these successful businesspeople, and is there such a thing as an Indian way of doing business?

Khanna: I think the answer is yes and no. Let me address the no part first.

No, in the sense that there are some commonalities across many, shall we say, middle-income, lower-middle-income developing countries, which is where India is in the spectrum of development - we are no longer a low income country. When you look at countries like Indonesia, Kenya, Brazil, Mexico...there are lots of structural similarities. For instance, the capital markets are in a stage of development where parts of them are functioning quite robustly to allocate capital towards sensible users and parts are really quite dysfunctional. You look at meddling in credible information, whether it's by political actors or others, there's a commonality there. So when you run down the list of what we refer to as sort of institutional supports for business, there are lots of commonalities across them.

Now, let me come to the Yes part, why there is nonetheless still some uniqueness to building a business here - and I would give the same answer to an Indonesian journalist, or a Kenyan journalist, if he or she were to say, is there a Indonesian or Kenyan way of doing business.

The Yes part, I think, comes from the idiosyncratic features of India. So, for instance, we have a particular kind of social structure that is not replicated elsewhere. And so, of course, our business has to be responsive to both that social structure directly and also to the government and the citizens attempts over the years to address issues that (arise in) the social structure. Look at the reservations policy in India; obviously, the way in which Indian entrepreneurs respond to things like that is somewhat unique to India, because the particular way in which those social schisms have manifested over the years are unique to our own history and evolution.

Then there are some even more unique things about India that I don't think you see, to quite the same extent, almost anywhere. The linguistic variety, for instance, is so extreme. I think there is a construct that social scientists sometimes use, which is a bit of a mouthful, ethno-linguistic diversity. And I think India is right up there as one of the highest scorers on that. In other words, we just have a lot of people in the country living in very different ways socially that mirror their own their own traditions and so on. And so an entrepreneur building a organisation across India would have to be sensitive to these unique things.

We found an extraordinary sense of responsibility to society among the people we talked to.
- Jones

So that's kind of my yes, no answer.

Jones: Is there an Indian way of doing business? As an outsider, of course, one is most struck by the diversity of India... it's really quite striking. We found an extraordinary sense of responsibility to society among the people we talked to. They really were aware of India's social problems and really wished to do some good about them. And interestingly, we had people from quite different background - Parsis, Jains, Hindus, all different ways of thinking about the world. But this common feature was quite striking. We did find that in other geographies, I would say, less explicitly so. Our interviewees in India were very explicit about their concerns, and their wish to do something. I've written in another place about spiritual philanthropy, and the Indian interviews were a prime example of this kind of spiritual philanthropy offering; people were explicit about their beliefs as well in some cases, and how that motivated them. And that's complete contrast, say, to Latin America, where people simply would not talk about that kind of thing.

How did the project start? And how did you distil that into the book?

Jones: The project started, actually, in 2008. If we were to trace it back to the very, very early beginning, it was when a Chilean entrepreneur wandered into my office. He'd heard me talking about the importance of history, and he said I wish businesspeople in Chile and policymakers would actually learn from history - then they would stop repeating the mistakes of the past. And that got me thinking, why don't they learn from history? And I think one answer was, there was no history to learn from. Because there's very little information about business. So that got me thinking about how we could fill that void and provide a record of experiences that people can learn from, to get a better future.

It's not about being a billionaire. It's about creating foundational change through entrepreneurship.
- Khanna

It began very modestly. I think we have 155 interviews in all as of now, all publicly available, because one of the key things we sought to do is this shouldn't become some sort of, like, pot of gold held by Harvard Business School. Interviews should be available to anyone, anywhere in the world who has access to the internet. Which meant that the people who shared their time with us could also feel good about it, that they were actually giving back to their own countries, and not just, you know, giving the Harvard Business School some wonderful material to learn.

Khanna: When I was a student at the business school 30-odd years ago, you only read about New York and London. My family had business interests in Punjab and Delhi and Bangalore. And I remember thinking, "Oh, none of this stuff is going to work in my dad's factory. Some of these ideas are great, but actually won't work when there's a hartal (strike) outside."

Geoff got me thinking, wouldn't it be nice to have iconic stories of people who actually walk the talk... It's not about being a billionaire. It's about creating foundational change through entrepreneurship in societies. And we wanted to bring those stories to our students and to people anywhere in the world.

Were there any themes or categories that were tricky to cover during the project and in the writing of the book?

Khanna: Corruption was the trickiest one, as you can imagine. Because you can imagine if somebody is really very corrupt, they're not going to come and say we really corrupt. These are the ways in which we were corrupt.

Did any of the findings surprise you? Anything that really stood out?

Jones: I would be repeating myself I think, but the strong sense of responsibility that these people have, their concern for society. It's not perhaps the image you have often of big business. These days, I'm writing another book on responsibility of business. And I have to say that India just 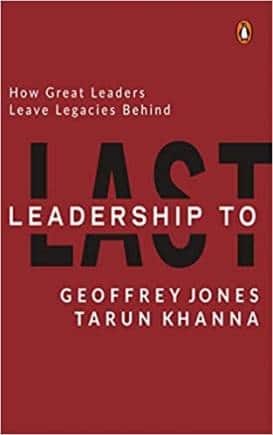 sort of stood right up there, as a prime example, globally, of responsible businesses... Godrej, or Tata, although Josh, and some others... they've been responsible generation after generation. That's hard to come by.

Khanna: If you're an entrepreneur and you see that something is missing around you, your three choices are

1. You don't do it (start-up/run the business) because it's too hard, which would be the default choice, or

2. You do it and try to figure out how to remedy the situation around you. So that you can get on with your business. And that's costly. It's costlier than if somebody in the government had done it for you. Or

3. You leave for somewhere else.

The ones (business leaders) that are in the book are those who took the second path; they said we're going to build this fabric. The example that I really like in the book is Yusuf Hamied (Cipla).

Where can people read all the CME interviews? You mentioned they're free?

Jones: On the website of the Creating Emerging Markets. The team has edited these to roughly 5 minutes each.