Disaster management expert Anshu Sharma: 'For us the rooftop is a hidden labelled data set'

An AI-powered model called Sunny Lives breaks down disaster warnings from a general area to the individual home level. So far, the program has been piloted in 20 locations in India.

Anshu Sharma and his two classmates were final-year undergraduate students at the School of Planning and Architecture, New Delhi, in the early '90s when they decided to form a voluntary organisation to promote a sustainable society. Three decades later, the Delhi-based Seeds, the organisation they built, is an internationally known disaster management leader winning awards and rewriting flawed models to ensure community participation in preventing deaths and losses from earthquakes, floods, heatwave and pollution.

Ahead of the International Day for Disaster Reduction on October 13, Sharma spoke about the arrival of AI in disaster management and how technology and communities can create a better-equipped proverbial last mile. Excerpts from an interview:

What is Sunny Lives?

Sunny Lives is an artificial intelligence model that tells us the impact of a disaster or incoming hazard at the individual house level. Every year we go back and rebuild houses in communities that are hit again and again. If you have a three-day warning that a cyclone is coming, today you evacuate a million people. You don't really need to evacuate all the million people. You can be clearly selective about whom to evacuate if you know who are going to be the worst-hit, how are they going to be affected. The technology breaks down the hazard into what impact it will have. We move the hazard warning to an impact warning. What is this particular cyclone going to do to your house? The answer to this question can't be learnt without the help of technology. Apart from warnings, the model can also help homeowners and governments take steps to reduce risk in the long run, through targeted strengthening of buildings and infrastructure.

Was there a particular disaster that led to the creation of this new model?

When Fani, a rare summer cyclone, hit Odisha in 2019, it became very hard for people to survive. Power lines were down and water was not available because saline water had come in and merged with fresh water resources. I was part of a team that was providing relief in a fishing community slum near Puri. I had just read the book, Blink: The Power of Thinking Without Thinking by Malcolm Gladwell, about the decisions we make instantly. I was standing there and thought, it is so simple, in a blink we can say which roofs will blow away in a cyclone and which houses will collapse in a heavy rain. That instantly felt like something and I thought how can we find a way of doing this really fast. That was the origin of Sunny Lives.

How does Artificial Intelligence work in identifying individual homes for warning in the event of a disaster?

If you open your phone and turn on the satellite imagery on Google Maps, basically you can see the rooftop of every house in the country. And the rooftop tells you a lot. For us the rooftop is a hidden labelled data set. Every house is like a QR code. You can read into it, see its size, material, shape and construction quality and from that you can infer a lot. You can infer that if 200 of these tiny rooftops are stacked together, it is a slum cluster. I can do it manually with the satellite imagery from a phone for 200 houses in the next one hour. But we need to run it for 200,000 houses in a day when there is a warning. That is where the code sets in. Our colleagues from Microsoft whom we partnered with, our academic partners and our own staff came together and started coding this model.

What are the disasters that could be addressed by Sunny Lives?

We have so far worked with storms, flooding, heat and heat waves. We are now working on earthquake modelling. But in theory it can be applied to any disaster. We can talk about air pollution, road accidents and epidemics, the essence will remain that it is breaking things down to a much more micro-level. In recent years, the phenomenon of a part of the city seeing torrential rains and another part not receiving (any rain) is common now. It is a standard conversation among residents during the monsoon, which is telling us that you can't deal with a city or community as whole. There are huge variations even within a city. Fundamentally that is what we are doing, we are breaking it down so that you will know what is coming your way and you will know as an individual how you are going to be impacted and what you should do about it, the actionable insight.

How will the new technology help the people in the last mile?

In the last two decades, we have seen a lot of advances in the way satellites and supercomputers work to articulate a warning. But the problem has been either the people on the frontline don't get the warning or don't understand it. You may say there is going to be 150mm of rainfall or 200 cusec of water will be released from a dam upstream. It doesn't mean anything to ordinary people. But technology converts all of these to tell us that tomorrow morning at 7 o'clock, there is going to be seven feet of water in your house. Because your house is made of mud wall and thatched roof, there will be a significant impact. You don't have an upper floor to move, so you need to get out. Or it may tell you that you have a three-storey house and the ground floor is going to be under water. That is the calibration that technology does. What we do is we get a hazard warning, we run the model, we turn it into an impact warning at the household or cluster scale and our volunteers go door-to-door, and they inform residents with a map. We are not creating any new warning, we just say that for you, you and you, this is going to come true. So you need to act. For the people, the respect in the warnings go up, because now the precision is there. 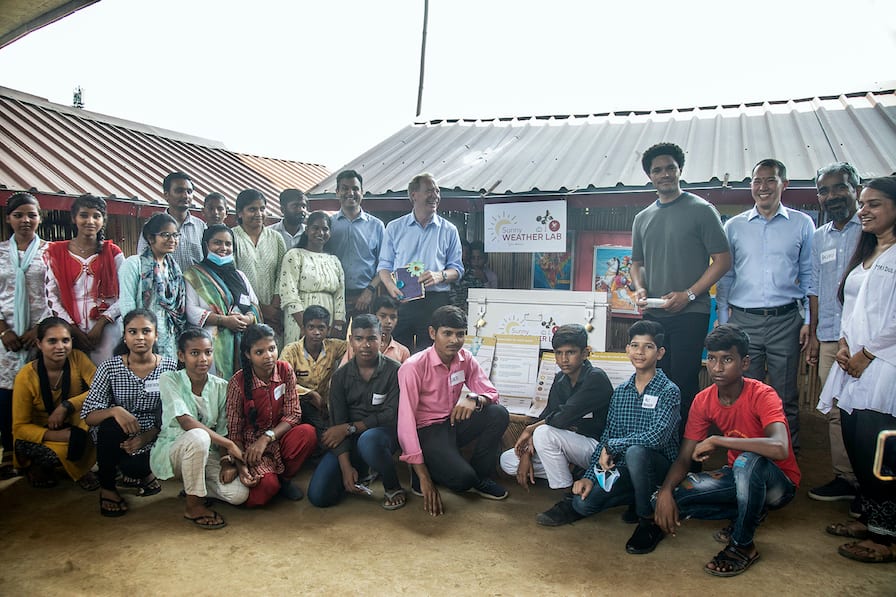 A Sunny Lives pilot was run at the Vanphool school in East Delhi this month. (Photo courtesy Seeds)

What will be the role of the communities in preventing disasters in the future?

Our belief is that for a future vision, the core strength will lie in people owning up knowledge and technology. We work with local communities, particularly local schools, where knowledge is being generated and absorbed. We run climate workshops and Sunny Weather Labs in schools. Sunny Weather Lab is a weather station managed by the school community, both students and teachers. They take readings of the daily weather. It does a number of things. One it will help the children, parents and community understand the way weather is changing and how it impacts them and creates awareness around the climate crisis. Second, over time it can generate more data. Lastly, the growth of this as a people' science.

What are the ways in which technology like AI is going to benefit the poorest who are the most vulnerable to disasters?

There is no solution that can be purely a technical solution that can deliver goods to the people. It has to be a combination of the technology and the people in the last mile. Sunny Lives combines the feet on the street, the community volunteers, and the technology together. The question we are often asked is, you have done it in the pilot, but what about a global rollout? We are talking to the Asian Disaster Reduction and Response Network comprising 50 national humanitarian organisations in Asia, and the Global Network for Disaster Reduction spread across South America, Africa and Asia where the most vulnerable communities are located. We believe the answers will be found when we take the technology and marry it with the networks that are operating at that level.

When will the new AI model be ready for use at the ground level?

In May this year, we presented the model at the 7th session of the United Nations Global Platform for Disaster Risk Reduction in Bali, Indonesia. It was received very well. My colleagues showed it to delegates at the Asia-Pacific Ministerial Conference on Disaster Reduction in Brisbane, Australia, held during September 19-22. We have run pilot tests in about 20 locations across the country, in Odisha, Maharashtra, Kerala, Tamil Nadu, Delhi and Sikkim, in the last three years. From here on we are engaging with local authorities and tech accelerators to mainstream this approach.
Faizal Khan is an independent journalist who writes on art.
Tags: #Features
first published: Sep 24, 2022 05:03 pm