Artist Osheen Siva's work is dipped in science fiction and what is increasingly being known as Tamil Futurism. (Image via eShe)

For 28-year-old Goa-based illustrator, muralist, graphic designer and multidisciplinary artist Osheen Siva, her Tamil heritage and Dalit identity show up in various ways in her artwork, which, she says, is “predominantly a process of self-reflection, self-discovery and a medium to voice and explore her place in the world”.

In her first solo show Inflorescence presented at Method Kalaghoda in Mumbai late last year, she wove a “future of solidarity and sisterhood, of resilience, and of manifestation of ancestral dreams” dipped in science fiction and what is increasingly being known as Tamil Futurism.

Growing up in a mixed environment between Taiwan, China, Hong Kong and India, Osheen says that in retrospect, having been the “odd one out” and not having a particular place to fit in helped quite a lot in trying to find her identity, roots and the foundation of her practice today. Some of Osheen’s inspirations now include the representation of the marginalised in the Indian context, mythological reinterpretation, histories of women warriors, Afro-futurism, science fiction and subconscious worlds.

She also strikes a balance between the traditional and digital mediums that she often combines in her art. The different mediums that she likes to explore lend to and lean on each other in various ways. For instance, her digital illustration practice came in handy when she started making murals in terms of composition, balance and proportions.

The young artist is known for her bold, vibrant portraits, for instance, a wall mural in Chennai’s Kannagi Nagar that pays tribute to the city’s fisherwomen, an artwork for Converse India focusing on self-love and a virtual mural of a powerful, goddess-like figure for Gucci’s Off the Grid collection. She is also drawn to themes of femininity, sexuality and gender and its intersection with technology and society in junction with nature, cosmology, dreams and nightmares. “The overarching themes I’m attracted to are representing characters that are strong, feminist and inclusive,” says Osheen, who has worked for several major multinational brands from Levi’s to National Geographic and was an Illustration Jury member for the ADC’s 100th Annual Awards in 2021.

Her latest artwork is on the theme of speculative fiction and the future universe of feminine energy and surrealism that she envisions through them. “I’m interested in creating worlds where under-represented communities that I belong to have fully fleshed out narratives, journeys and stories of their own,” she says of the inspiration behind it.

Last year, she designed a poster highlighting Menstrual Hygiene Day, featuring Goddess Kali with her sword depicted as a menstrual cup. One of her other projects is How to Deal, a small zine on how to take care of oneself in stressful and anxious situations by doing simple activities such as sharing with a friend, cozying up to a pet, unplugging from technology and listening to one’s favourite music. Her other notable works include a mural in Tamil for the St+art India Festival Chennai 2020 – a homage to the dual role women play in the sustenance of an economy – both as providers and protectors of households and society.

Another mural she made during the Museum Next Door residency at Jeju Island, South Korea, was inspired solely by Korean elements such as Buchaechum, the traditional fan dance performed by female dancers, Eoyeo meori hair and rhino beetles found in Jeju.

As for many artists, the pandemic wasn’t easy for Osheen, but having a show on her hands was just the kick she needed to hunker down and work hard. With the art world once again opening up, she plans to work on more mural projects, explore different mediums, and “possibly collaborate with interesting creatives”. 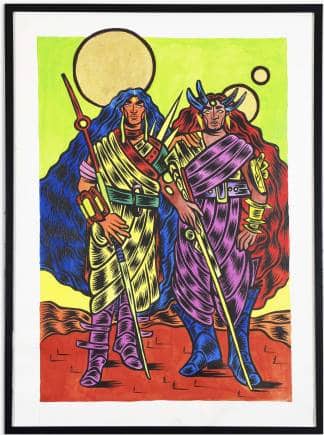