The core question that ought be concerning New Delhi is not whether the PLA has taken a few kilometres of territory or a mountaintop here or there. The real need is to develop sharp clarity on what New Delhi’s real red lines are, and how it will respond should they be breached.

In the year of the Water Hog, Chhnmo-phag-lo, the wrath of god rose in the land of Sog-yul, and broke on the people of Ladakh. The armies of the great Genghis Khan, chronicles record, swept aside the forces of Ladakh’s ruler and laid waste to the land. From 1685 CE to 1687 CE, the fighting raged on. The desperate Ladakhis appealed to the Mughal governor of Kashmir for help. Nawab Fateh Khan, sensing peril to his own imperial domains, led an army of six lakhs — in fact 6,000, regrettably prosaic modern historians estimate— and chased back the invaders.

The Mughals soon left, though, and the Sog-po, the people of Sog-yul, returned in 1689CE. This time, the Ladakhis turned to the wise monk Brug-pa-pham-langpo, who mediated a peace agreement. In return for the district of Rudok, the Sog-po agreed to withdraw—and a great black rock in the village of Demchok came to mark the permanent frontier.

Now, troops of the Indian Army and People’s Liberation Army are staring out at each other on either side of that very rock, all the way northwards along the Line of Actual Control to Pangong, the Galwan valley, and the bleak Depsang plains.

Even as Indian television exults at the incredible bravery of soldiers who have occupied tactically-significant heights south of Pangong Lake, any genuine answer to this question must rest on a dispassionate appraisal of the strategic situation, not emotion. The Indian Army has a line of sight to the PLA garrison at Spanggur and returning the favour bestowed by it in April, north of Pangong. These gains are only of significance if China proves willing to trade-in its gains to avert further conflict.

Likely, China instead wishes to use its key advantage, a technologically advanced military which began a radical modernisation process in the 1980s, to bleed India over a protracted period of time. Forcing India to expend massive resources, will compel New Delhi over time to accept terms it would not do today—and serve as a lesson to other would-be challengers. 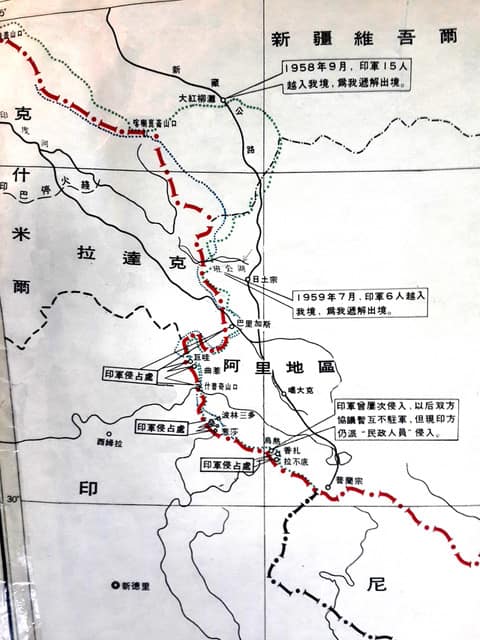 In essence, a few minutes with maps (above) make clear the PLA now controls much of what China calls its 1959 claim-line, the territories it asserted prior to the 1962 war—and briefly occupied, before withdrawing to easily sustainable positions of the Tibetan plateau. New Delhi cannot reverse that situation without either risking war—or a persuasive diplomatic deal.

For India, the situation in fact marks the worst all worlds. Even though it has been unable to reverse China’s assertion of the 1959 line, it is now committed to holding back the PLA through a brutal, logistically-draining and resource-sapping occupation of positions at extreme altitude that can stretch for years, if not decades.

Although no official figures are available, the cost of sustaining 30,000-40,000 additional troops through the winter — imported extreme-weather equipment, road maintenance, the wear of equipment like tanks and artillery, and additional flying hours for fixed-wing and heavy-lift aircraft — could by informal estimates stretch upwards of Rs 8,000 crore per month. Indeed Indian military presence on the Siachen Glacier alone is estimated to cost upwards of Rs 5 crore a day, not counting logistical infrastructure investments.

This expense, given the gap between the size of the two economies, inexorably asymmetric. This year, China’s declared military budget is $117 billion, up from $106.4 billion in 2012-2013 and $91.5 billion in 2011-12. For the past decade, China’s military budget has expanded at about 12 percent, ahead of its economic growth. The scholar Abhijnan Rej has documented in granular detail the growing gap between India’s military means and those of China.

Expense is, of course, entirely justifiable in the face of compelling national interests — but only if there are clear strategic ends, and it is far from clear if that is the case. The strategic community in India errs in mirroring its own méntalité in assessments of the thinking of its adversary. The PLA is not — and never has been — a prisoner of the ‘occupy-and-hold-every-inch’ fixation Indian politics has imposed on military thinking. Land is not the PLA’s end; it is merely a means.

Fearsome as China’s military build-up might be, moreover, it isn’t clear India need to be terrified into a reflexive matching of force. Eight of China's 18 Group Armies — the equivalent, roughly, of an Indian corps — face out on its south-eastern seaboard. Throughout China’s military modernisation drive, the United States Defence Department noted in 2012, “Taiwan contingency planning has dominated the agenda”.

The asymmetry of resources, though, does make it imperative that India’s strategic community thinks smart — rather than be drawn into the trap of fighting the kind of war the PLA has chosen to impose.

In large parts made up of only sons — the products of the one-child family policy — and sensitive to the pressures that a large-scale loss of life would entail in a relatively affluent society where ageing parents are dependent on their single child. Thus, it will most likely avoid limited war, or even skirmishing.

However, as the scholar PS Suryanarayana has observed,  Beijing will only enter into a border agreement when it recognises “that the cost of not settling the issue outweighs the cost of a continuation of stalemate”—which, put another way, is no time soon.

From that other Sisyphean enterprise — the Line of Control with Pakistan — there are some useful lessons to be learned. To any thinking commander in either India or Pakistan, it has long been evident that the Line of Control model — mountain-to-mountain saturation with troops, all year round — is militarily useless.

Technological means available today render the so-called benefits of such occupation — lines of sight to enemy positions; preventing infiltration; securing territory — largely irrelevant.  The intense Indian Army presence LoC, moreover, did not prevent large-scale infiltration into Kashmir from 1988 to 2003; nor have years of skirmishes shown either side is deterred by the actions of the other.

Though the stated reasons for New Delhi’s eleventh-hour decision to walk away had to do with public backlash against appearing to cede territory, there was one unstated factor: Indian military commanders had no confidence the leadership would let them respond, should Islamabad take the territory later.

New Delhi’s playbook changed in 2002, when Prime Minister Atal Behari Vajpayee ordered Indian combat jets to bomb a peak LoC Pakistani troops had occupied. There has been no attempted grab since.

Even if such tactics are infeasible against China, creative thinking is needed to ensure real costs accrue to violating India’s red lines. Generals need to be thinking of new ways of deterring China that do not commit the Indian Army to expensive and pointless ground-holding operations. Politicians and diplomats need to consider how time might be bought to develop the capabilities India today lacks.

The core question that ought be concerning New Delhi is not whether the PLA has taken a few kilometres of territory or a mountaintop here or there: Though these are excellent to pass the time on Twitter on TV debates, they are of no strategic consequence. Instead, the real need is to develop sharp clarity on what New Delhi’s real red lines are, and how it will respond should they be breached.

“Bear in mind”, the colonial civil servants Alexander Cunningham and PA Vans Agnew were ordered, as they began an effort to negotiate the border between British India and Tibet in 1846-1847, “that, it is not a strip more or less of barren or even productive territory that we want, but a clear and well defined boundary in a quarter likely to come little under observation”.

That was sage advice, then, and remains so now. New Delhi use of its sword needs to be tempered by the patience and clarity of vision of the monk.
Praveen Swami
Tags: #India-china border tensions #weekend reads
first published: Sep 12, 2020 07:22 am