National Film Award winner Nachiket Barve: ‘I create costumes that convey a story about the characters’

Nachiket Barve says for 'Tanhaji', they used unstitched pagdis for all actors, from Ajay Devgn to the foot soldiers, and Kajol's saris were professionally draped by a veteran sari draper before each shoot.

Period dramas require a tremendous amount of hard work and research to create a strong cultural connect with the audience, while retaining the authenticity and also maintaining the cinematic beauty and grandeur of a film. Naturally, this applies to the costume design for these film and series too.

In the last two years, Barve has done costumes for three films and he’s won accolades for all. In 2016, he got the Maharashtra State Award for the musical Katyar Kaljat Ghusali (Shankar Mahadevan’s acting debut), and then the Zee Chitra Gaurav Puraskar for Best Costume Design for Ani… Dr. Kashinath Ghanekar.

Barve, 41, says what makes a designer’s work special in any film is if s/he creates costumes that convey a story about the characters, and for a period film, the authenticity of the storytelling is the foundation. “I spent two whole years just doing the research for this film (Tanhaji). I went to the National Crafts Museum and Hastkala Academy, New Delhi, the Chhatrapati Shivaji Maharaj Vastu Sangrahalaya in Mumbai, Raja Dinkar Kelkar Museum, Pune, Salar Jung Museum, Hyderabad, and even the Victoria and Albert Museum in London! It was tough because Shivaji was in an era where there was no photography. So in terms of research, there were only paintings, miniatures, depictions and descriptions,” he explains. From 'Tanhaji: The Unsung Warrior'

In order to stay true to a story about 17th-century Maratha general Tanhaji Malursare, Barve had to ensure that everything from the pagdi to the clothes, jewellery, footwear and war-accessories was perfectly in sync.

He says, “We tracked down (the families and students of) artisans who used to produce jewellery 400 years ago for Shivaji Maharaj’s family and we got them to fabricate jewellery using gold from the old moulds they had. Even the armour in those days was special, and was made using hand tools.”
To maintain authenticity, Barve used unstitched pagdis for all, right from the senior actors like Ajay Devgn to the foot soldiers. The saris for Kajol, were professionally draped by a veteran sari draper. “Before every shot, all the senior actors waited patiently while we hand-draped everything to make it look perfect. Ajay Devgn and other actors had to wear around 17 -20 different elements and layers to complete the look!” 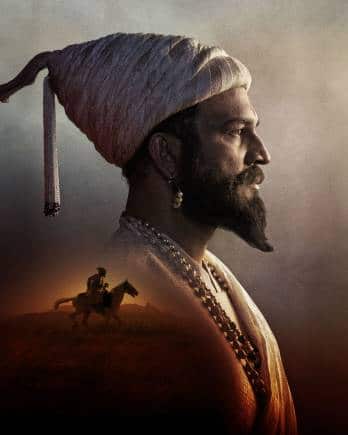 Another challenge as a costume designer is to turn film stars into period characters. A film critic explains, “These actors have been known for decades for their work and to transform them into characters in the film convincingly, just with their clothes, was something. That is what costume does -  it pulls you into that era."

The costumes in Tanhaji: The Unsung Warrior fit seamlessly into the narrative. The nauvari sari and nathni were appropriate for the wife of a Maratha sardar, as was the costume for Ajay Devgn, a mavala, who would spend hours each day on horseback. And the darker colours of the costumes for Udaybhan Singh Rathod (Saif Ali Khan), reinforced his standing as a powerful antagonist in the film.

Barve says: “Saif was so enthusiastic, he showed me the archives of his Pataudi ancestors. He asked if I wanted to use any of those artefacts or jewellery for the character, and eventually, he wore a ring of his own in the film and brought in an emotional touch.”
Debarati S. Sen is a Mumbai-based independent journalist and consultant content creator. Instagram: @DebaratiSSen
Tags: #67th National Film Awards #Costume Design #fashion #Nachiket Barve #National Film Awards
first published: Jul 31, 2022 03:59 pm