Among shows based on fictional retellings of the lives of celebrities, 'Masaba Masaba' is the first of its kind in India. (Image: Instagram/MasabaGupta)

At 33, Masaba Gupta runs a tight, hefty ship. Her fashion label, House of Masaba, sells through eight stores across India. She has had commercially lucrative collaborations with brands such as Nykaa (her velvet matte lipsticks in this collection defy every cliché about matte fatigue in the beauty industry), Samsung and Game of Thrones. The second season of her eponymous Netflix show with her mother, actor Neena Gupta, started streaming this week. While Flipkart co-founder Binny Bansal, Patni Group’s Apoorva Patni and Purple Style Lab’s Abhishek Agarwal backed her in 2019, Aditya Birla Fashion and Retail Ltd (ABFRL) announced a strategic partnership with the designer earlier this year, in which ABFRL would buy 51 percent of House of Masaba Lifestyle in a bid to “build a gen-next focused fashion and lifestyle business under the Masaba brand”. Masaba’s net worth is reportedly estimated at Rs 65 crore.

In a world slowly embracing diversity in content, workforce and sexuality, Masaba is perpetually ahead of the curve. As she proclaims in the new season of Masaba Masaba, it’s time for world domination—it’s time to be king. 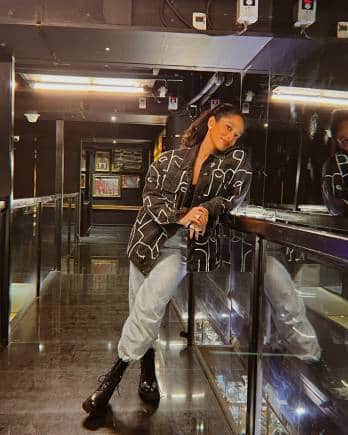 Among shows based on fictional retellings of the lives of celebrities, Masaba Masaba is the first of its kind in India. Masaba and her mother are themselves, and although the show is presented as 70 percent fiction and 30 percent real life, it’s obvious every breakthrough or plot twist is inspired by real events and emotional tides the mother-daughter duo experiences—often in parallel universes but with intersecting consequences. They are each other’s strengths and mirrors; the resulting conflicts fuel some of the show’s drama. The first season was about Masaba’s “hot mess”—a millennial term that’s defined in the urban dictionary as “a person who is spectacularly unsuccessful or disordered, especially one that is a source of peculiar fascination.” She channeled the hot mess in her designs with a serious pre-occupation with the colour rani pink. She navigated the pitfalls of a divorce and made strides in chiselling her aesthetic that also made economic sense. Both mother and daughter were revelations. Neena Gupta’s comeback, that fructified after she tweeted looking for work, was the pivot around which her life was fictionalised in the first season.

The second season is primarily about Masaba’s inner transformation—it is really a romcom, with actor Neil Bhoopalam playing Dhairya, Masaba’s long-time investor and the kind of rock-solid, subdued-sexy gent Masaba is secretly looking for. Trials of her love life coincide with her attempted experiments with and being disillusioned by the shaadi template of Indian fashion—when everything fails, cut for the bride with the fat check. Neena Gupta continues to shatter tastes and conventions decided by Bollywood for 60-plus actresses—what she is supremely good at, besides acting. By the end of the second season, there’s a hint that Season 3 might take her to the Caribbean, to her dad, the West Indies cricket legend Vivian Richards.

Masaba Masaba comes at a time, when a character like Masaba ticks all the right boxes for thriving. If it were Hollywood, her mixed-lineage, progressive, and tenacious-yet-vulnerable persona would have been feted. After years of struggling with weight issues, Masaba is also now at her best physically. She has a kind of singularity that’s uncommon in Bollywood. Although she is a Bollywood insider, a childhood friend of Sonam Kapoor and Alia Bhatt, she is also distinctly its outsider. Her creative juice seems to swirl atop this mongrel-like identity on the wedge of massy Bollywood and eclectic global influences.

Masaba is known for bright colours, pop-kitsch and unusual juxtapositions—partly inspired by her mixed lineage. Gupta has said, once also to me when I interviewed her in 2019, that her Caribbean genes, broad frame and dark skin always stood out in India, and it wasn’t until her late 20s that she could whole-heartedly embrace her physical attributes. Sometimes, what goes on in Bollywood goes on in the rest of India: If you have dark skin, don’t venture wearing bright colours. Masaba’s family had other standards.

Her trips to visit her father in the Caribbean have always been educational in colour schemes. Pale colours are unacceptable there. That’s also where her obsession with rani pink came from.

Masaba plays tennis for fitness and leisure. It is pretty clear in Season 2 that her acting ambitions are serious—she was recently seen in the Amazon Prime Video anthology Modern Love Mumbai in a lead role. It’s still a less dramatic shift compared to her beginnings in the fashion industry. She took over as creative director at Satya Paul in 2012, when she was 21—she hasn’t looked back since. Her Instagram blossoming is another story on brand-building. She has been a model for her own creations, and she has been public about her pain at not having the perfect skin and the perfect body. In 2017, she bared her woes with body image with a post with two photos from her teenage years, about acne scars and excess weight. “Collect your scars and build them into something beautiful,” she wrote, ending the post.

Like mother, like daughter, reviewers of the show have observed. What sets each of them apart is the more interesting story. Masaba has the gift of embodying many identities. In 2023 and beyond, that’s a story of salad-bowl cosmopolitanism that would sell scripts at the best Hollywood studios.
Sanjukta Sharma is a freelance writer and journalist based in Mumbai.
Tags: #House of Masaba #Masaba Gupta #Masaba Masaba #Neena Gupta
first published: Jul 31, 2022 07:07 pm