I already knew the Interceptor 650 was a good bike, at least in the way it looks and on paper. So I set myself off to prove that it isn’t what it was all churned out to be.

Now, I have beaten on Royal Enfield for a while now. Yes, I do have a biased opinion towards it, but for me at least, it isn’t unfounded. Their serious lack of upgrades in any of their bikes almost always put me off. And if that wasn’t enough, the thump that everyone so dearly loved, was always changed to make more noise than necessary with aftermarket silencers. Loud pipes save lives? Please.

But Royal Enfield brought us the Himalayan, their first real change from the overly sentimental ‘Bull’t’ that ran like a tractor. I still don’t like the old bikes, but the Himalayan, given that it had its own share of problems back when it first launched, has done pretty well for itself. And the company itself too has made an effort to resolve those. Then came the 650 twins, the Interceptor and the Continental GT. Since the two bikes are virtually identical I decided to give the Interceptor a try.

But let’s start with the review this way. I already knew the Interceptor 650 was a good bike, at least in the way it looks and on paper. So I set myself off to prove that it isn’t what it was all churned out to be. So, I first looked at it, then I stared at it, then I rode it and then I put it through its paces. 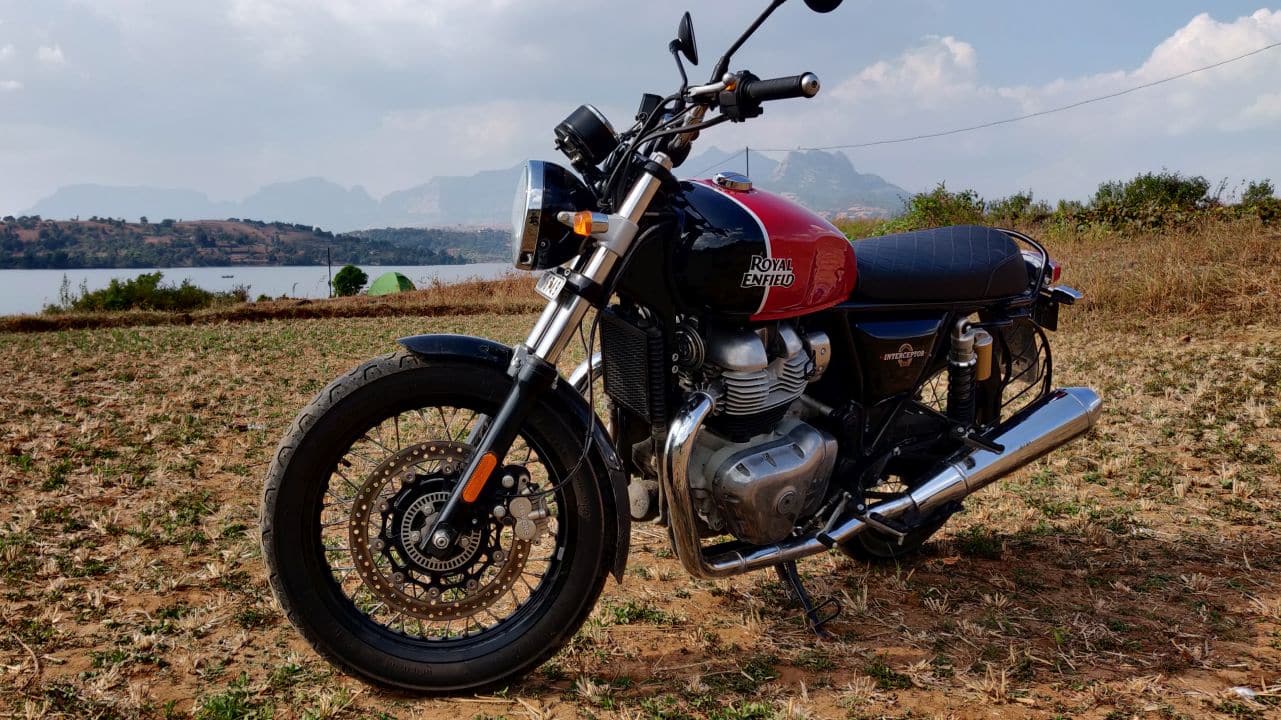 I looked at it I stared at it

Now, I leaned in closer, looking for something that could take away from that glory I found from afar, slight chinks in the armor, if you will. And after a hard look, I decided I did not like the saree guard. The build quality on the twins has been taken up to such a brilliant level. The lines cross smoothly from the tank to the seat, from the exhaust head to the cans in the back, from the height that you sit at to where the bumps happen. The plastic bits that control most of the bike’s electronics have a nice tactile feel to it. Even the welded joints in the chassis weren’t displeasing to look at.

This isn’t something I would have associated with Royal Enfield. Yes, they said that their bikes could be fixed anywhere and by anyone, but that was true for most of the bikes back in the old day when everything was mechanical. Why was that required of us now? Aren’t bikes supposed to be stronger now? The Interceptor on the other hand, from wherever I looked, seemed to be able to hold its own.

And I was disappointed. I thought maybe, just maybe, the Interceptor doesn’t ride well. But, alas. It rides just as you want it to. Putter around in the low gears if you want to or rev up to race that hooligan on the street, ask and you shall receive. The 648cc oil and air cooled engine has a way with words. It revs silently when you’re cruising around in the city and when you’re opening up on the highway, it lets people know you’re coming. And that is something I liked. I don’t want the guy clear across the city to know that I am ready everytime I thumb the starter. The thump is there, but it's for you to hear it, not your next-door neighbour at 3 in the morning.

Then came the actual ride. The seat is a bit narrow, but is comfy. You sit mostly upright allowing for longer days in the saddle. The footpegs sit just ahead of behind. Sporty when you feel like it, cruiser-esque when you want it. Handlebars are wide and sit high so muscling all that 200 kg around is much easier on the move. The vibrations, still there, can’t say no. You’ll see it in the mirrors, but that’s when you’re really revving it. It is less though, thanks to the two cylinders.

I put it through its paces

Surprise, surprise! It was good. Again. Whether I was carving up a mountain path or flooring it on the straights, I never lost my line. There is no wobble, no lack of grip and no lack of power anywhere in the rev band. The suspension, as I got it, was a little stiff in the rear end, so I could feel the potholes and bumps, but at higher speeds, it just sprang back fast enough so that I didn’t lose the road surface. Gears shifted smoothly and into the right slots, never once missing. Clutch engaged and disengaged just as I intended it to. And the weight of the bike didn’t feel difficult to turn in. In fact, it felt like it helped keep me planted. The only issue is windblast, but that’s easily remedied with a flyscreen. I love bikes. I never really liked Royal Enfield before, but the Interceptor had me at first rumble. Is it a big bike? Yes. Is it old school? Yes. Will people buy it for sentimental reasons rather than its real ability? Yes. But is it worth it? Hell, yes. I started off knowing the Interceptor is a good bike at least in the way it looks and on paper. I wanted to prove myself wrong. Well… Task failed, successfully!
Stanford Masters
Tags: #Auto #review #Royal Enfield #Royal Enfield Interceptor 650 #Technology
first published: Dec 17, 2020 08:40 pm