Apple Maps vs Google Maps: Which is the better virtual map application for you?

Has Apple Maps caught up to its Android alternative yet? We compare the two platform, UI and privacy features to find out which is the best virtual map app for you.

Maps have come a long way since the days of charting locations on a piece of paper. Navigation tools have made physical maps obsolete and have completely transformed the way we travel, explore and share directions. Today, Google Maps has become synonymous with the word ‘map’, even more so than an actual map. At WWDC 2020, Apple Maps got quite a few upgrades to take on its main Android counterpart.

Apple Maps was developed exclusively for Apple devices like the iPhone, iPad, Apple Watch; you get the gist. Google Maps, on the other hand, is built into all mobile devices, which means even Apple users can get it from the Apple Store. In fact, Google Maps is quite popular on iOS devices, with Apple customers preferring it despite the improvements made in Apple Maps.

Also read: Apple Maps brings Nearby feature in India; should you switch from Google Maps?

The interface for Apple Maps and Google Maps is quite similar. You can search for specific locations on Apple Maps using the search bar at the bottom of the screen and change settings like map, satellite, or transit by hitting the information button, which takes you to a second screen to make adjustments.

Google Maps also has a search box and different view modes and more options to charge your maps, including transit, satellite, driving, exploring, terrain, biking and traffic. The “Current Location” button on the screen available on both map apps. Moreover, Apple’s 'Look Around' feature is based on Google’s Street View feature, which allows you to look around as if you were walking down the street. 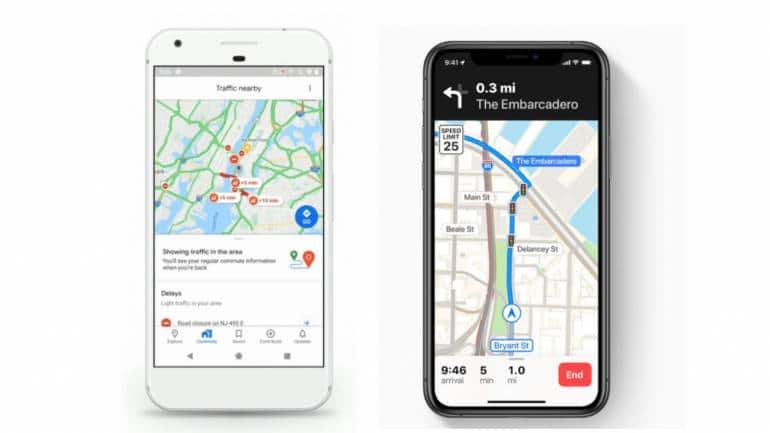 When it comes to the actual navigation screen, both applications are quite similar. Google Map’s satellite view has a more realistic look, while the satellite view on Apple Maps has a more photographic appearance since it uses vector graphics. If you zoom in to Google Maps, it presents an immediate sidebar with information about nearby locations, while zooming into Apple Maps you will see more locations pop up on the street.

Both map applications base arrival estimation on traffic conditions at the time. Both Apple and Google use different colours to indicate the traffic level on the road. You also see alerts from road closures to accidents.

Google Maps also allows several users to report on an accident or traffic jam in a certain spot. Google gives users a better idea when it comes to how traffic will impact a commute. Google also provides more options on the main screen, while additional options on Apple Maps will have to be pulled up from the bottom part of the screen.

Google also has customization and controls to improve privacy, such as Incognito mode, which keeps location and searches private. Apple, on the other hand, has quite a few features that make it difficult for apps to collect data and does not record your search history or movements.

Also Read: These iPhones are likely to support iOS 14: Is your iPhone on the list?

Apple Maps has come a long way since its inception in 2012. Most of Apple’s initial struggles have been overcome with iOS 12 and iOS 13, while the upcoming iOS 14 will only further improve Apple Maps.

However, Apple Maps is still playing catch up to Google Maps. In terms of ease of use and interface, Google Maps’ decade and a half experience give it a clear edge over its iOS competitor. It is worth noting though that both map apps are free and offer basic mapping features. We feel “privacy” is the only area where Apple has an advantage over Google Maps.