One could feel a sense of euphoria as one entered Bengaluru South, the constituency of BJP’s youngest candidate, the 28-year-old Tejasvi Surya.

The young and old alike waited to get a glimpse of Surya, who won the seat with a significant margin of over three lakh votes against Congress’ BK Hariprasad.

Surya’s name resonated in the constituency as the Election Commission (EC) handed the contest to him. Men and women adorned in 'Modi t-shirts' and saffron scarfs as celebrations with fire crackers greeted their youngest MP this election. 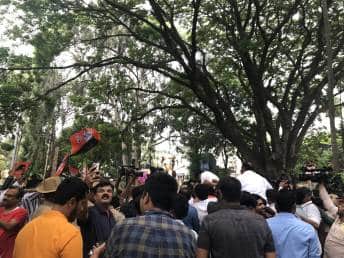 While Surya's victory may not have been a big surprise, the large margin -- of over three lakh votes -- was, say his friends and party workers who were trying hard to contain the excited crowd gathered to meet him when he reached the counting centre.

Surya was announced as the Bengaluru South candidate with barely a month left before the city went for polls, on April 18. It came as a surprise to many when the 28-year-old was selected to represent the constituency by the BJP.

Even so, the youngster is confident that he had full support of party seniors. “When a new decision is made it takes some time for the people to come to terms with it. Now everybody is extremely happy. All the seniors are supporting me now,” he added.

Sandesh P, Surya’s friend and classmate from Class 11 and 12, said, “With hardly a month left, the announcement was last minute leaving us with very less time for campaigning.” That did not deter the young candidate who tried to meet people in each block in his constituency.

Longer hours were spent in campaigning and ensuring that each block in the South was covered, from urban pockets to slums. His aim, Surya told Moneycontrol, was to reach out to each and every person in his constituency. He did not want to leave a single person out.

Surya is hardly new to the political scene. He started Arise India Foundation in 2008 to usher in social-political change in education in rural Bengaluru, which is still active. He was an active member of Rashtriya Swayamsevak Sangh (RSS)’s student organisation Akhil Bharatiya Vidyarthi Parishad (ABVP) and General Secretary of Bharatiya Janata Yuva Morcha -- BJP’s Youth Wing. He was also social media in-charge during the Karnataka state elections.

According to Sandesh, the young lawyer had always shown keen interest in politics, nation and development. “Surya would give politically inspired speeches during school festival and radio much to teacher’s chagrin,” Sandesh reminisced.

Talking about his interest in politics, Surya, said: “I had always felt that politics is the platform where you can get to impact a great many number of people lives. Sadly to a great extent until Narendra Modi’s arrival on the national scene, the youth or people of my generation felt disconnected with politics. Because we felt that politicians do not truly represent our aspirations and values.”

“So I thought if we don’t change it ourselves who will?” he asked.

Talking about is inexperience as a politician, Surya said, “Not having experience is itself going to be a blessing because the system has not yet tamed me. I will bring fresh energy, fresh insights and out of box thinking to problems of today.”

“There is just one primary agenda in this national elections – it is to re-elect Narendra Modi as the prime minister and continue the growth of India as secure prosperous modern nation,” he had said.

As a first-time MP, he still stands by that. “I am not expecting ministerial post and am happy that I was able to win. I will carry on Prime Minister Narendra Modi’s vision of new India in Bengaluru,” he added, while meeting media persons.