In what was a near-repeat of the 2015 Legislative Assembly election result, Chief Minister Arvind Kejriwal-led Aam Aadmi Party (AAP) on February 11 retained power in the national capital.

AAP bagged 62 out of the total 70 Assembly constituencies in Delhi. The main challenger — Bharatiya Janata Party (BJP) — won the remaining eight seats. In 2015, AAP and BJP had won 67 and three seats, respectively.

The result is likely to have an impact on politics of not just Delhi, but the entire country.

Here are the key takeaways:

AAP had run its campaign on claims of having delivered cheap and uninterrupted electricity and water supply, and educational reforms. There were other initiatives such as installation of CCTV cameras and free rides on public transport that were also highlighted.

Rejecting AAP’s claims of development, BJP had focused its campaign on nationalism and especially on the sit-in protest at Shaheen Bagh against the contentious Citizenship Amendment Act (CAA). The results data indicates that BJP’s campaign was not able to influence voters’ minds in constituencies beyond east Delhi.

With this win, AAP has secured for itself a third consecutive term in office.

Speaking to party workers after the poll win, Kejriwal asserted that “the people of Delhi have given birth to a new model of politics, which is the 'kaam ki rajneeti' (politics of work)”.

BJP lost the election by a wide margin in terms of seats. But it did manage to gain from the last time, when it won just three.

Additionally, political observers point out that running a faceless campaign hurt BJP’s prospects. The party had not named a chief ministerial candidate. This worked against the BJP as they were competing one-on-one against AAP, which has an undisputed leader in Kejriwal. 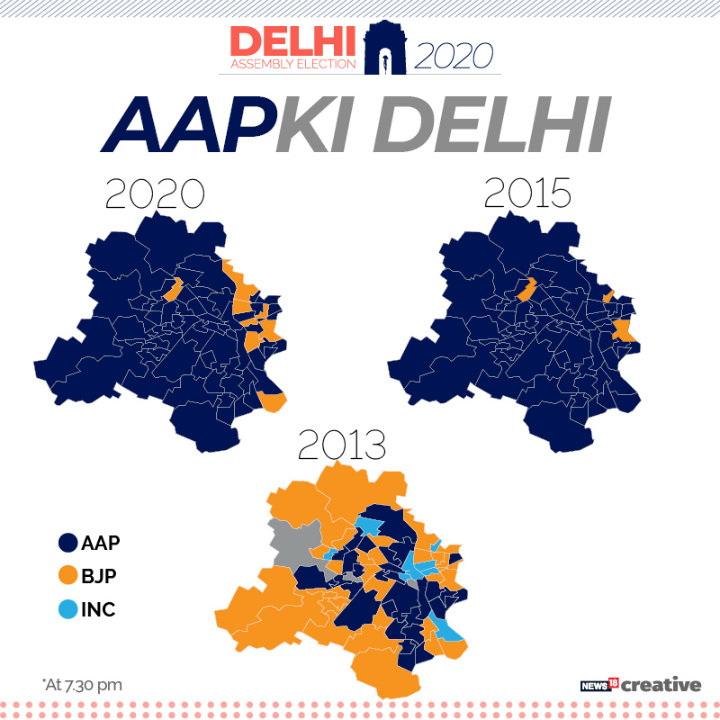 Election data shows that Indian National Congress, which was once a dominant political force in Delhi, has virtually evaporated from the political setting in the national capital.

The party, led by Sheila Dikshit, had governed the national capital for three consecutive terms between 1998 and 2013. However, this was the second straight election (following the 2015 polls) it failed to win a single seat.

Worse, the Congress, along with ally Rashtriya Janata Dal (RJD), lost its deposit in 67 of the 70 constituencies.

The three constituencies where Congress candidates were able to save their deposits were Badli, Gandhi Nagar and Kasturba Nagar.

Also read: Congress+ loses deposit in 67 out of 70 seats

The election result confirms that the people across the country are voting differently at the Centre and in the states. Meaning, a voter is not shying away from opting for different political parties while voting in elections for different levels of governance.

Besides Delhi, three states had gone for state polls after the 2019 general election concluded. These were Haryana and Maharashtra in October 2019 and Jharkhand in December 2019. In all of the three states, the BJP and its allies had done exceedingly well in the general election. However, they were unable to match their performance in the state polls.

In retrospect, election results in Chhattisgarh, Madhya Pradesh and Rajasthan also fit into this pattern.

Moneycontrol had reported about the emergence of this voting pattern ahead of the Delhi election.

This result comes around eight months before the Bihar Legislative Assembly election. BJP and its ally, Janata Dal (United) are in an alliance. They are expected to fight the election together. In fact, BJP leader Amit Shah has said that they will fight the polls under the leadership of JD(U) chief and Chief Minister Nitish Kumar. However, there has been no formal seat-sharing deal yet.

Having lost power in Maharashtra, having failed to secure a majority on its own in Haryana and now with losses in Jharkhand and Delhi, BJP may have lost its hard-bargaining power when it comes to seat-sharing negotiations in Bihar.