India’s IT services are on digital steroids (Part II)

IT services companies with exposure to BFSI, TMT, and healthcare have done extremely well over the last year. In future, rapid digitalisation is expected to drive a surge in technology spending across industries

Industry vertical strength continues to play a significant role in determining growth profiles of companies in the IT services industry. In fiscal year 2020–21, some verticals, such as banking, financial services, and insurance (BFSI), technology, media, and telecommunications (TMT), and healthcare, continued to spend big on technology to accelerate digitalisation. As a result, IT service companies with strong capabilities in these verticals showed tremendous growth.

However, other industry verticals, such as travel (including aviation), offline retail, auto, and heavy industries, have faced headwinds over the last 12 months. Some of these, like retailers, are innovating by strengthening omni-channel strategies and moving to cloud while others, like aviation, are focusing on cost takeout until revenue picks up again.

The growth drivers for IT services companies in fiscal year 2020–21 were BFSI, TMT, and healthcare.

BFSI continues to be the largest vertical for most large and mid-tier Indian companies, contributing to a third of revenues on average. Growth in BFSI outpaced overall growth for most companies. For instance, for Indian mid-tiers, growth of BFSI revenues on an average was double the company growth rate. The same was true in case of the TMT industry vertical — which accounts for roughly a fifth of the revenues of large and mid-tier Indian IT service companies.

Healthcare, though a small part of revenue for large Indian IT services companies (average of approximately 10–15 percent) also grew significantly in fiscal year 2020–21. The average YOY growth in healthcare for large (top five) Indian services players was 8–10 percent, much higher than their average company growth of around 1 percent.

We expect these verticals to continue performing well in the future. However, rapid digitalisation is expected to drive a revival in technology spending in other sectors as well. Looking forward, Gartner’s ‘Forecast: Enterprise IT Spending by Vertical Industry Market, Worldwide’ predicts that most industries will grow faster in 2021–2024 vs 2018–2021. For IT services companies, the choice of industry verticals is important. But even more important is the ability to target their industry verticals of strength with the right value propositions — since there are opportunities for growth in every industry. Understanding the digital maturity of different end industries is key to doing it. 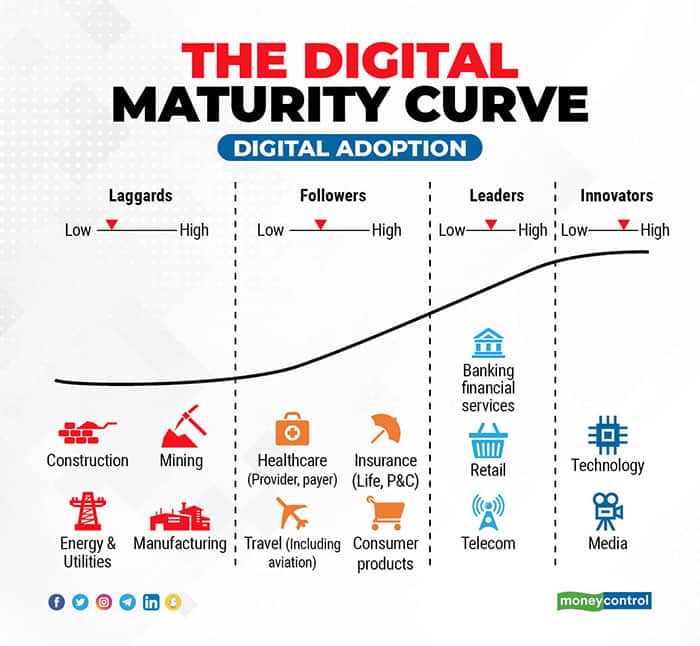 Laggards (mining, energy, etc.) typically have rigid designs and processes that are slow to change. Cost efficiencies are a key factor for these companies to invest in digitalisation and outsourcing. Operations Tech or Industry 4.0 (smart warehousing, Internet of Things (IoT) for predictive maintenance, etc.) as a concept is becoming increasingly popular. But the key point for services companies to remember is that the buyer for such services is often quite different from the buyer of IT services.

Followers (insurance, healthcare, travel, etc.) are making themselves future-ready by modernising core systems and migrating to cloud services. They are also seeing a surge in outsourcing as they invest in new-age technologies (such as IoT and artificial intelligence). Cost reduction to fund the modernisation continues to be key.

Each of them will have their own specific nuance as well. For instance, retail will invest in IoT, such as contactless shopping, smart shelves, etc. Banking will continue to invest in creating digital/neo banks, omni-channel experience and modernising core systems. Telecommunications will continue to invest in 5G-related opportunities. Some leaders are also looking to reduce their fixed costs while transforming their operations, by selling their captive units, as some recent large deals announced by the large Indian players indicate.

Innovators (technology and media) will continue to lead the pack on innovation and need for digital talent. Tech companies will also continue to transition their products to Software-as-a-Service (SaaS). They will look to reduce spending on legacy and older products, providing an opportunity for IT services players to provide sustenance services.

The message for Indian IT service companies is clear: strengthen presence in high growth industries such as BFSI, healthcare, and TMT. But more importantly, identify industry verticals and micro-verticals of strength, and build capabilities to target these verticals based on their digital maturity. The next few years will present opportunities for growth across industries.

Its good times ahead for Indian IT services!