The industry crossed $200 billion revenue, by adding $30 billion in the last year, as the rapid pace of technology adoption and migration to cloud post-pandemic boosted the demand for outsourcing services

The Indian IT industry has crossed the $200-billion mark in revenue this fiscal, creating a watershed moment for India's technology services sector, according to a report by NASSCOM.

It also cemented its position as the largest private-sector employer in India, accounting for 5 million direct jobs, with over 2 million added in the last 2 years. Of this, 450,000 was added in the FY2022 alone, the highest addition ever as companies stepped up hiring to meet the rising demand. Close to 1.8 million were women employees, with 200,000 hired in FY22, according to the Strategic Review report released by the IT industry body NASSCOM on February 15.

The industry, which includes IT services, BPM and captives, added $30 billion in incremental revenue and grew 15.5 percent, highest ever since 2011. This came at the back of rapid pace of technology adoption and migration to cloud post-pandemic boosted the demand for outsourcing services. 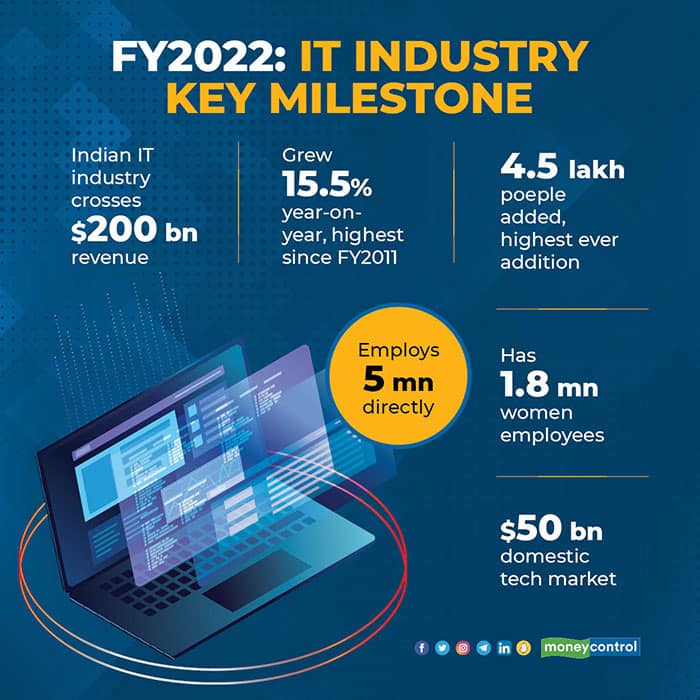 The report estimates that the FY2022 revenues for the Indian technology services will be $209 billion, with 30-32 percent of the growth coming from digital. With the industry growing at 11-14 percent, the sector revenue is projected to reach $350 billion by FY2026, the report revealed.

It witnessed double-digit growth across sub-sectors, the highest in a decade. $178 Billion exports contributed to 51 percent share of India's services exports, with the domestic tech market pegged at over $50 billion.

Union Minister for IT Ashwini Vaishnaw, said during the report launch that the industry's resilience has given more confidence to the global economy about the Indian IT industry and is also evident in the $200 billion milestone the industry crossed. Vaishnaw also pointed out the efforts made by the sector in the employment addition, as it added a record 4.5 lakh people this year.

This momentum is likely to continue.

According to the 2022 NASSCOM CEO Survey, 70 percent of the CXOs surveyed expect 2022 to be another year of growth driven by digital, and 80 percent expect the hiring momentum to be the same as last year. The report said that hiring from campuses and non-engineering talent will increase in 2022, with digital talents accounting for up to 50 percent.

Talent is a challenge

While talent is one of the key challenges the industry is facing, the report said that with the tech talent demand supply gap at 21.1 percent, it is the lowest in the world.

Speaking to media persons during the launch of the report, Debjani Ghosh, President, NASSCOM, said that the industry body is working with the industry and academia to address the issue.

The shift towards hiring in the tier-2 and tier-3 cities, a key focus area for the companies, will also help bridge the talent supply gap and efforts are on to address the same. For instance, Tech Mahindra's CEO & MD CP Gurnani in a recent interview said that it expects 20 percent of the workforce to be from the tier-2 and tier-3 cities in the next 2 years.
Swathi Moorthy