Himatsingka Seide: A consistent performer with a solid outlook

The company continues to leverage on its fundamental strengths optimally, as evident from the numbers in the quarter gone by.

Himatsingka Seide Ltd (HSL) posted a strong set of numbers and stood out as a bright spot in the earnings season marred by multiple misses, especially from the midcap space.

Expectedly, while the stock reaction was resoundingly positive, we feel the road ahead looks bright enough for the company to support this sentiment. From a year on year perspective, while HSL's turnover grew by 11.4 percent, operating profit rose by 20.9 percent owing to improved gross margins.

Despite the higher depreciation on account of the capex, the company managed to protect its bottom-line, thanks to stability in interest outgo and higher other income.

The incremental bed sheeting capacity of 23 million metres per annum (mmpa), which was commissioned back in October 2016, primarily aided sales growth during the recently concluded quarter.

As per our previously stated rationale, HSL remains on course to gradually improve the utilization rate from this facility, which, in turn, should boost sale volumes.

HSL’s gross margins are expected to grow from Q4FY18 with the greenfield spinning project coming on stream by December 2017. The yarn output from the unit will exclusively cater to the company’s sheeting department. With the conclusion of this project, most of the capex will get over too.

Construction of the terry towel plant (capacity – 25,000 tons per annum) will commence in the second half of FY18, the funding for which will be undertaken through a combination of internal accruals and debt. We have not factored any upside from this in our estimates yet.

HSL aims to increase the share of its margin-accretive branded products to total consolidated revenues (from the present level of 50 percent) through consolidation and expansion. Consequently, the contribution of the company’s private label portfolio will reduce.

Indian Rupee’s appreciation against the dollar poses negligible risk to HSL in the near-term owing to its hedging policies. However, in the event of a sharper appreciation, the company may be forced to take other initiatives like pricing revisions and profile mix changes to protect its financials. 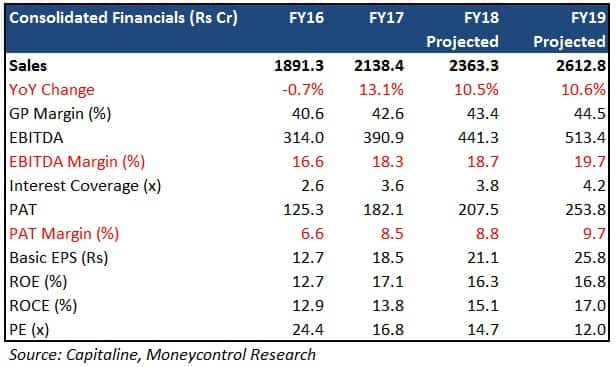 HSL's earnings potential seems robust on the back of fundamental strengths and some tailwinds. The result of this quarter hasn’t altered our view or estimates. At 12x FY19 projected earnings, this is undoubtedly a stock you wouldn’t want to miss out on.