Coronavirus pandemic | Slums are new hotspots that can ravage cities

Slums are a big worry as a lockdown will not work there and the highly contagious virus can spread rapidly, posing a danger to cities as well.

The Maharashtra government last week acknowledged a new problem–slums. The coronavirus that had sickened the relatively affluent had now percolated into the Mumbai’s slums, where the highly contagious virus can spread and hit with several times the earlier intensity. This even as Dharavi, Asia's largest slum, saw one dead and one infected by the novel coronavirus, or COVID-19, pandemic.

A couple of days later, the Centre also changed its strategy by focusing on hotspots. A few days earlier, former RBI governor Raghuram Rajan, in an interview to Bloomberg, had said a lockdown was not enough to contain the virus, especially in slums, where people would end up spending a lot of time in close proximity. 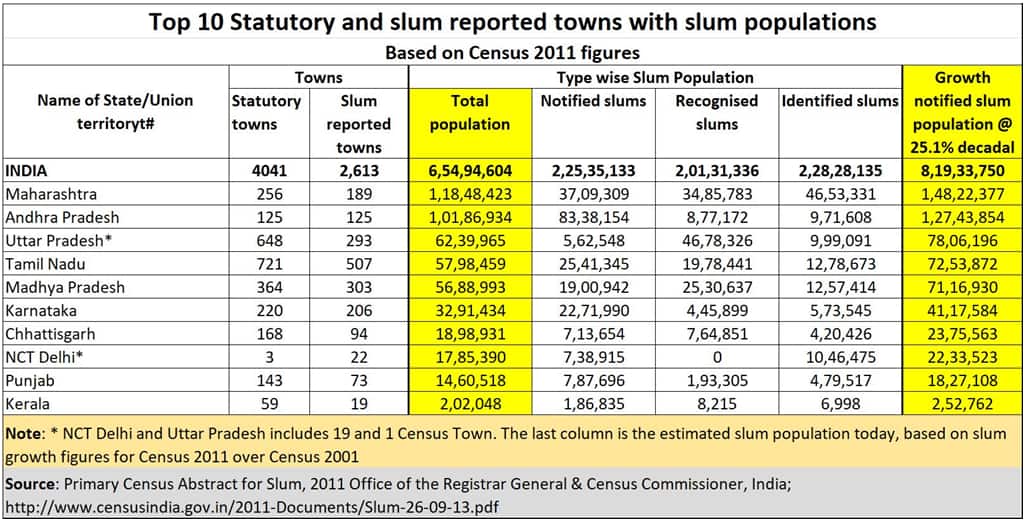 Maharashtra is obviously the most perturbed—it is the slum capital of India. And this is borne out by the Census data (Primary Census Abstract for Slum, 2011 Office of the Registrar General & Census Commissioner, India).

In just one decade—from 2001 to 2011—India’s slum population swelled by 25.1 % against average population growth of 17.6%. Since law-abiding folks, too, look for jobs and flock to cities, the growth rate for slum dwellers and the rest of the population should have been the same. The difference suggests that someone incentivised people to form slums.

And it is common knowledge that one reason politicians love creating slums is to change the demographics. It ensures that the ruling party’s candidates get elected. It is like stuffing ballot boxes. 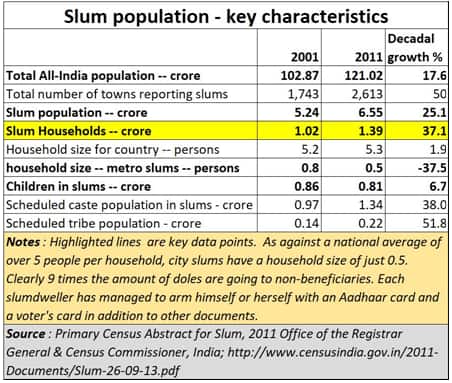 Slums offer politicians another advantage–a conduit for diverting funds. Nothing highlights this better than the Census data, which shows that the rate of growth of slum households at 37% was higher than the growth of the slum population.

It can be deduced that the primary reason why households grew faster than the population is that almost all government incentives (subsidised electricity, gas cylinders, rations, etc) are given to households. Thus, it makes more sense for siblings to call themselves separate households. Since this is not possible without the collusion of the authorities, it is possible that they, too, shared the spoils.

How big could this subsidy amount be? That can be gauged from yet another figure---the number of people per household. In slums across India, against a normal density of 5.3 people per household, slums had an average size of 0.5. This means that ten times the normal subsidy was billed to slums. The pickings would be unbelievably large.

And now slums have become the biggest danger to politicians. Unlike cholera, malaria and diarrhoea which have been around for decades and which largely affect the poor, the coronavirus sickens the affluent as well.

In initial stages, it was largely confined to people who travelled by plane or cruise ships. Now it has reached the slums. A recent Mumbai Live report said four people, living in different chawls and slums of the city had tested positive. These are the hotspots that can ravage an entire city.

This is because there is just no way to lockdown a slum or maintain social distancing. Many people to a room, unsanitary conditions of living, common toilets that are not cleaned for days (in Mumbai, many slum dwellers have gone back to open defecation) and poverty. And in this cheek-by-jowl existence is a fertile ground for the spread of the virus.

The only solution is more and more testing – random testing – the way Singapore, Japan and Korea have done.  But, as all state government officials have said, there are few testing kits.

The Centre has restricted the import of kits to only government hospitals and 12 licensed private testing laboratories. And contrary to the recommendation of the Indian Council of Medical Research (ICMR) that the tests be free, private laboratories will charge Rs 4,500 per test--a price that slums cannot pay.

The government can charge a patient Rs100 and pay the remaining Rs 4,400 to the private labs. It will make tests affordable, but the government should involve a price to prevent indiscriminate and irresponsible testing. But so far, the Centre is unwilling to foot the bill.

State governments will also not pick the tab till they are sure that they will get their share of goods and services tax and other amounts right away, so that they can pay for the tests.  More significantly, they want the right to import testing kits themselves, so that they can find more cost-effective alternatives.

For instance, last week American medical devices company Abbott Laboratories announced it had come up with a testing kit that can analyse a coronavirus infection in five minutes and a negative result in 13 minutes. It has received emergency FDA approval and will begin producing 50,000 kits a day this week, media reports said. The pricing is not yet known.

Similarly, UK-based Mologic Ltd in collaboration with Senegalese research foundation Institut Pasteur de Dakar has promised to bring down in three months the cost of kits to $1 and testing time to10 minutes.

The Centre should immediately allow state governments to tie up with such entities and import in bulk equipment to allow large-scale testing of slum dwellers (even repeatedly, if required).

Such a move will ensure that those testing positive are immediately isolated for treatment. The spread of the virus can only be stopped by immediately identifying the infected.

The Centre does not permit state governments to import or to licence its own testing centres. This must change because states must deal with slums, which they created in the first place. Similarly for drugs like Hydroxychloroquine, which the ICMR has identified as a prophylactic for frontline warriors like doctors and paramedic staff , the government should immediately licence production of larger quantities. Most stores do not have the drug, as it has got sold out.

All this is required in slums. This is because the growth of slums in cities has been an epidemic by itself. Go back to the Census and you will find that the number of cities with slums increased from 1,743 in 2001 to 2,613 in 2011. Today there could be at least double the number. The focus on hotspots is understandable. The urgency is palpable. The only solution is more testing, and affordable (even free) testing.

If the Centre does not do this, the result could be a wildfire that no one will be able to control.