While government consumption has crossed pre-pandemic levels by 10 percent, private consumption continues to be at 97 percent of what it was before the pandemic hit. Investment to GDP ratio hit its highest point in 7 years.

Even as the economy comes out of the grips of the COVID-19 induced slowdown, private consumption --crucial to cement economic growth -- is yet to catch up to the pre-pandemic levels, the Economic Survey 2021-22 has said.

"Latest advance estimates suggest full recovery of all components on the demand side in 2021-22 except for private consumption. When compared to pre-pandemic levels, recovery is most significant in exports followed by government consumption and gross fixed capital formation. However, an equally strong recovery was seen in imports," the Survey, tabled earlier today in Parliament said.

Private consumption, a measure of all the money spent by consumers in the country to buy goods and services, rose 6.9 percent in 2021-22, reaching 97 percent of its pre-pandemic levels. Considering private final consumption expenditure is the largest contributor to the GDP, its return to 6-7 percent growth rates without the assistance of a favorable base is crucial. But with the pandemic wreaking havoc with household incomes, it is not a surprise that private spending is where it is.

Meanwhile, the Survey noted that India’s exports of both goods and services have been exceptionally strong so far in 2021-22. Merchandise exports have been above $30 billion for eight consecutive months in 2021-22, despite a rise in trade costs arising from global supply constraints. Both exports and imports have recovered beyond their pre-pandemic levels, currently standing at 11 percent higher than back then. 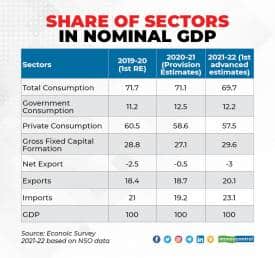 Only way is up

"Private consumption is poised to see stronger recovery with rapid coverage in vaccination and faster normalisation of economic activity," the Survey said. It argued that this belief is supported by a sharp rebound in HFIs like IIP Consumer Durables.

However, the Survey also accepted that deep challenges remain. "However, the recent dip in vehicle registrations reflects persistent supply-side constraints owing to the shortage of semi-conductor chips rather than the lack of consumption demand," it said.

Investment, as measured by Gross Fixed Capital Formation (GFCF), is expected to see strong growth of 15 percent in 2021-22 and achieve full recovery of pre-pandemic level, the Survey said.

The government’s policy thrust on quickening the virtuous cycle of growth via capex and infrastructure spending has increased capital formation in the economy lifting the investment to GDP ratio to about 29.6 percent in 2021-22, the highest in seven years.

While private investment recovery is still at a nascent stage, there are many signals indicating that India is poised for stronger investment. The number of private investment projects under implementation in the manufacturing sector has been rising over the years.

The Reserve Bank of India’s latest Industrial Outlook Survey results indicate rising optimism of investors and expansion in production in the upcoming quarters.

Subhayan Chakraborty has been regularly reporting on international trade, diplomacy and foreign policy, for the past 6 years. He has also extensively covered evolving industry and government issues. He was earlier with Business Standard newspaper.
Tags: #Budget 2022 #Economic Survey 2022
first published: Jan 31, 2022 04:11 pm