Vistara non-stop flights to US: The challenges and opportunities for the Tata-SIA airline

Vistara, the Tata-Singapore Airlines joint venture, has filed for permissions in the US to fly from September this year. A look at how the flights operations could play out.

Vistara, the Tata-Singapore Airlines joint venture, has filed for permissions with the United States Department of Transportation (DOT) to fly to that country starting September this year. International flights are governed by Bilateral Air Services Agreement (BASA) and India and the United States have an open skies agreement, which means there are no restrictions either on capacity or number of flights between any two points between the two countries. As long as the airlines are designated carriers and cleared by both regulators,  the airlines are free to fly subject to slots.

Vistara would join a long list of carriers that have in recent years grown by routes served between the two countries. While currently airlines are barred from carrying traffic via hubs,  this is not a permanent arrangement. Yet, the pandemic could see people opt for non-stops over a transfer at hubs to ensure that one does not come in contact with more people while connecting flights.

However, the long haul is not a year-round profitable segment and in current times, much would depend on how the pandemic and vaccination spans out in India.

One of the many steps

The airline has already been designated as an international carrier and operates its widebody aircraft to London Heathrow and Frankfurt, for the United States. Filing for permission is one of the many steps to finally launching flights.

Foreign air carriers, or operators, that want to conduct passenger or cargo operations to or from the United States must obtain a permit issued by the Department of Transportation (DOT). US regulator Federal Aviation Administration (FAA) and International Field Offices (IFO) are responsible for the issuance and amendment of foreign air carrier operation specifications.

The foreign carriers need to adhere to standards related to Personnel Licensing, Operation of Aircraft, Airworthiness of Aircraft and Safe Transport of Dangerous Goods by Air. Regulations outlining the acceptance, handling, transport of dangerous goods and required training are found in the Hazardous Material Regulations (49 CFR Parts 100-185) and the International Civil Aviation Organization (ICAO) Technical Instructions (TI) for the Safe Transportation of Dangerous Goods by Air. Compliance with the ICAO TI (including US State Variations) as well as 49 CFR 175 regulations is mandatory.

The airline would then proceed to seek slots at both the airports before seeking regulatory approval for the flight which paves the way for opening up the flight for sale and other marketing activities before the first flight.

While Vistara has been silent in stating the airports where it wishes to fly in the United States, it would be almost certain that it operates the flights from New Delhi, which is its hub in India.

The airline has six B787-9 Dreamliner on firm order of which two are already inducted and one is stored at a Boeing facility. These do not have the crew rest area needed for over 8-9 hours of flying.

The existing aircraft is configured with 299 seats comprising—30 Business Class, 21 Premium Economy and 248 Economy class seats. American Airlines will operate the Seattle-Bengaluru flight with the B787-9 and United already operates a few of its India flights with the B787-9.

With the “Overhead Flight Crew Rest” option, the airline could see a change in its seating configuration. Non-stop flights to the United States (or Canada) operate with two sets of crew, and the Crew Rest Area is a mandatory requirement.

It will be interesting to see if the airline will look at other options such as leasing another widebody aircraft in the fleet. The airline may not be averse to the idea since it had gone ahead and inducted other types of aircraft (B737s), which were earlier with Jet Airways. This was done to get additional slots across the country though.

Equity partner Singapore Airlines and many other airlines across the world have spare aircraft. The airline could consider B777-300ERs, which Etihad recently decided to phase out. This is an aircraft that Air India operates on many of its non-stop flights between India and the USA.

The airline could try the densest route from Delhi to New York. It could be easier to get a slice of a larger pie than to create a pie from scratch. 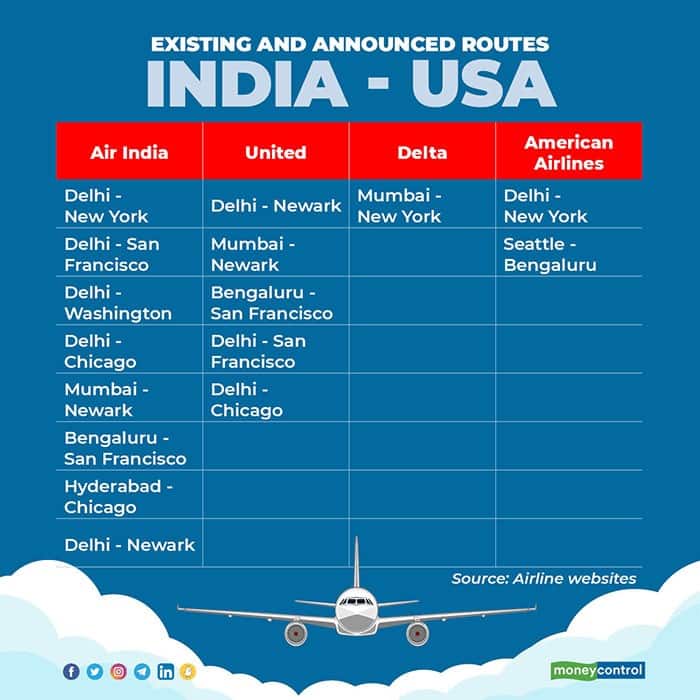 The India-US market has been a duopoly of Star Alliance carriers Air India and United for quite some time. Delta’s return to India has been short-lived due to the pandemic and American Airlines is still a few months away from starting its service to India.

Where will Vistara fit into this bit would be an interesting puzzle to solve. Neither does the airline have a strong domestic network to feed into its flights nor does it have a brand that will make a mark in the United States.

Delta, American, United and Air India are part of alliances with non-stop flights to India. That makes Vistara the only carrier without being part of any global alliance on these routes.

On the other side of the pandemic, the airline will also have to compete with the likes of Emirates, Etihad and Qatar Airways in addition to some of its own partners like Lufthansa, British Airways and JAL that look for traffic between India and the USA via their respective hubs.

The last twist in the tale could be the Tata group bagging Air India which will make it the largest carrier between the two countries, almost overnight.