PG Aditiya tells us how it feels to win Grand Prix at Cannes Lions for Dentsu Webchutney, an agency he quit recently to start Talented. With most of the team that made The Unfiltered History Tour.

'The Unfiltered Tour' has so far won a Grand Prix, a Gold, a Silver, and two Bronze Lions at Cannes this year. (Image via Twitter/TheHardCopyCo)

VICE World News’ The Unfiltered Tour campaign is stealing the thunder and the trophies at award shows across the world this year. At the world's most prestigious ad award show Cannes Lions, The Unfiltered Tour has already got quite a haul - a Grand Prix, a Gold, a Silver, and two Bronze Lions. It has also qualified under many other categories and may bring home some more Lions.

The work was led by PG Aditiya and Gautam Reghunath when they ran the show at Dentsu Webchutney. It took the duo and an army of writers, animators, sound engineers, researchers, historians, freelancers, and a client team to conceptualise and execute the ambitious project. 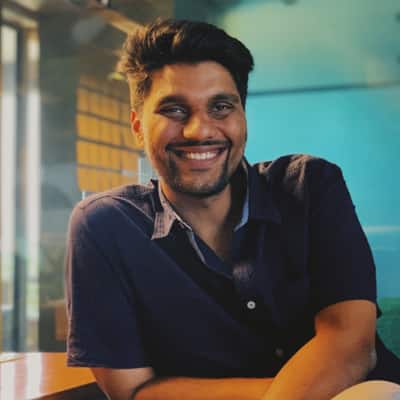 Eighteen months were spent putting together a guided tour for visitors at the British Museum, which houses some of the world’s most disputed artefacts. Through The Unfiltered Tour, visitors to the museum could scan the artefacts using Instagram filters and unlock an augmented reality (AR) experience that visually teleported the objects back to their homeland.

Aditiya and Reghunath executed the campaign and then decided to call it quits at Dentsu Webchutney. A few core team members on the campaign also left the agency to join the both of them at Talented, the newest creative shop in town.

Dentsu Webchutney has been entering the campaign for awards and has been bringing shiny metal home from across the globe. Every time a few trophies are added to the agency’s shelves, they tag Aditiya, Reghunath, and a few others on social posts giving them due credit and respect. So much so that Gurbaksh Singh, chief innovation officer, Dentsu Creative India, couriered a replica of the Grand Prix trophy to Reghunath before he flew to Cannes and asked him to unbox it when they win. Singh had a gut feeling that the campaign will go far and wide.

Three screenshots worth and plenty more!

The team spirit of Dentsu Webchutney and Talented is setting the right example for the industry. It says a lot about how the Indian creative community is becoming more mature when it comes to sharing credit. As technically these trophies are going to Aditiya and Reghunath’s former agency, we asked Aditiya how it feels when that happens and more. Here’s what he had to say:

What is it like when you get big awards (not technically) for a mega campaign that you worked on for your former agency? How does it feel to see trophies on their shelves?

Proud. Nervous. Exciting. Fulfilling. Confusing. Challenging. All sorts of feelings, to be honest. But I know The Unfiltered History Tour is proud of us. It started as a casual conversation between Gautam (my ex-CEO at Webchutney and now co-founder at Talented) and me, referencing an episode from Empires of Dirt - a VICE original series on YouTube that we both loved. Ever since, over a 100 people have stepped in to do the bravest work of their lives (yet), amidst a raging pandemic, across 10-plus countries - and some of us, for months even after moving on from our jobs officially… because this discourse matters. We’re already seeing its impact with smaller museums and private collectors around the world changing their stance on repatriation. The history buff in me is overjoyed.

The creative person in me knows what he signed up for. Most of the members of The Unfiltered History Tour’s core team are now our founding team members at Talented. We’re all grateful to have left an agency we love dearly after crafting our most impactful project yet. And now, we’re working together again, as a founding team, to build our own agency from scratch. The Unfiltered History Tour is on record our last huge win at Dentsu Webchutney, but in spirit, it’s our first huge win at Talented. We can’t wait to outdo it.

The Lions are not coming to your new work address. What’s your tip for folks who are in a situation like yours?

I think the Lions are coming to our new address in every way - apart from the ‘technical’ one. Funny coincidence that this project is also about topics like ownership and representation.

Make no mistake, we want Talented’s clients to challenge us to outdo the craft, research, detail and commitment our leadership gave the Unfiltered History Tour last year. We want our colleagues to expect nothing less than the kind of deep learning and management their founding team perfected while working on this project. We also want our favourite ex-colleagues and newbies at Dentsu to be motivated by these massive wins like never before.

I’m convinced that the impact of the tour is large enough for more than one or two entities to bear its fruits. We’ve worked with Pixel Party, an incredible external tech-partner for developing and deploying the Instagram filters. With Shaleen Wadhwana, an external cultural historian who helped us perfect our visual narrative. With Ronak Chugh, an external director from Rooted Films for the project’s trailer that went viral worldwide. With over two dozen consultants and  freelancers, over 18 months. Each of them and their organisations consider The Unfiltered History Tour their most impactful work to date. These Lions, symbolically if not physically, belong in all of these work addresses.

What according to you makes ‘The Unfiltered Tour’ a winning campaign piece?

It is the first large-scale project around colonialism to be recognised by global creativity festivals. I think juries across shows have found it a necessary discourse to recognise. They’re impressed by the boldness and irreverence in its execution. And they find it a great translation of VICE’s mission to push underreported stories and narratives.

What's a bit about the campaign you haven't shared yet?

How we pitched it. The Unfiltered History Tour's first-ever presentation to VICE was through a scratch film - not a narration of the idea. While the numbers, tone and details in this scratch are all only illustrative - it helped everyone get on the same page about our broad intent, execution and potential for impact in one go. Probably one of the best early decisions in the project that set the tone for the next 18 months.
Priyanka Nair is Assistant Editor of Storyboard. Storyboard is Network18's flagship platform focussed on the advertising & marketing community and a leading source of news and analyses on the business of brands
Tags: #advertising awards #Brand makers #Cannes Lions #Dentsu Webchutney #Empires of Dirt. #Grand Prix at Cannes Lions #Indian ads #PG Aditiya #Storyboard18 #talented #The Unfiltered History Tour #The Unfiltered tour
first published: Jun 22, 2022 08:37 am