Investors can take fresh some exposure to the beneficiaries of rising fuel/power prices, advises one analyst.

Momentum in coal, power and oil and gas stocks are likely to be strong in the coming weeks as the energy crisis in India and China are unlikely to fade soon. Although rising energy prices do not impact all companies favourably, the sheer undervaluation of some public sector companies in the sector are driving investors to latch on to them, market experts said.

The two main beneficiaries of rising energy prices - ONGC and Coal India - gained 10.77 percent and gained 4.21 percent, respectively, on the BSE on October 5. Although state-owned power generation company NTPC was a marginal loser, it has been clocking steady gains in the past few weeks, along with other energy companies like HPCL, BPCL, IOC and certain private power producers.

Coal India is gaining on the back of supply disruptions in coal, which has caused a major power shortage in China and India, two of the largest economies in Asia. The two countries are the biggest importers of coal and together account for around 65 percent of global consumption. Both countries are still heavily dependent on coal as the fuel for power generation.

Why coal prices are rising

Globally, coal prices have increased by more than 200 percent from March 2021-September 2021 because of the surge in industrial demand, rebounding power demand in China, Beijing’s informal ban on imports from Australia, supply disruptions in Australia, South Africa and Colombia, and rising global gas prices.

Rising import prices of coal have prompted power-generating companies in India to shun imports and rely more on domestic supply. State-owned Coal India is the biggest supplier. Even though Coal India supplied 12 percent more coal this year, compared to last year, it is not keeping pace with the increase in demand, especially when economic activity has zoomed after COVID restrictions were eased.

Power-generation companies were not able to build up stocks to meet the increasing demand and are now reeling under severe shortage of fuel.

How much shortage is India facing?

The situation from the second half of September turned a bit more tight due to supply-side issues. According to power ministry data, India has 135 thermal power plants, feeding most of the power demand of the country. These plants have an average of just four days of coal stocks, as at the end of last week, down from 13 days of inventory in early August. At some plants, the inventory levels are as low as three days.

Suvodeep Rakshit, Senior Economist, Institutional Equities, Kotak Securities, feels “high demand, coinciding with the usual supply frictions, post monsoons and the spike in global coal prices have been the main reasons for the power issue. With global coal prices increasing significantly, a few thermal power plants may be under some stress.”

Deepak Jasani, Head of Retail Research, HDFC Securities, adds: “Geopolitical disputes and deliberate slowing down of dispatches by energy producers have resulted in spiralling prices and shortage of power, globally.”

Other fuels like oil and gas are also facing demand-supply mismatch due to which their prices have sky-rocketed. Low inventories in the US, Europe and Asia, coupled with the unwillingness of oil-producing nations to increase production, are proving detrimental.

“The energy crunch can, in the worst-case scenario, lead to stagflation. If the government comes to the rescue to keep prices under control, their fiscal situation can deteriorate,” Jasani said.

As the world scrambles towards cleaner fuels and tries to become ESG (Environment, Social and Governance)-compliant, gas prices have shot up significantly. The rise in global gas prices have led to a rise in domestic prices as well.

How energy stocks are faring

Be it power or oil and gas, share prices of the whole pack are rising, irrespective of where they are in the value chain. Producers of oil, gas and coal stand to benefit the most as a result of this demand-supply mismatch. But, over the past few sessions, almost all stocks related to the energy sector have become the market favourites and are topping the charts.

Exploration and production companies like ONGC, OIL, Reliance and Cairn Energy stand to benefit from this rise in gas prices and can witness a rise of about 6 percent in their earnings.

However, it has the risk of regulation as its prices can be capped. Reliance and Cairn Energy will be the natural beneficiaries. Reliance Industries has been buoyant not only because of optimism around refining margins, but its mega plans around green energy is also attracting attention.  Morgan Staley expects silicon and hydrogen to be the ‘new oil’, with a potential of $60 billion in value creation by 2025.

The rise in crude oil price augurs well for oil marketing companies (OMC) like BPCL, HPCL and IOCL, which can see an improvement of about $0.5/bbl in their Gross Refining Margins (GRM).

GRM for OMCs are currently around $3.5/bbl Singapore levels, while the marketing margins of petrol and diesel are in the range of Rs 4 per litre. The rise/fall in marketing margins will depend on how much of the increase in costs can be passed on to consumers. 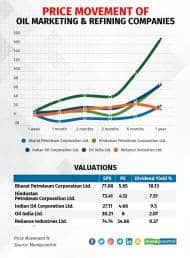 “Gas distributors such as Gujarat Gas, MGL and Indraprastha Gas may face margin pressure if they are not allowed to pass on the rising input costs,” says Rakshit.

Coal India, being the largest domestic producer, may see some upside but one must not forget that 90 percent of its production is regulated by the government, due to which it cannot jack up prices.

It hit a 52-week high of Rs 198.60 on October 5, on the news of diversification of business in areas like solar wafer manufacturing, solar power generation, surface coal gasification and coal bed methane. 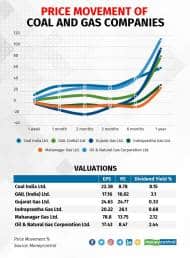 Generation and transmission companies, like NTPC and Power Grid, will not have any material impact of the rise in input costs as they have a pass-through mechanism, where the increase in generation costs get passed down to the next level.

Private players like Tata Power, JSW Energy and Adani Power are not likely to be impacted as they source coal from captive mines abroad. 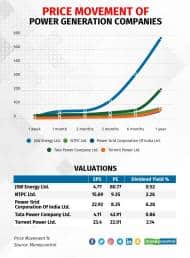 “Investors could monitor the situation closely for any hint of the situation easing. In the meanwhile, they can take some exposure to the beneficiaries of rising fuel/power prices. They could largely hold on to shares that are affected negatively if their long-term prospects remain solid,” advises Jasani.

Disclaimer: The views and investment tips expressed by investment expert on Moneycontrol.com are his own and not that of the website or its management. Moneycontrol.com advises users to check with certified experts before taking any investment decisions.
Gaurav Sharma
Tags: #coal price hike
first published: Oct 6, 2021 10:45 am