Here's a snapshot of startup funding for the week ended March 19, 2021.

Insurance marketplace Policybazaar raised $75 million in the run-up to its public offering- the largest deal in the week ended March 19, 2021.

Leap Finance, which is looking to make studying abroad easier with dollar-denominated loans among other things, raised $17 million from Jungle Ventures and existing backer Sequoia India.

The action also continues in the health and wellness segment, especially for brands. Plant-based nutrition brand Oziva said it has raised $12 million in a Series B round from Eight Roads Ventures and Flourish Ventures- spun off from Omidyar Network. 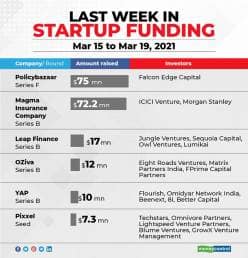 Meanwhile, payments software platform YAP raised $10 million in a Series B round from Omidyar Network and Flourish Ventures. The startup provides APIs for the financial services industry. An API, put simply, is a piece of software that helps two apps to talk to each other. It is like a messenger that takes your message, delivers it to the app you want to interact with and gets back a response.

Pixxel, a space-tech startup, raised $2.3 million more from Omnivore Partners and Techstars to wrap up a $7.3 million seed funding round. Pixxel, which makes small imaging satellites, also counts Lightspeed India and Blume Ventures among its investors.

IndiGo offers up to 10% discount to vaccinated passengers