The Economic Survey said India’s low expenditure on research and development (R&D) activities as one of the reasons for relatively low patents in India compared to the ilk of the US and China. The expenditure on R&D activities stood at 0.7 percent of India's GDP in 2020.

Procedural delays and complexity of the process have been other causes for low patents in India, the Survey said. To contextualise such delays, the Economic Survey said that the average pendency for final decision in acquiring patents in India is 42 months as of 2020, much higher than 20.8, 20, 15.8 and 15 months, respectively, for the US, China, Korea and Japan. It has however improved from 64 months in 2017. 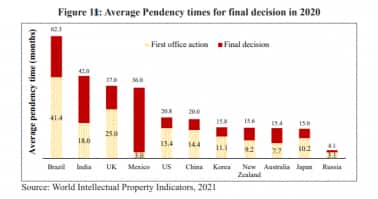 In order to reduce the time taken in the application process for patents, the prescribed time limits for the first step may be reduced to 14-15 months bringing it in line with the US and China, suggested the Survey. 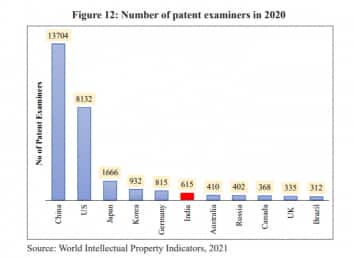 Additionally, there is no time limit specified in the statute for the controller to conduct a hearing to determine whether the applicant's responses to the FER and any outstanding objections have been adequately addressed. According to the findings, this usually takes six to nine months.

With the focus of most start-ups in the IT and knowledge-based sector, intellectual property, specifically patents that are key to this knowledge-based economy, have seen a spike. There has been a gradual increase in the filing and granting of patents in India due to an overall boom in the start-up industry.