2021: From Zepto to Mensa Brands, here are the startups that raised big money in first round of funding

Startups typically raise $10-20 million in their first institutional rounds but some bucked the trend this year to raise much more in their Series A rounds of funding.

For example, online grocery firm Zepto founded by two 19-year-olds managed to attract massive investor interest. And so did Ananth Narayanan's Mensa Brands that runs a model similar to the US-based Thrasio under which it buys profitable, well-reviewed online sellers on ecommerce marketplaces and turbocharges their growth with technology, marketing and product growth chops.

Here's a list of the firms that raised big capital in their first institutional or Series A rounds.

1. Zepto: The online grocery delivery firm turned heads not just for raising a massive $60 million in its first institutional round but also for being founded by two 19-year-old Stanford dropouts. The round was led by US -based investment fund Glade Brook Capital in November. The next month the firm raised another $100 million which took its valuation to $570 million. The company offers 10-minutes delivery and is focusing on expanding its business across the country. Now it is also learnt to be in talks with investors for a potential unicorn round.

2. Mensa Brands: Founded by former Myntra CEO Ananth Narayanan, Mensa raised $50 million in a Series A round in May from Accel, Falcon Edge Capital and Norwest Venture Partners. Within six months of this, it raised another $135 million round to become one of the country's fastest firms to turn unicorn.

3. 10Club: Another Thrasio-like startup which raised a huge Series A round in June. The company that acquires young ecommerce product sellers to scale them up raised $40 million in an equity and debt round led by Fireside Ventures. 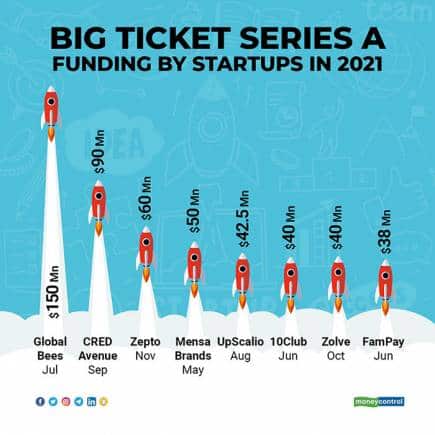 4. GlobalBees: This Thrasio-style venture raised $150 million in a mix of equity and debt in July in one of the largest Series A rounds raised by an Indian startup so far. The round was led by FirstCry. The company is in the business of acquiring fast-growing online brands to build an assortment of products. At the same time it helps these brands scale up by making investments.

5. UpScalio: In August, this Thrasio-style company raised $42.5 million in its Series A round led by Presight Capital. Heliad Equity Partners, MPGI, 468 Capital and Whiteboard Capital also participated in the round.

6. CredAvenue: The fintech startup raised $90 million in a Series A funding round in September from Sequoia Capital Lightspeed Venture Partners, TVS Capital Funds and Lightrock India. The company is building infrastructure to power debt markets and offers solutions for discovery and execution across a wide range of products.

7. FamPay: The fintech startup raised $38 million as part of its Series A funding in June led by Elevation Capital. The company targets teenagers and provides them financial literacy. It makes it convenient for teenagers to make online and offline payments through its app and card. While it requires the teens to have their parents' consent, they do not need to set up a bank account to start making payments.

8. Zolve: Started by TaxiForSure founder Raghunandan G, the neobank raised $40 million in a Series A round of funding in October led by partners of DST Global. It also saw participation by Tiger Global, Alkeon Capital, and others. The firm offers cross-border solutions to students and working professionals moving to the United States. On the basis of their home country credit score, Zolve provides immigrants — working professionals and students bound for the US — access to FDIC-insured bank accounts, high-limit credit cards, and debit cards.