Reliance Retail's target is to open more than 6,000 outlets pan-India with a top-line potential of roughly $20 billion by FY20-end.

In the quarter gone by, Reliance Industries reported a mixed performance at the consolidated level. While the refining and upstream oil & gas segments bore the brunt of rising crude prices, petrochemicals registered healthy top-line growth and margin improvement. However, what stole the show was the momentum observed in the retail (Reliance Retail) and telecommunication (Reliance Jio) divisions.

Mukesh Ambani, in his address to Reliance Industries' shareholders in the FY18 annual report, set his vision to ensure that the revenue contribution of these consumer-centric segments is on par with the non-consumer ones (refining, upstream oil and gas, petrochemicals) over the next decade. Consequently, a major shift in the conglomerate’s long-term strategy, which is aimed at tapping markets and consumers across the country, is worth taking note of.

Since B2C segments are steady in nature and also happen to be less volatile to economic/global/commodity uncertainties in comparison to the B2B segments, prospects of revenue and earnings visibility are likely to be better.

Furthermore, it is pertinent to understand the synergies that Reliance Industries could derive by integrating the customer base of Reliance Retail and Reliance Jio. For instance, a Jio user can get good deals on purchasing products from the online platforms or brick-and-mortar stores of Reliance Retail, whereas Reliance Retail can leverage its deep pan-India presence to increase the number of Jio subscriptions through various offers.

While Jio’s entry in 2016 changed the landscape and dynamics of India’s telecom industry dramatically and structurally, Reliance Retail could possibly do the same on the retailing front. So, what’s in store for the retail mammoth in times to come? 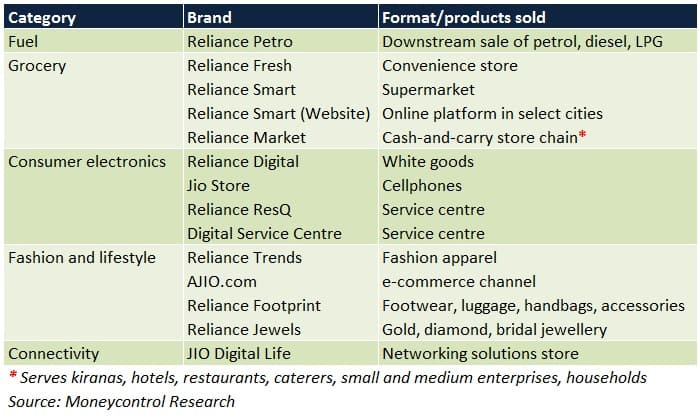 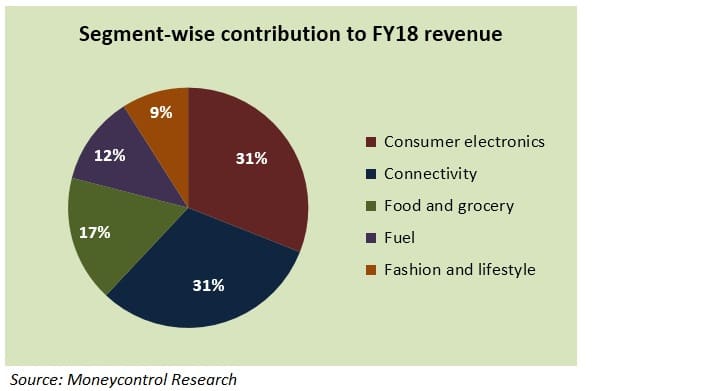 Accelerated store additions and healthy demand across all consumption brackets caused revenues to more than double year-on-year (YoY). Reliance Retail clocked sales of Rs 32,436 crore in Q2 as against Rs 14,646 crore in the same quarter of FY18. 138 new stores and 535 Jio Points were added during the quarter.

Margins for the quarter stood at 3.8 percent, up 155 basis points YoY, on account of operating leverage.

For Reliance Retail, most of the incremental revenue growth in the coming fiscals will be driven by aggressive store additions across all segments (lifestyle, grocery, white goods, fuel, connectivity). Extensive use of omnichannel (i.e. a blend of online and brick-and-mortar retail) will be important in widening the market reach. Therefore, top-line traction is expected to be intact.

In the case of apparel and consumables, the share of private labels to annual turnover is likely to increase gradually too. Besides enhancing brand and product visibility, the move should aid margin accretion owing to economies of scale and lower procurement costs.

With more than 50 million customers already covered under loyalty programmes, a lot would depend on how Reliance Retail capitalises on its strengths to achieve higher conversion-to-footfall ratios. Should it succeed in this regard, the improved asset turns will have a positive rub-off on the financials.

In the case of fuel retailing, top-line growth will be volume-driven. Commissioning of new outlets, coupled with re-commissioning of existing ones, would be the factors to watch out for.

How big can Reliance Retail be?

Amid economic uncertainties at the domestic and international level, consumption theme, being the most secular in nature, has been the Street’s favourite. Unsurprisingly, valuations of most retail stocks, even after witnessing sharp corrections of late, continue to trade at elevated multiples.

In the context of Reliance Retail, this fact assumes even more importance considering its huge revenue base, large store count, growing contribution to Reliance Industries’ consolidated sales in the recent past and an ambitious plan going forward. Its target is to open more than 6,000 outlets across the nation with a top-line potential of approximately $20 billion by FY20-end. If this goal is achieved, Reliance Retail could capture roughly 5 percent of India’s fast-growing retail market.

Given Reliance Retail’s growth pace in the past, this objective seems achievable. In the last 5 years, it has been consistently expanding at the rate of more than one new store each day and footfalls at outlets have nearly doubled every 2 years. It also enjoys the first-mover advantage in many cities.

If the recent quarterly results of Reliance Retail are anything to go by, its margins could, at the very least, be in the range of 4.5 to 5 percent by the end of FY20.

Using a market cap to sales multiple of 3, we derive the value of Reliance Retail at Rs 3,73,668 crore, which is close to 56 percent of Reliance Industries' current market capitalization.

So, if Reliance Retail is able to earn better margins, its market cap to sales multiple will witness a re-rating. This could be a major game changer for Reliance Industries and drive its valuation upward.

What also sets Reliance Industries apart from the rest is its increasing focus on futuristic businesses. The company, through its wholly-owned subsidiary, acquired 12.7 percent stake in SkyTran, a high-speed public transportation (through magnetic levitation) company.

In due course, we see a lot of steam in Reliance Industries on the back of initiatives undertaken by it in synergistic domains (stake acquisitions in Den Networks and Hathway), consumer-oriented consistent growth verticals (Reliance Retail, Reliance Jio) and differentiated technologies (SkyTran). Investors should, therefore, keep a close eye on how developments pan out on the organic and inorganic fronts.