Received a tax notice related to capital gains? Here is how you should respond

Consider this: You take time off your busy work schedule to file your income-tax returns before July 31. Your burn the midnight oil to compute long-term capital gains from the sale of your equity investments – an excruciating affair this time, as Budget 2018-19 imposed a 10 per cent tax on such transactions. Yet, just when you are about to get into holiday mode, the income tax (I-T) department sends you a notice, terming your returns ‘incorrect.’

This is what happened to scores of tax-payers who received such notices in their mailbox recently. According to a report in The Economic Times, the I-T department’s systems were unable to process tax returns correctly, leading to such notices. “There is inconsistency in the LTCG (long-term capital gains) amounts/totals entered in schedule CG OR Taxpayer is claiming deductions u/s 54 which are more than the amounts allowable as per the respective sections,” says one such notice accessed by Moneycontrol.

Now, these notices, served under section 143(1)(a), require the recipients to provide an explanation or file a revised return within 30 days. “In some cases, where there is a notional capital loss, the system has calculated a capital gain, potentially leading to higher tax demand,” says Karan Batra, Founder and CEO, Chartered Club.

Responding to the IT department

The assurance notwithstanding, it helps to know the process for responding to such notices and raising a dispute. “Taxpayers must respond online to the notice received and then continue to check the status of the demand raised,” advises Gupta.

The notice can be accessed through by clicking on the e-Proceedings tab once you log in to incometaxindiaefiling.gov.in. Choose ‘Adjustment u/s 143(1)(a)’ and select ‘Submit’ response. Finally, click on disagree and elaborate on your response (see How to respond to I-T notice on LTCG tax’). ClearTax.in is advising return-filers to cite the reason in this format: ‘At the time of filing the ITR, the cost of acquisition has been considered as per the section 55(2)(ac) of the Income tax act 1961, read with FAQ issued by the CBDT on February 4, 2018. Based on this, the cost of acquisition has been computed correctly for equity-oriented mutual fund/equity share on which securities transaction tax (STT) is paid’. Submit the response to complete the process at your end.

The screen grabs below can be used to wade through the IT filing portal.

How to respond to I-T notice on LTCG tax 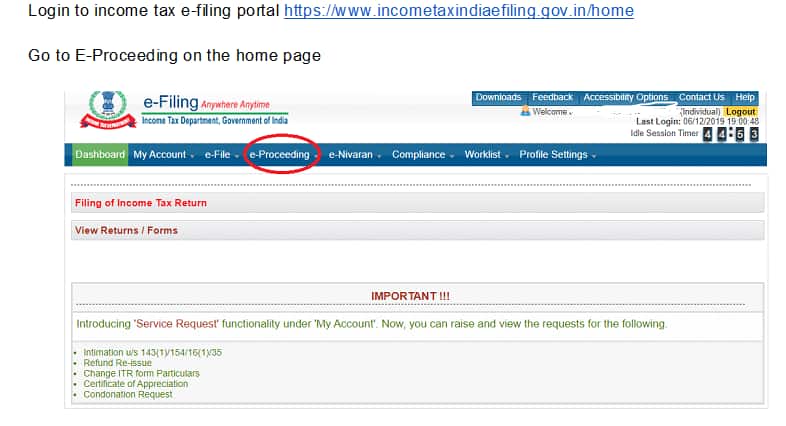