Despite a large-size, this flexi-cap fund has done well in rising and falling markets

A multi-cap fund that became a flexi-cap fund following SEBI's change of rules in 2020. But despite that, the fund remains a good investment.

Flexicap funds are allowed to have a ‘go anywhere’ investment strategy. The fund manager of such schemes has the leeway to invest across large, mid and small-cap stocks.

SEBI issued a diktat asking fund houses to make their multi-cap schemes true-to-label, mandating at least 25 percent of their assets each to be invested in large, mid and small-cap stocks. There was no such restriction earlier. Later SEBI allowed fund houses to have a new flexi-cap category with no rigid market capitalisation based investment mandate. Many schemes chose the new flexi-cap category to retain their original characteristic.

Kotak Flexicap fund (KFF) is one such scheme. With assets under management (AUM) of over Rs 34,000 crore (the highest), KFF has managed to deliver relatively higher risk-adjusted returns, consistently over the long run.

Formerly known as Kotak Standard Multi-cap, KFF has been following a diversified approach of investing in stocks across market capitalization since its launch. Harsha Upadhyaya has been managing the fund since 2013.

The differentiating factor for KFF is that it follows a top-down investment approach with concentrated sector bets. Its investment process starts with identifying sectors that can deliver returns in the coming market cycle. 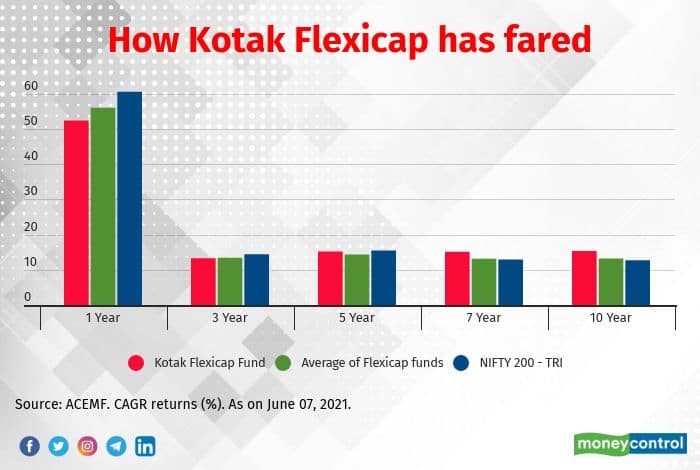 Harsha Upadhyaya, Chief Investment Officer (Equity), Kotak Mahindra AMC says, “In every economic cycle, you will see a few pockets in the economy doing better than the rest. The idea is to identify those likely outperformers in terms of sectors, and then supplement that with bottom-up opportunities. For example, you pick up, let's say, a banking sector, then within banking, the same approach starts with those that are the good ones to add to the portfolio. But in a normal fund, you may just start with a bottom-up approach of identifying stocks with no sector bias.”

This strategy has helped the fund to generate healthy returns. For instance, KFF has been overweight on cement for years and remain invested in UltraTech Cement, Ramco Cements and Shree Cements. All these companies outperformed the benchmark and contributed to the fund significantly. Chemicals is another example. Investments in the likes of SRF have paid off well. The stock has risen three-fold since the time the fun purchased it.

“It is not just the overweight calls, but the underweight calls have also worked for us,” adds Upadhyaya. We had been underweight on metals over the years until 2020, which worked well. Now, we have exposure to a couple of metal stocks. Telecom is the other sector we avoided for years, he explains. 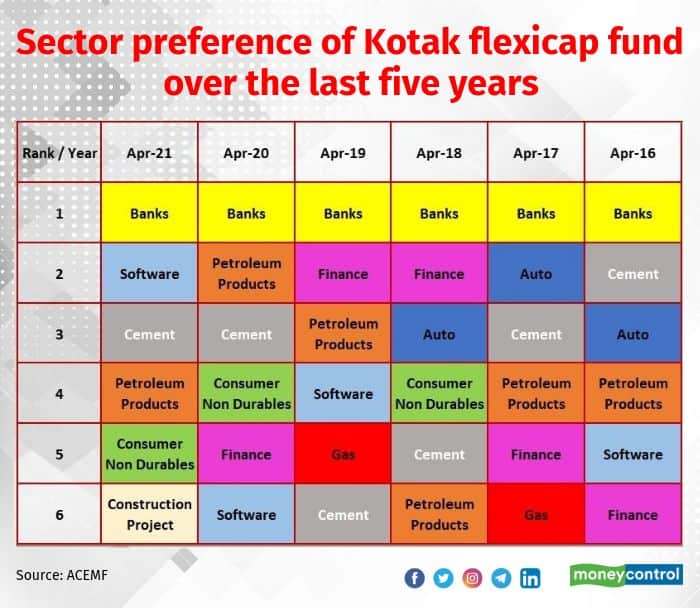 Though the scheme’s mandate allows it to bet on select sectors, its segment preferences are fairly well-spread. Its top five holdings - banking, software, cement, petroleum products and consumer non-durables - account for about 60 percent of the portfolio (as of April 2021).

Upadhyaya says he prefers to buy and hold for the long term. True to this philosophy, more than half of the stocks or about 65 percent of the portfolio have been held over the last five years.

Though it belongs to the flexi-cap category, at least two-thirds of its portfolio has always been invested in large-cap stocks. The rest are invested in mid and small-cap stocks.

KFF has shown better performance not only in market rallies but also in market downturns (see chart). Over the last decade, the fund managed to be a part of the top two quartiles in most of the equity market cycles (nine out of 11 years).

Kotak Flexicap ranked in top two quartiles in most of the timeframes over the last 10 years:

However, KFF registered tepid performance over the last one year. Rolling returns are a better way to assess a fund’s performance as they cover multiple entry and exit points. The five-year rolling returns, calculated from the last seven years’ NAV history shows that KFF gave 11.3 percent returns, as opposed to the flexi-cap category average return of 8.7 percent. The benchmark Nifty 200 TRI gave 9.3 percent returns in the same period.

Rushabh Desai, a Mumbai-based mutual funds distributor says, “The fund manager of a flexi-cap fund has complete control to shift the underlying allocation among large, mid and small-cap stocks based on her expertise and foresight. This clearly gives these funds an edge and flexibility to generate optimum long-term returns in different market cap cycles. KFF has shown its resilience, especially in falling markets, which in turn made the fund less volatile.”

Investors can consider the scheme for their core portfolio, taking into account the fund’s long-term track record of steady performance and ability to contain losses in market downturns. The minimum time horizon for holding should be five years.