Aside from ICICI Prudential and Nippon, most multi-cap schemes that remained multi-cap were small in size. As many as 25 schemes moved to the new flexi-cap segment after SEBI's investment guidelines last year

In 2020, the Securities and Exchange Board of India (SEBI) issued a diktat asking fund houses to make their multi-cap schemes true-to-label. They were asked to invest at least 25 percent of their assets each in large, mid and small-cap stocks. There was no such restriction earlier. Later SEBI allowed fund houses to have a new flexi-cap category with no rigid market capitalisation based investment mandate.

Of a total of 35 schemes originally in the category, 25 became flexi-cap funds. The remaining 10 schemes continued to be multi-cap funds.

Who shifted and who remained?

Given that a significant chunk of the assets of multi-cap funds was invested in large-cap stocks (close to 80 percent), most of the large-sized schemes converted to being flexi-cap funds. At the moment, the assets under management of flexi-cap funds is Rs 1.6 lakh crore. 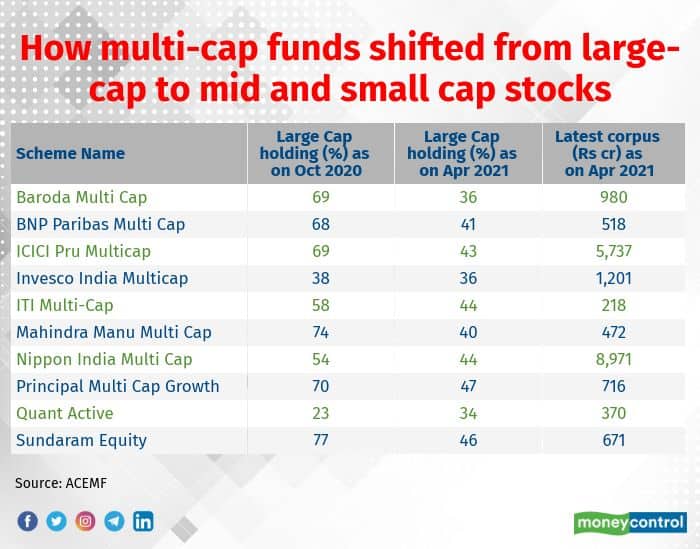 But given the small portion (of the rest of the schemes) of stocks these funds needed to liquidate and reinvest, the transition appeared to have been easier.

Nippon India Multi-cap had to liquidate only around Rs 600 crore from its large-cap holding and deploy Rs 150 crore and Rs 447 crore into mid and small-cap stocks, respectively. The scheme already held a significant portion in mid (23 percent) and small cap stocks (19 percent).

Sailesh Raj Bhan, Deputy CIO Nippon India Mutual Fund says, “Our fund has been managed as a true multi-cap scheme for the last 10-15 years. We were always in the range of 40-60 percent in large-caps and the remaining in mid and small-cap stocks, depending on the market condition. So, the transition was comfortable.”

Chintan Haria, Head-Product Development & Strategy, ICICI Prudential AMC says, “we were very easily able to manoeuvre because there certain elements of mid and small-caps already there in the fund.”

Though fund houses had time till February 2021 to rebalance their portfolios, most shifted their holdings by November 2020. The only problem: valuations in small and mid-cap funds were already high by then. “But there were enough mid-caps and small-caps available at reasonable valuations relative to the quality mega-caps.” adds Haria of ICICI Prudential AMC. An analysis of multi-cap funds’ portfolios shows that funds added midcap stocks such as Polycab India, United Breweries, Persistent Systems and Federal Bank as part of their rebalancing. In the small-cap space, they added stocks JM Financial, Indoco Remedies and Inox Leisure among others.

One side-effect of portfolio rebalancing was that the number of stocks in many portfolios increased. Haria explains that an increase in allocation towards small-sized companies entails that schemes ideally would not invest more than 1 percent in each such stock. Raj Bhan feels the number of stocks in multi-cap funds is still reasonable, considering that the Nifty 500 Multi-cap 50:25:25 index – the benchmark used by most multi-cap funds now – has 500 stocks.

Should you invest in the new avatar? 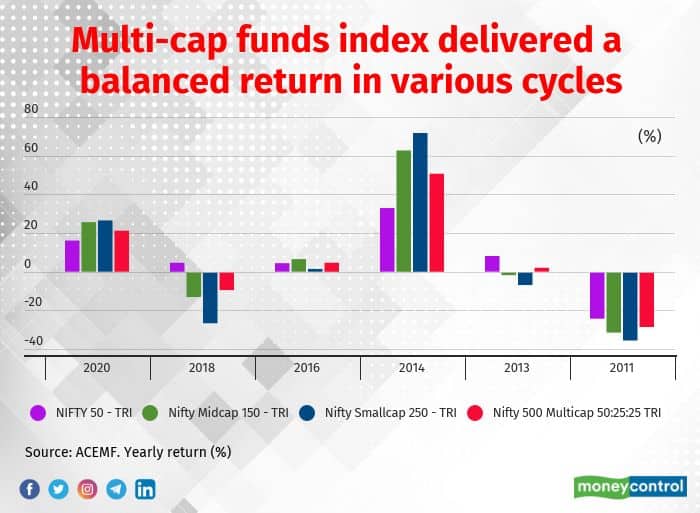 SEBI’s guidelines on multi-cap funds have ensured that these schemes are now true-to-label. If you wish to invest in an equity fund that deploys assets meaningfully across large, mid and small-sized companies, then multi-cap funds should ideally be in your portfolio. How the schemes perform over the long run under the new SEBI-prescribed limits remains to be seen.