UPCOMING EVENT:Special webinar on Highlights of global investing in 2021 and what lies ahead' at 2 pm on 21st January, 2022. Register Now!
you are here: HomeNewsBusinessMutual Funds

Top 20 stocks that were on fund managers' buying list in March: Do you own any?

Investors pumped in a record Rs 3.43 lakh crore in mutual funds (MFs) in 2016-17, mainly into income and liquid schemes.

Mutual Funds were net buyers of equities in 21 trading session worth Rs 2,368 crore, as against net buying of Rs 1,850 crore in February 2017; however, the asset under management (AUM) dipped slightly. 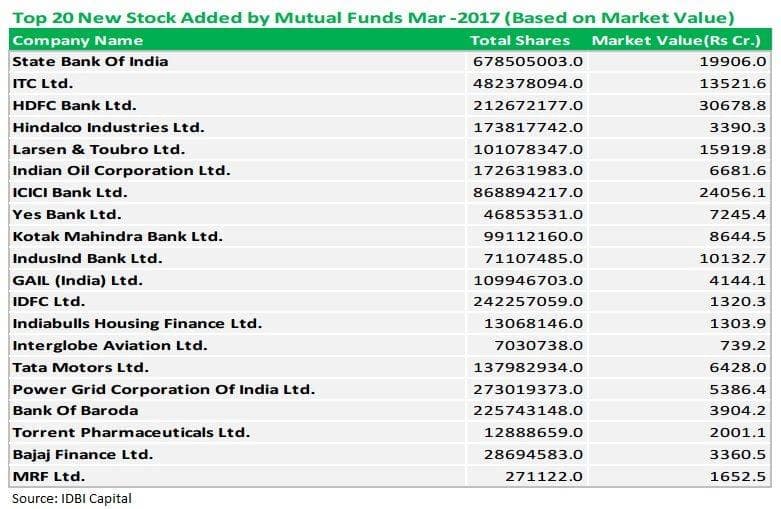 The bulls run witnessed in the Indian market has taken everyone by surprise but retail investors will not let this opportunity go this time around. The systematic investment plan (SIP) has made the job easier for investors who are willing to jump into equity markets.

Some experts say that the trend has just started as we are in the middle of SIP revolution. As the attractiveness of other asset classes such as gold, real estate, fixed deposits fade more and more money will be pumped into equity markets via MFs.

"We are in the middle of a SIP revolution, Equity is the most attractive asset class and there will be big inflow from retail investors," Porinju Veliyath, MD & Portfolio Manager, at Equity Intelligence India told Moneycontrol.com.
"USD 100 bn is not a big amount it's just 5% of our GDP, less than a third of the planned spending in infrastructure by the government. We have been accustomed to thinking small, but now is the time to think big and make it large," he said.
Tags: #gold ETFs #MF Analysis #Mutual Funds #Nifty #Porinju V Veliyath
first published: Apr 17, 2017 10:02 am