Tata Sponge has been able to capitalise on this trend thanks to the support from Tata Steel, parent company, for the supply of iron ore and its proximity to iron ore belt and ports.

In an industry, where most players are operating at about 50-55 percent capacity utilisations, companies like Tata Sponge stand out with almost 110 percent capacity utilisation. While addressing analysts conference call, management highlighted the industry is going through difficulties as a result of low availability of the iron ore and higher coal prices leading to overall very low level of production. This comes at a time when sponge iron, used in making steel, is in higher demand as a result of robust prospects of the steel industry.

Tata Sponge has been able to capitalise on this trend  thanks to the support from Tata Steel, parent company, for the supply of iron ore and its proximity to iron ore belt and ports.

Higher demand and better pricing environment is helping the company to report good sales growth. During the quarter ended December 2017, company reported realisations of close to Rs 17,300 per tonne leading to strong 50.3 percent increase in sales to Rs 215 crore.

The benefits of operating leverage and the fact that the company was able to pass on the hike in raw material prices led to strong growth in earnings. During the quarter ended December 2017, the company reported strong 22 percent operating margins as against 8 percent in the year-ago quarter.

In fact, there was a three-fold increase in profit to Rs 36 crore as against 11 crore last year despite hike in raw material prices. During the quarter the company’s coal cost increased to Rs 8,198 per tonne as against Rs 6,757 per tonne in the year ago period. Similarly, iron ore prices also moved up marginally from Rs 2,196 per tonne to Rs 2,257 per tonne. 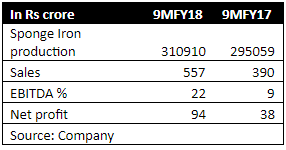 Currently sponge iron prices are trading at about Rs 20,000 per tonne and management believes it will remain firm given the demand-supply situation. This is also a reason for earnings growth to remain strong over the next two quarters with good cash flow generation.

Beyond that, considering the company is operating at full capacity, there is not much leeway to improve profits other than improvement in realisations, till the time new capacities are added.

As of now, the company is still evaluating its 1.5 million tonne steel capacity addition plans, as a part of forward integration. The management said it will take about 2.5 years from the time the company gets environment clearances. Meanwhile, the company is also contemplating participation in government’s upcoming auction of iron ore mines, which could be positive and help in utilising the cash in the books.

Investors got to bear in mind that the company is sitting on a cash equivalent of close to Rs 800 crore, which is about 46 percent of its current market capitalisation, and there is strong free cash flow from operations, which will act as shield and support valuations. On the basis of earnings, at current market price of Rs 1,130 it is trading at 13 times its FY18 estimated earnings, which is quite reasonable in the light of cash in the books, return ratios, zero debt and upcycle in the steel industry.
Jitendra Kumar Gupta
Tags: #Companies #Moneycontrol Research #Result Analysis #Tata Sponge #Tata Steel
first published: Jan 19, 2018 03:24 pm