ICICI Securities (I-Sec) reported a muted Q3 FY19 performance, with topline and net profit declining 18 percent and 35 percent year-on year, respectively, due to fall in revenue from all three main business streams: broking, distribution and corporate finance. Performance was impacted by intense competition in the broking business and a lacklustre equity market with a weakening outlook. Couple of adverse regulatory changes further added to the woes. For instance, Supreme Court barring private entities from saving or using Aadhaar card details impacted the pace of new digital client acquisition in the quarter under review.

It is heartening to see that non-broking business revenue stood at 43 percent of total revenue during Q3. I-Sec has been attempting to diversify its revenue stream in order to reduce dependence on capital market revenues, which are inherently volatile in nature. It is encouraging to see the company’s increased presence in distribution business as a second largest distributor of mutual funds among non-banks. Distribution revenues are linked to assets under management (AUM) and hence they impart stability to its overall earning profile.

Key negatives
Despite increase in markets volumes or ADTO, broking revenue decreased 17 percent as the brokerage yield (brokerage income/ADTO) collapsed in Q3 FY19. This was mainly because of decrease in equity delivery volume.

Supported by the upswing in the capital market, I-Sec’s total equity broking volume had grown sizably during FY18, outperforming industry growth, thus resulting in an improvement in company’s market share. In Q3, broking volume grew marginally lower as compared to the industry, which led to a moderation in the market share to 8 percent (Q2 FY19: 8.6%).

Though average mutual fund assets under the distribution business increased 7 percent in Q3, distribution revenue declined 11 percent YoY. This was due to adverse impact of Securities & Exchange Board of India's (SEBI) regulation to cap total expense ratio (TER) which resulted in cutting distributors’ commissions by mutual fund houses. Also, SEBI disallowing payment of upfront commission to the distributor of mutual funds impacted revenue.

SEBI’s order to cap total expense ratio as most AMCs are likely to cut distributors’ commissions.

Revenue from corporate advisory, which houses the investment banking business, fell 37 percent due to lesser issuances in the primary market.

Other observations
With online stock trading startup Zerodha racing ahead of I-Sec, with the highest number of retail clients (as per NSE data) as at December-end, the latter's ability to sustain market share and profitability in the broking business is a key factor to watch out for. Additionally, the trend in distribution assets, especially from retail clients, as we move closer to national elections remains a key monitorable.

The management said it aims to achieve a cost-to-income ratio of 50 percent (currently 57 percent) by FY22. This was slightly disappointing as it indicates that the company is struggling to reduce cost in line with revenue reduction.

Due to SEBI’s capping of TER and ban on upfront commissions, management said its FY20 mutual fund revenue will decline 25-30 percent as compared to FY18. 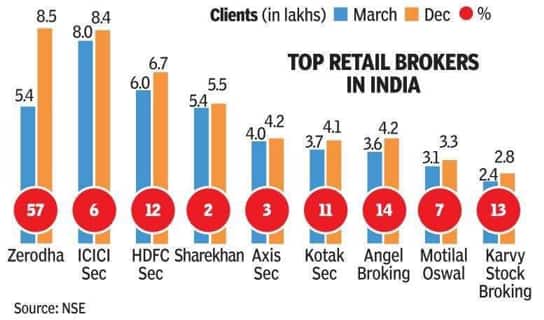 Outlook
With increasing competition in equity broking and advent of discounts from brokerage houses, average yields for broking players have been falling. With competitive intensity in the industry expected to remain high, the pressure on I-Sec’s broking yield is expected to continue. Distribution revenue will be weighed down by the recent regulatory changes.

The stock has corrected almost 40 percent from its 52-week high. As such, valuations have turned reasonable with the stock trading at 15 times FY20 estimated earnings. However, we do not see any upside triggers for the stock in the near term.

That said, we see favourable macro factors (like increasing share of financial savings, rising equity market capitalisation, etc) supporting the capital market businesses in the long run and believe I-Sec is well positioned to benefit from such a long-term trend. Investors wanting to play the capital market story can buy the stock on dips for the long term.