How does Zomato listing stack up with global food delivery peers?

Zomato is easily the most expensively valued stock in this set of companies when using the price to sales yardstick.

Food delivery company Zomato’s much-hyped initial public offer lived up to expectations, at least on the first day of listing. The stock made a stellar debut on the bourses, opening at Rs 116 on the NSE, a 52.63 percent premium to its final offer price of Rs 76. It closed the day at Rs 126 which translates into an opening day pop of 66 percent.

This could be interpreted as a sign that investors are confident about the company’s prospects even if it has not made many profits in the last five financial years, per its draft red herring prospectus. Some pundits are quick to see this as an augury of public investors welcoming start-up initial public offers, of which a long line is expected with the likes of Nykaa, Paytm, Policybazaar, and so on eyeing a listing.

How does Zomato’s opening day performance stack up with other listed food delivery companies around the world?

DoorDash, which was listed in December 2020, surged 80 percent, the one in the set of companies we studied that did better than the Indian company. Others such as Meituan and Deliveroo did far worse. On July 23, 2021, since listing day, Doordash and Deliveroo fell 3 percent and 15 percent, respectively, while Meituan gained a whopping 300 percent listed in September 2018.

In market cap comparison, Zomato is smaller than the global peers we studied. The market leader, China's Meituan has a market cap of $216.02 billion, some 16 times Zomato’s market value of $13.44 billion at current exchange rates. Of course, one has to remember that Meituan is an investment holding company, which also operates in other segments such as travel. 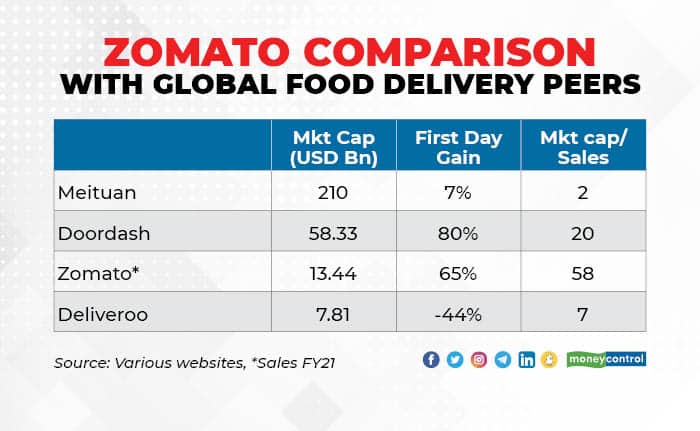 That said, Zomato is easily the most expensively valued stock in this set when using the price to sales yardstick. It has a market cap to sales ratio of 58 times compared to 20 times for Doordash and 6.56 times for Deliveroo. A higher ratio means that the market is willing to pay for each dollar of annual sales.

However, as valuation guru Aswath Damodaran pointed out in his blog today, it is perilous to use just this yardstick for determining the pricing.

“If you are a Zomato bull, you could point to the EV/User and argue that it is cheap, relative to Doordash, whereas if you are a bear, you can point to Current revenue and GOV multiples, to make the case that Doordash is cheaper,” he wrote. EV is enterprise value, GOV is gross order value.