We expect mild pullback on Nifty, Sensex ahead of Budget: Navneet Daga of YES Securities

From a near-term perspective trimming leverage longs, using rallies to short until Nifty sustains above 14650 mark. For options players, using ratio spread would likely to be profitable strategies, says Daga.

Q) Nifty surged to fresh record highs but we got a hint of profit-taking as the index inched closer towards 15000 while for the Sensex it was 50,000. How do you sum up last week’s action?

A) The index has started to show some signs of fatigue near the 14,600 to 14650 mark, and with short-term catalyst changing and hinting serious profit booking, we expect the index to retrace back towards the 14,200 mark and then resume its journey back on the upside.

Highlights for last week trading were a) India VIX rallying from ~20 mark to ~24 levels however major price action was missing, expected to see large whipsaw going forward, b) During the week FII’s were seen liquidating index futures long positions at higher levels ~35k contracts net shed as now rallies are used to trim positions, c) Global setup was also hinting at volatility as US 10-yr bond making comeback from 0.9x t 1.15x along with a rebound in dollar index making case for volatility going ahead. 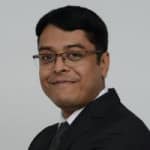 So from a near-term perspective trimming leverage longs, using rallies to short until Nifty sustains above 14650 mark. For options players, using ratio spread would likely to be profitable strategies.

Q). We are just two weeks away from Budget 2021 – any pre-Budget picks which investors can look at and why?

A) In the run-up to the budget we expect volatility to make a comeback after a steep rally seen from 11500 to 14500 levels in a matter of months.

The market is going with a lot of expectations from the budget event and also with significant gains. Traders/investors should be prepared for volatility.

Banking & Auto stocks are still making the case for a further run-up as fresh breakouts were seen on BankNifty above 32k mark along with huge carry forward of long positions on select auto stocks.

We remain cautious on metals stock after a stellar rally seen in the past few weeks.

Q) How is markets likely to pan out in the coming week – any important levels which one can track? Also, can Sensex/Nifty hit 50,000/15000 respectively ahead of the event?

A) Well, we expect mild pullback on Nifty/Sensex going ahead of the Budget event, and post that the budget rally could resume on the upside.

The intermediate levels to watch on Nifty should be 14,200 levels on the downside while the supply zone is visible near 14,700 levels.

Before the Budget, 15k mark on the Nifty looks a bit stretched given the backlog of large gains seen in the previous two months.

Q) Small & midcaps witnessed some profit-taking in the week gone by. Can this accelerate as we move closer to the event?

A) The Nifty Midcap index has been on a tearing run since the start of November 2020. On the Standalone P&F chart (0.25*3%), the pattern of bullish anchor columns and bullish follow-through is seen, implying strong momentum.

The fall of 21st December (i.e. the tall red bar) could not provide much of the follow-on damage. A similar structure has been seen in the Nifty Smallcap 100 index too.

Our customized breadth of the Nifty Midcap 100 index has seen a decline from the overbought zone and currently quoting at the neutral zone. In an up-trending market, breadth tends to bounce back if it is not accompanied by persistent price decline.

The Nifty leadership was driven by HDFC Ltd in the past 2 months. The stock broke above its multi-year highs (2500+), and we expect the stock to trade with a positive bias going in the budget event with a focus on housing, and infrastructure.

On the weekly chart, REC had formed a big Tall Red bar last year in the last week of Feb 2020, before embarking upon a big move on the downside.

Thereafter, a phase of consolidation between April & June was seen. REC picked up momentum eventually in the third week of October 2020.

In the last week, it attempted a break above Feb’s 2020 big tall red bar. Sustenance above Rs145 would result in the resumption of an uptrend towards a move of Rs169 with a Stop Loss of Rs135.

Forming a series of ascending peaks the stock gradually moving higher. However, the recent rally failed to surpass Oct’20 peak which eventually triggered some profit-taking.