Trade Spotlight | What should you do with MCX India, Adani Total Gas, JSW Energy on Wednesday?

JSW Energy has been correcting along with the broader market since the month of October. The stock has been forming a 'Lower Top lower Bottom’ formation on the daily chart and hence seems to be retracing its previous uptrend.

The market posted nearly 2 percent gain on June 21 as short-covering and long build-up in beaten down stocks and positive global cues lifted sentiment. The BSE Sensex climbed more than 900 points to 52,532 and the Nifty50 jumped nearly 290 points to 15,639 as breadth was strong.

The broader markets also joined the bull run as the Nifty Midcap 100 and Smallcap 100 indices rallied around 3.5 percent each. More than five shares advanced for every declining share on the NSE.

Here's what Ruchit Jain of 5paise.com, recommends investors should do with these stocks when the market resumes trading today:

In last three months, the stock has been consolidating in a broad range of Rs 1,140-1,500. The entire consolidation has been seen below its 200-day exponential moving average (EMA) which indicates a negative trend.

However, within this broad consolidation the stock prices were trading near the support range and a pullback move in the broader markets led to an up move in the stock from its support.

In the near term, the prices could approach the higher end of the range where resistances are seen around Rs 1,400 and Rs 1,500.

Traders should use such pullback moves to lighten up longs and wait for a resumption of its uptrend for fresh entry. The immediate support is placed around Rs 1,140 below which, the stock would then resume its downtrend. 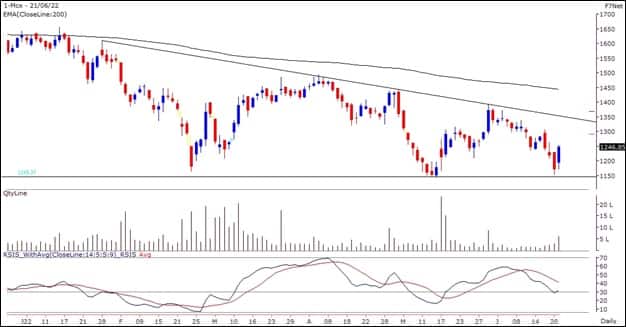 The stock witnessed some correction in last few days but as the stock approached its '200 days EMA', it witnessed buying interest which resulted in a 20 percent upmove. In recent past as well, the '20 days EMA' had acted as a support and prices had resumed the positive trend.

Thus, this support which is placed around Rs 1,900 is a sacrosanct and the broader trend remains positive till this is intact. However, the ‘RSI Smoothed’ oscillator on the monthly charts is in an overbought zone and hence, a time-wise correction could not be ruled out where prices would consolidate in a broad range.

Traders with existing positions can keep a stop-loss below the above mentioned support. On upside, the resistances are seen around Rs 2,625 and Rs 2,740. The stock has been correcting along with the broader market since the month of October. The stock has been forming a 'Lower Top lower Bottom’ formation on the daily chart and hence seems to be retracing its previous uptrend.

But the momentum readings are in the oversold zone and hence, near term pullback could be seen. The stock can see an up move towards its resistances of Rs 235 and Rs 250 in the near term.

On the flipside, the immediate support is placed in the range of Rs 185-175. Disclaimer: The views and investment tips expressed by investment experts on Moneycontrol.com are their own and not those of the website or its management. Moneycontrol.com advises users to check with certified experts before taking any investment decisions.
Sunil Shankar Matkar
Tags: #Adani Total Gas #JSW Energy #Market Edge #MCX India #Nifty #Sensex #Stocks Views #Technicals #Trade Spotlight
first published: Jun 22, 2022 06:36 am