Trade Spotlight | What should you do with DLF, Birla Cable, Firstsource, Orient Bell, Bal Pharma?

Birla Cable has consolidated from August 2021 till January 2022. Recently the counter has a clean weekly breakout on triangle pattern with moving average convergence divergence (MACD) giving positive crossover above zero which is indicating that the stock is ready for up move.

The selling pressure in late trade dragged the market lower for the sixth consecutive session amid geopolitical tensions between Ukraine and Russia, and rising oil prices on February 23. The market lost more than 150 points on the Nifty50 from the day's high and finally settled 29 points down at 17,063, while the BSE Sensex shed 69 points to 57,232.

But the broader markets reversed some of the previous day's losses amid short covering and value buying. The Nifty Midcap 100 index gained 0.6 percent and Smallcap 100 index rose 1.2 percent.

Stocks that were in action include DLF and Firstsource Solutions which were the second and third biggest gainer in the futures and options segment, rising 6.1 percent to Rs 344.2, and climbing 4.7 percent to Rs 127.3 respectively. These stocks had corrected 13 percent and 14 percent in previous five straight sessions before Wednesday's rally.

DLF has corrected 22 percent approximately from its previous high of Rs 409.75 since last 3 weeks or so and currently placed below its 200-day exponential moving average (DEMA) on daily chart.

At the current juncture DLF has reversed from bullish WOLFE WAVE sweet zone of Rs 330. On the daily chart, 14-day period relative strength index (RSI) is displaying an impulsive behaviour.

In the last trading session, the stock gained momentum with volumes picking up. So, from the investor perspective, one should add at current levels with upside potential of Rs 390-400 and credible support is seen at Rs 315-320.

Birla Cable has consolidated from August 2021 till January 2022. Recently the counter has a clean weekly breakout on triangle pattern with moving average convergence divergence (MACD) giving positive crossover above zero which is indicating that the stock is ready for up move.

Though, one can buy in small tranche at current levels and another tranche around Rs 120-122 levels with target of Rs 180 with plausible support seen at Rs 110.

Firstsource Solutions appears to be making lower highs and lower lows since October 2021. At current scenario, the stock has formed bullish AB=CD Pattern with potential reversal zone of Rs 115-120 which is also falling near 0.618 golden ratio of previous rally which got terminated on July 2021.

Looks like counter is ready for up move. Therefore, from investor perspective one should add at current levels in small quantity and wait for some dip till Rs 115. Upside is expected till Rs 175 and solid support is seen at Rs 100.

Since January 2022, Bal Pharma has corrected almost 32 percent approximately from its top of Rs 148.85. Previously stock took support around Rs 105 levels and we saw rally towards Rs 148 approximately.

In last trading session, it has taken support at potential reversal zone of bullish GARTLEY i.e. Rs 105 along with 14 period daily RSI displaying impulsive behaviour which is indicating that counter is bottoming out.

So from investor's perspective one can buy between Rs 112-120 with target of Rs 150 with plausible support seen at Rs 100.

Though counter has made all-time high in recent past but Orient Bell is currently trading at extreme ratio of harmonic arsenal i.e. 1.9 and 2 of its previous top of Rs 429 on July 2021. Also counter is way above flattish 200 DEMA which is indicating that Orient Bell can witness profit booking at any time.

Also volume is very high at extreme price levels which is sign of exhaustion. So from investor perspective one should avoid this counter. 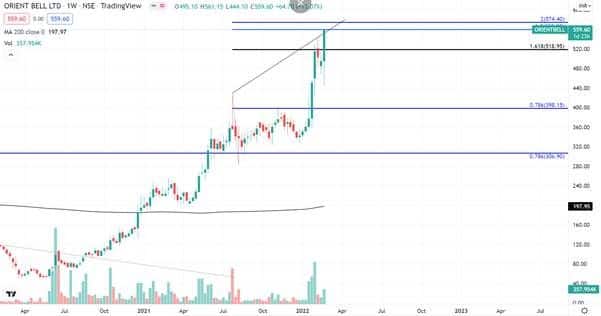