On mid term charts, IRB Infrastructure is moving in an uptrend since March 2020. The stock has seen expansion in volumes with every price rise indicating participation in the counter. The stock has formed a CIP formation (Change in Polarity) at Rs 190 level and the stock is currently bouncing off the same levels.

The market finally snapped a six-day losing streak and closed with four-tenth of a percent gains amid volatility on May 16, supported by banking and financial services, auto, and select metal stocks.

The BSE Sensex gained 180 points to close at 52,974. The Nifty50 opened strong and lost all its gains in afternoon, but immediately recouped losses and closed with 60 points gains at 15,842.

The broader markets outperformed the frontline indices for the second consecutive session with the Nifty Midcap 100 and Smallcap 100 indices climbing more than one percent each.

But the volatility stayed higher, which is a cause for concern. Experts say bulls are expected to remain uncomfortable till the easing of volatility. India VIX, the fear index rose 4.43 percent to 24.53 levels.

Stocks that were in action included Balkrishna Industries and Bandhan Bank which were the second and fourth biggest gainers in the futures and options segment, rising 8.6 percent to Rs 2,050.5, and 6.6 percent to Rs 338.5.

Post the recent correction, Balkrishna Industries showed strong upmove in prices backed with increase in volumes indicating a strong reversal in the counter.

The stock formed a long bull candle and closed above the previous week high. The RSI (relative strength index) indicator has sharply from the lower levels and managed to cross above the 50 mark.

Rs 1,970 level on the downside would act as a support for the stock. 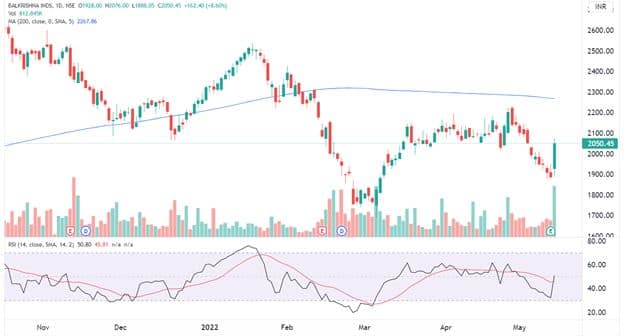 For past 1 year, Bandhan Bank has been consolidating in a range and facing resistance near Rs 350 mark. In past 3 days, the stock has seen the momentum picking up as it bounced off after taking support at the 200 days SMA (simple moving average Rs 297) with good volume build-up.

The RSI indicator has crossed the 60 mark indicating bullish undertone.

We expect the stock to test Rs 350 resistance level, and a breakout above which the stock can move higher towards Rs 372 followed by Rs 390 level. Rs 320-325 level on the downside would act as a support for the counter. 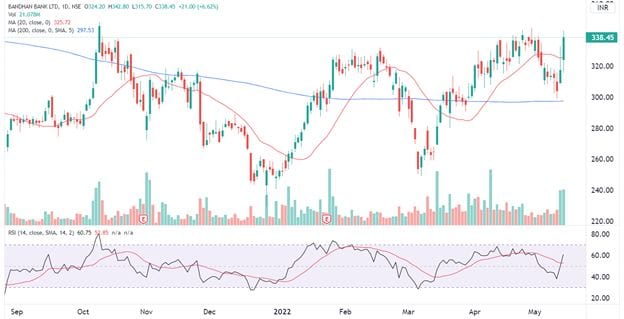 On mid term charts, IRB Infrastructure is moving in an uptrend since March 2020. The stock has seen expansion in volumes with every price rise indicating participation in the counter.

The stock has formed a CIP formation (Change in Polarity) at Rs 190 level and the stock is currently bouncing off the same levels.

The RSI indicator on weekly is moving higher after forming a bullish hinge near the 40 mark.

Traders and investors can continue holding the stock and expect upside towards Rs 240 followed by Rs 265 levels. Rs 190 level would as a major support on the downside.

On long term charts, Infibeam is moving in a strong downtrend with lower highs and lows formation. On higher timeframe charts, the stock had given a rounding top breakdown and currently the stock is placed below the key moving averages (20, 50, 200 days moving averages).

In the past 3 days, the stock has bounced sharply from the oversold territory as the RSI inchies towards the 40 mark.

We advise traders and investors to use the bounce towards 16.50-17 levels to exit from the stock. On the downside, a stop loss of Rs 14.70 should be maintained on daily closing basis.

Disclaimer: The views and investment tips expressed by investment experts on Moneycontrol.com are their own and not those of the website or its management. Moneycontrol.com advises users to check with certified experts before taking any investment decisions.
Sunil Shankar Matkar
Tags: #Balkrishna Industries #Bandhan Bank #Infibeam Avenues #IRB Infrastructure Developers #Market Edge #Stocks Views #Technicals #Trade Spotlight
first published: May 17, 2022 07:02 am