The Indian market experienced a correction in the week gone by as the Nifty closed in the red in four of the five trading sessions for the week ended December 6.

Small and mid-cap stocks suffered more than the benchmarks. The S&P BSE Sensex fell 0.85 percent while Nifty was down by 1.1 percent compared to the 2.76 percent fall seen in the S&P BSE Mid-cap index, and the 1.6 percent drop in the S&P BSE Small-cap index for the week ended December 6.

Experts say, in the coming week, the US Fed meeting outcome and advancement in Trump's impeachment process will be the major international events while the listing of Ujjivan Small Finance Bank IPO and fundraising by Yes Bank will be some domestic factors traders can keep an eye on.

Maximum call open interest (OI) of 21.91 lakh contracts was seen at the 12,000 strike price. It will act as a crucial resistance level in the December series.

Maximum put open interest of 32.49 lakh contracts was seen at 12,000 strike price, which will act as a crucial support in the December series.

The board of ECS Biztech will meet on December 9 to consider and approve the preferential issue of shares.

The board of Jagran Prakashan will meet on December 9 to consider and approve the buyback of shares.

The board of MIC Electronics will meet on December 9 for general purpose.

IRB Infrastructure: The board approved raising Rs 1,400 crore via NCDs.

Escorts: CRISIL reaffirmed its long-term rating on the company at AA- with a stable outlook. 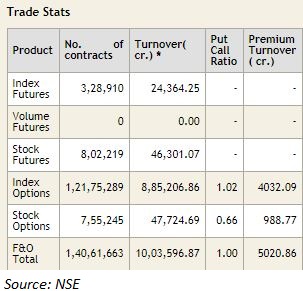 Yes Bank is under the F&O ban for December 9. Securities in the ban period under the F&O segment include companies in which the security has crossed 95 percent of the market-wide position limit.Get access to India's fastest growing financial subscriptions service Moneycontrol Pro for as little as Rs 599 for first year. Use the code "GETPRO". Moneycontrol Pro offers you all the information you need for wealth creation including actionable investment ideas, independent research and insights & analysis For more information, check out the Moneycontrol website or mobile app.