Sensex and Nifty settled with gains for the second consecutive day on May 28 amid reports of reopening of more economies and a bigger than expected stimulus plan for the European Union.

"Nifty has managed to surpass its immediate and crucial hurdle at 9,450 so it may be heading towards 9,650-9,750 levels. We feel banking and financials will continue to play a critical role. Amid all, market participants are likely to keep a watch on GDP data scheduled on May 29 while on the global front any news on US-China tussle will be on investors’ radar. Further, the on-going earning season would keep stock-specific volatility high," he said.

Maximum call OI of 64.62 lakh contracts was seen at 9,500 strike, which will act as crucial resistance in the June series.

Maximum put OI of 37.54 lakh contracts was seen at 9,000 strike, which will act as crucial support in the June series.

29 stocks saw short build-up
A decrease in open interest, along with an increase in price, mostly indicates a short-covering. Based on the OI future percentage, here are the top 10 stocks in which short build-up was seen.

Yes Bank: The bank will not be available for trading in Futures & Options segment from May 29. 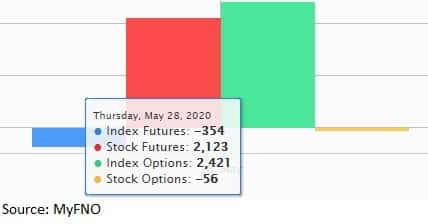