The Sensex and Nifty ended in the green for the third consecutive session on May 21 supported by gains in heavyweights such as ITC, Tata Consultancy Services (TCS), Asian Paints, Maruti Suzuki and Reliance Industries (RIL).

Market participants told Moneycontrol that if the Nifty manages to sustain above 9,150 levels, then we may see a bounce towards 9,300-9,350 zone.

Maximum call OI of 23.22 lakh contracts was seen at 9,500 strike, which will act as crucial resistance in the May series.

Maximum put OI of 32.85 lakh contracts was seen at 9,000 strike, which will act as crucial support in the May series. Automotive Axles: Offices and manufacturing have resumed at Jamshedpur and Hosur. 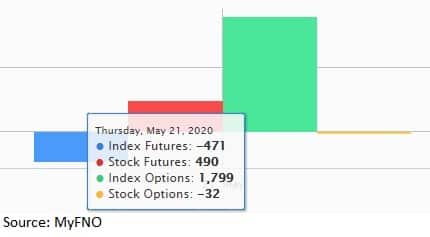 Stock under F&O ban on NSENo stock is under the F&O ban for May 22. Securities in the ban period under the F&O segment include companies in which the security has crossed 95 percent of the market-wide position limit.
Nishant Kumar
Tags: #Nifty #Sensex #Trade Setup #video
first published: May 21, 2020 08:51 pm