Traders should take one step at a time and avoid aggressive trades, as there are clusters of resistances lined up for the NIfty on the way up

The market snapped a two-week losing streak to gain around 2.65 percent in the week ended June 24, as the global mood turned positive after fears of a recession triggered by aggressive rate hikes by the US Federal Reserve eased a bit.

Short-covering and value buying was seen in most beaten down sectors. Auto, banks, financial services, FMCG, IT and pharma stocks participated in the run.

The Nifty climbed more than 400 points to 15,699, closing a tad above the previous support line, which has now turned into resistance. The index formed a bullish candle on the daily chart.

After sinking to its lowest level of 15,183 on June 17, 2022 since May 2021, the market seems to have hit a bottom and even moved to the oversold territory on sentiment indicators.

The indicators are moving upwards, with the relative strength index (RSI) showing an uptick on the weekly as well as daily charts. Even the Stochastic has given positive crossovers on the daily as well as weekly scales. The moving average convergence and divergence (MACD) indicator seems to be on the verge of positive crossover and if that happens, it can be considered a strong buy signal, technical experts said.

"Now, the Nifty has ended right around the previous support zone, which was breached recently. At times, the support broken then becomes resistance on a pullback but looking at the data, we believe the momentum has still more room on the upside," Ruchit Jain, Lead Research at 5paisa.com, said.

Jain said many stocks which saw short formations in this series and were trading around their supports saw short covering.

The banking space took the lead but sectors such as IT, metals and midcaps have short positions intact and if they see any short covering in the expiry week, it could lift the market higher, he added.

Traders, however, should take one step at a time and avoid aggressive trades, as there are resistances seen one after another on the way up.

As the index has a cluster of resistances, it will be better to be specific on trades, with supports around 15,500 and 15,360, he added.

Here are the top 10 trading ideas by experts for the next three-four weeks. Returns are based on the June 24 closing prices:

Bata India has been in a corrective phase for the last six months after making a record high at Rs 2,262 in November 2021. It has retested the trendline support zone around Rs 1,600 levels lately and is seeing a rebound.

The chart pattern and existence of strong support indicate the possibility of steady recovery. We, thus, recommend accumulating the stock within Rs 1,735-1,745 zone. Despite the correction, the auto pack has been holding strong and most stocks are trading in tandem with the sector's trend. The stock has seen consolidating in a broader range of Rs 2,300-3,000 zone for the last five months after retesting its record high in January 2022.

The chart pattern indicates retesting of the upper range soon and possibly a breakout too. We recommend creating fresh longs within Rs 2,830-2,860 levels. 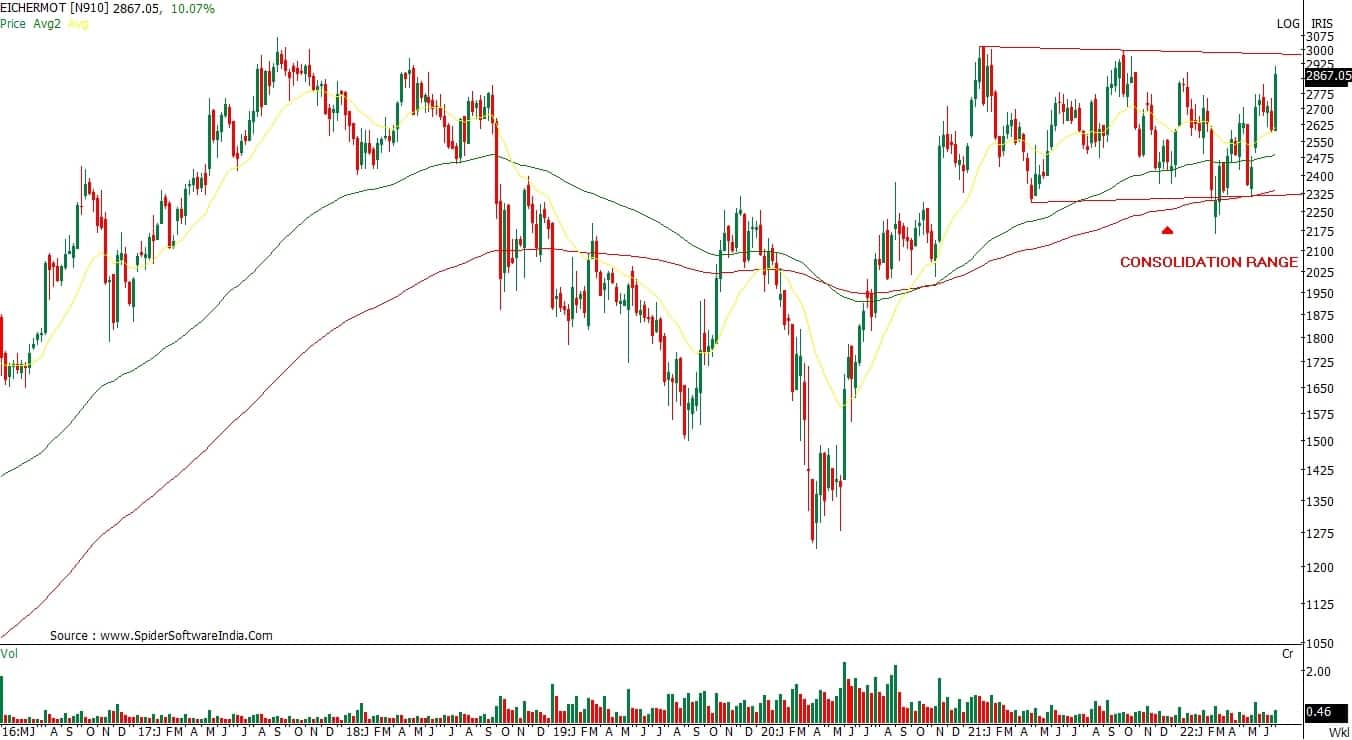 The stock again tested its 50 percent Fibonacci Retracement level of prior mega up-move (Rs 312-6,244), which was placed at around Rs 3,250 and is poised for a rebound. Spike in volume and rise in future open interest signals that major market participants are in favour of the bulls.

In the past, despite a lack of participation, the stock jumped to Rs 4,000 after testing the retracement level. Key technical indicators gave a buy signal post a bullish divergence on the short-term timeframe chart.

We believe the stock can move to Rs 4,000. In case of a decline, it will continue to find support around the Fibonacci retracement level.

After a higher level of reversal—a 74 percent fall from its prior peak level of Rs 999—the stock formed a base around its long-term demand zone (placed between Rs 265 and Rs 290) and is poised for a rebound.

The bullish reversal formation around the demand zone and positive poised technical indicators signal that the stock is on the verge of a turnaround.

This could lead the stock towards Rs 390-405-430 in the short term. On the lower side, the stock will respect its long-term demand zone.

Recently, the stock reversed before testing its lower band of the range and extended gain subsequently.

Its daily RSI again reversed from its bull-market support zone (40-33) and gave a "buy" signal.

As per the current setup, the stock will move in the upper band of the range. A fresh long position can be initiated and on dips for the desired action.

The stock price has broken out on the daily chart with higher volumes where it closed at its highest level since June 2, 2022. The primary trend is positive, as the stock is trading above its all-important medium and long-term moving averages.

During the recent correction, the price took support at the 100-day exponential moving average (EMA). The stock price has formed multiple bottoms around Rs 275. The plus directional indicator (DI) is placed above the minus DI, indicating strength in the current uptrend.

The stock price has broken out on the daily chart with higher volumes where it closed at its highest level since June 9, 2022. The stock has formed multiple bottoms around Rs 360.

During the recent correction, the price took support at the 100-day EMA. Momentum oscillators like RSI and money flow index (MFI) are placed above 50 and sloping upwards, Indicating strength in the current uptrend of the stock.

The stock price is on the verge of breaking out from the downward sloping trendline on the daily chart, adjoining the highs of April 21 and June 6, 2022.

The short-term trend is positive, as the stock is trading above its 5 and 20- day EMAs. Momentum oscillators like RSI and MFI are placed above 50 and sloping upwards, indicating strength in the uptrend.

It is also diverging positively on the daily chart, indicating a change in the prevailing trend, which was down. 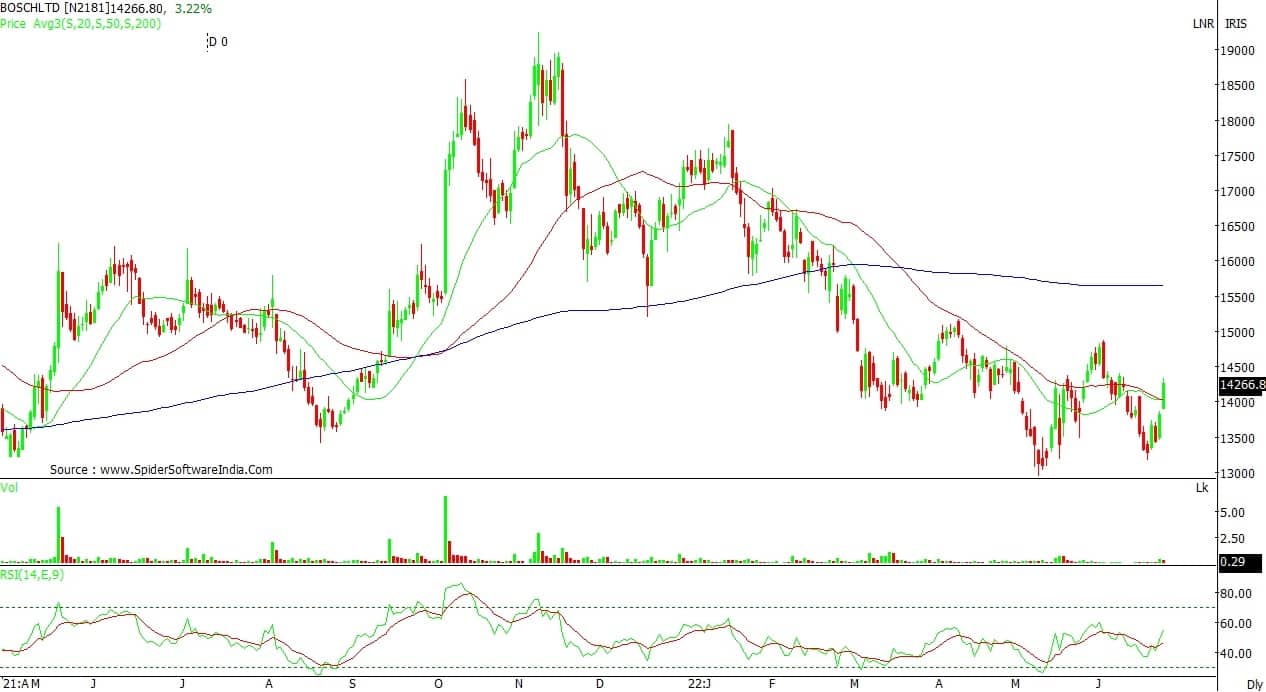 The stock was at Rs 273 in February 2022 but slipped to Rs 196 in March. In April, it failed to cross Rs 273, pushing the stock into an extended corrective pattern.

Technically, after touching Rs 172, it rose to Rs 185, which is a sign of completion of the corrective pattern. It was an outperformer in the previous up move in the financial sector and those who have a medium-term outlook for investment should invest in Canara Bank. 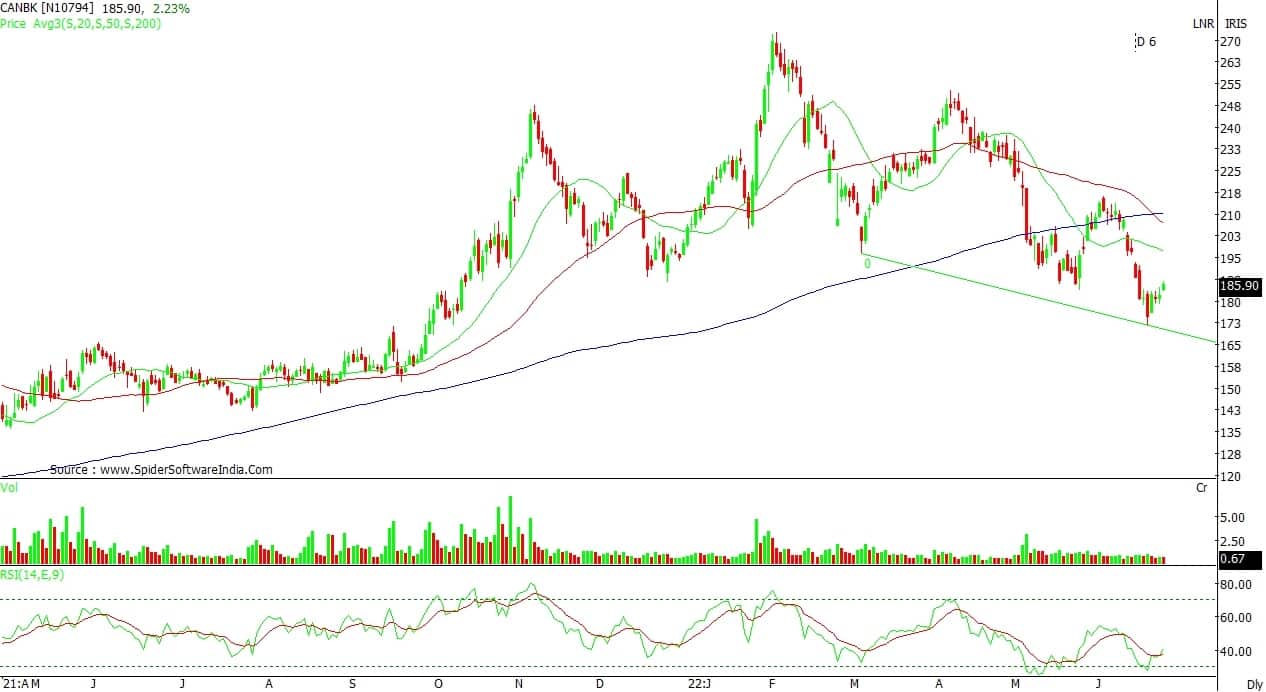