The maximum FII outflow in the second half of August was from banks, automobiles & components, pharmaceuticals & biotechnology, and capital goods.

India’s stock market had a strong run in August with the S&P BSE Sensex consistently hitting record highs and gaining 9.4 percent, including almost 4 percent in the second fortnight, when foreign institutional investors sold a net Rs 6,063.76 crore of shares against net purchases of Rs 3,495.24 crore in the first fortnight.

The market was supported by the US Federal Reserve Chair’s dovish commentary, increased pace of vaccination and controlled Covid-19 infections in the second half of last month, whereas there was some volatility in the first half.

“Initial selling in the previous month was primarily due to global factors turning negative like Chinese stance on metals price hike, increasing Covid third wave and uncertainty about US Fed’s taper roadmap,” said Narendra Solanki, head-equity research (fundamental) at Anand Rathi Shares & Stock Brokers. “All these factors led to a broad selloff in sectors and a larger selloff in sectors where we had already seen a sharp rally. So it appeared investors booked some profit.”

The maximum FII outflow in the second fortnight of August was from banks, automobiles & components, pharmaceuticals & biotechnology, and capital goods. These sectors, except pharma, had seen outflows in the first fortnight as well.

“Banks, which are the highest-weight sector in FII portfolios (17.79 percent) and also the highest overweight position compared to MSCI, saw outflows to the tune of $565 million,” Emkay Global Financial Services said in a research report. “This could potentially continue over the next fortnight.” 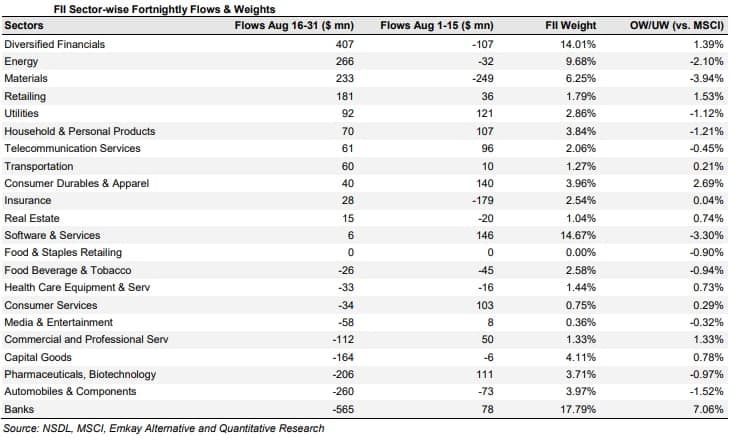 The brokerage said automobiles & components saw follow-up sales to the tune of $260 million in the second fortnight after selling in the previous fortnight ($73 million).

“I think FII as a category is very fluid and not anchored to MSCI, more so if you remove ETF-based funds,” said Solanki of Anand Rathi. “Historically, FIIs have always been heavy on banks & financials and the primary reason could be them playing a proxy growth on the overall economy, especially unlisted sectors like MSME.”

However, “recently we have seen that credit growth continues to remain low and looks like recovery is likely by H2-FY22. Hence, some small shifts or sector rotation can’t be ruled out,” he added.

The BSE Diversified Financials Revenue Growth Index gained 3.25 percent, and the BSE Energy index jumped 6.35 percent in the second fortnight against gains of 1.34 percent and 4.14 percent, respectively, in the first fortnight.