172@29@17@106!~!172@29@0@53!~!|news|business|markets|small-midcaps-down-but-not-out-6-stocks-gave-multibagger-returns-in-fy19-3702571.html!~!news|moneycontrol|com!~!|controller|infinite_scroll_article.php!~!is_mobile=false
Upcoming Webinar: Analyse the security landscape of digital payments at 11 am on October 20. Register now!
you are here: HomeNewsBusinessMarkets

Small & midcaps down, but not out: 6 stocks gave multibagger returns in FY19

After a disappointing run in FY19, most experts feel that the worst might be over for small and midcaps and investors can start accumulating quality stocks on declines.

Down, but not out! That boxing analogy has been true for the broader market in past year. Broader indices underperformed benchmarks by a wide margin.

But a handful of smallcap stocks outperformed. As many as 28 stocks from the Smallcap index gave over 50 percent returns in the past year. And 6 out of 28 gave returns in triple digits. In the midcap space, 25 stocks rose 10-100 percent in last one year; out of which, three gave returns of over 50 percent — Adani Power, Havells India and Divi’s Laboratories. 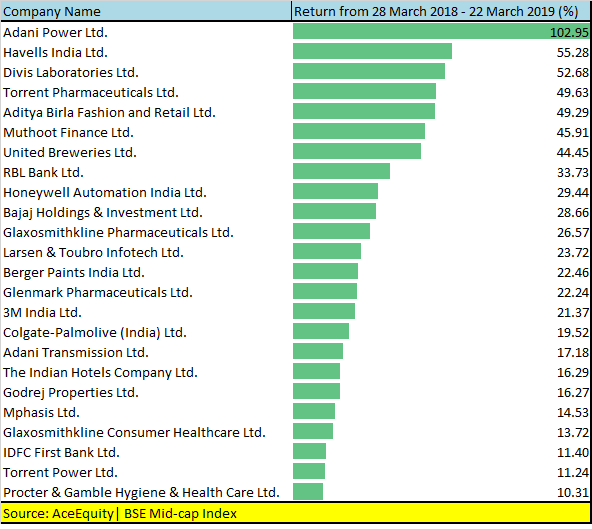 Selectively, mid & smallcaps have outperformed but as a theme, they suffered due to many factors. Higher valuations, SEBI reclassification norms, lag seen in earnings growth momentum, and corporate governance issues which surfaced in select stocks marred the attractiveness of the space.

Foreign institutional investors were also net sellers of Indian equity in almost 8 out of the last 12 months, Moneycontrol.com data showed. They have pulled out close to Rs 50,000 crore from Indian equity market so far in FY19.

After a disappointing run in FY19, most experts feel that the worst might be over for small and midcaps and investors can start accumulating quality stocks on declines.

The relative valuation of midcaps compared to largecaps are at a historically low level, both at an absolute level as well as on a rolling basis, with 7 DMAs at 2014 levels, the report added.

The financial year 2019 has been particularly good for largecap stocks as compared to the broader market. But, the trend could reverse as we move into FY20.

Macquarie recommends moving their stance from large to midcaps, and on the sectoral front, it prefers moving from defensives to cyclicals. Real estate and its derivate sectors are likely to outperform in 2019, it said.

Earlier in March, Morgan Stanley in a report said that it expects Sensex at 42,000 by December 2019. The global brokerage further said the performance gap between largecaps and broader market has started to narrow but has a fair bit of distance to cover, so it expects the broader market to outperform.