Rupee spooked by yuan, US-China trade war could snowball into a currency war

The Yuan has broken a key psychological level and unless the PBoC chooses the stability of capital markets over the pain in the real economy as a result of tariffs, moves lower in USD/CNH are likely to be short-lived.

The Indian Rupee weakened 1.6 percent on August 5, weighed down by the panic in global financial markets triggered by the breach of the psychological level of 7 on USD/CNY.

Though nationalised banks tried to stem the volatility, the outflows on custodian desks were too heavy for the central bank to contain and the rupee closed at its weakest point at 70.73. This was the biggest fall for the rupee this year and weakest close in five months.

All this while, the rupee was insulated from the mayhem in equity markets as corporates were raising funds in foreign currency due to lower interest rates.

Outflows from equities were being negated by inflows into bond markets and by such capital raising related inflows. 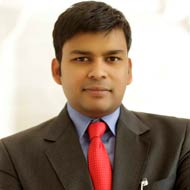 The corporates that raised foreign currency funds would now look to put hedges in place. Volatility in the rupee could result in inflows into bond markets tapering off too.

There is fear and uncertainty over the US-China trade talks. The spread between the one-month offshore and onshore points has widened to 10p, which signals heavy buying offshore. The three-month of At The Money Forward (ATMF) volumes, which were around 5.20 percent, have now risen to 6.50 percent.

We believe the abrogation of Article 370 that gave special status to Jammu and Kashmir played a little role in the sharp fall seen on August 5. In fact, Indian equities and bonds performed relatively better than its emerging market counterparts.

However, in view of the panic in global markets, one is advised to reduce strategic carry and low volume positions.

Fundamentally and quantitatively, USD/INR is a buy on dips. Our quant model generated a trend reversal on August 2 when rupee broke 69.20/USD and Vols got elevated but August 5’s large move was mainly on account of heavy Chinese depreciation.

The yuan has broken a key psychological level and unless the PBoC chooses the stability of capital markets over the pain in the real economy as a result of tariffs, moves lower in USD/CNH are likely to be short lived.

The Reserve Bank of India seems fine letting the rupee depreciate in lockstep with the yuan. CNY/INR at 10 seems to be a line in the sand. Therefore, the reaction function of the central bank would depend to a great extent on how USD/CNH behaves.

Considering the upside risks to USD/INR, exporters are advised to keep trailing stops to hedge exports with a current stop at 69.70.

Any covers should be very slow or with options. Importers are advised to hedge exposures up to two months at least. On the upside, the next levels to watch are 72, which may act as major resistance.

If we see a sustained move above that, we can infer a steeper depreciation phase for the rupee. Importers or borrowers in euro should also be careful since euro is a carry currency. If the risk aversion continues and carry trades are unwound, the euro will appreciate and the rupee will depreciate, inviting double whammy for euro imports or loans.

Disclaimer: The author is founder and CEO of IFA Global. The views and investment tips expressed by investment expert on moneycontrol.com are his own and not that of the website or its management. Moneycontrol.com advises users to check with certified experts before taking any investment decisions.